Yesterday my 13-year-old daughter said to me: ‘Hey fam, can I yeet a heckin’ sandwich?’ Reader, I stared at her for a full ten seconds. I knew most of the words. I’d even used them myself. But I had to stop and translate, because she is a product of the internet and on the internet, language and meaning are different. Then I told her to get her own sandwich.

Today, Greens staffer Paul McMillan offered to resign after his tweets were made public (they were already public). A long-time feud between the Greens and the ALP has exploded, culminating in premier Daniel Andrews ruling out a deal should Labor fail to win a majority at the next election.

There’s something disingenuous about the way this has unfolded. Why the sudden interest, ALP? Some of the tweets have been online for six years. Could it be that Victorians will head to the polls this weekend? ¯\_(ツ)_/¯

It’s not only the timing that’s questionable. This is wilful misinterpretation. I don’t know McMillan irl but I’ve @ed him a bunch of times. Many people have come to his defence online today. He’s good, probably. And he’s a shitposter.

‘Shitposting’ is when someone posts content that adds nothing and is deliberately terrible. It’s a kind of anti-humour. It lives on subculture forums and corners of Tumblr and very loudly on Twitter, as the playground of the likes of @dril. It’s sardonic, self-consciously unfunny, and that’s what makes it great.

(It’s not to be confused with trolling, which is when no-life basement-scroungers try to stir up arguments for their own entertainment. Or sealioning, which is when people pretend they don’t understand something in order to start a fight about it. Or any other of the myriad words we’ve invented to describe the way a person behaves online.)

At the risk of sounding like I only go online for buy swap sell groups, shitposting also frequently offers commentary on some bigger issue. 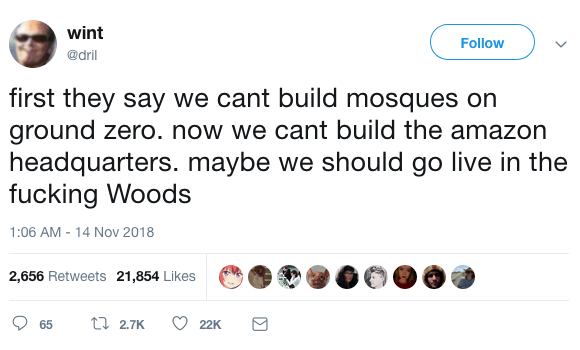 ‘When are allegedly female trollumists going to learn that breasts are not a magical f—— tractor beam,’ is, taken at face value, indefensible. I think. It’s a little hard to tell because it’s been censored due to arbitrary ‘good’ and ‘bad’ words. But does the problem lie with the tweet, or the person deep-liking it?

Thanks to the internet, language is changing faster now than it ever has. We can still read Early Modern English from the 16th century but can’t explain ‘galaxy brain’ to our grandmothers. We’re not just adapting the meaning of words but of symbols and images. Yes, the eggplant emoji is secretly a dick but what about the upside-down smiley face? It was supposed to mean ‘silly’ but now it means ‘lol actually the opposite of what I just said, everything is horrible’. That’s not its intended meaning, but its accepted interpretation.

Like dialects, each social media channel has its own subtexts. On Tumblr, adults communicate via screenshots of movies for teenagers. On Facebook, your parents share wine mum memes. On Twitter, people despair at the state of the world through sarcasm and jokes about suicide. That’s Twitter’s ‘language’. It’s a way of drawing attention to something you hate without hiding it under layers of earnest column inches. Like satire, it’s a way of cutting through the opining to hold up a mirror. To find camaraderie. To laugh so you don’t cry. We’re talking about Trump parody accounts, Elon Musk screenshots, the timeless resigned beauty of ‘Kevern’ @Rudd2000. Shitposting on Twitter is a coping mechanism.

Offering a translation for every other platform isn’t part of the deal. Just as you would never put your Undertale ships on Pinterest, tweets need Twitter to make sense.

When we started using BBSes and IRC more than twenty years ago, we had to learn to type fast (yes, to cyber). Acronyms and abbreviations helped with communication. Actions like *laughs* started appearing in text conversations. Having this new language made it easier to convey our meaning. ‘roflcopter I h8 u’ was nonsense but the important thing was that we understood it.

Since then, language has changed to the point of obfuscation (a word invented in the 15th century). We’ve dropped punctuation and capitalisation, and changed the meaning of established words like ‘literally’. We know what acronyms mean without having to think of the corresponding words. Teenagers have whole vocabularies that didn’t exist when their parents were born.

The attack on McMillan is gross because Twitter has been around for a decade and the delineation is clear and well-known. People who know better are pretending the tweets mean something they don’t. Yes, the language is vulgar. Yes, the messages seem ugly. But they’re not designed to denigrate marginalised people and those in charge know it.

McMillan’s boss, Greens MP Lidia Thorpe, said to the Herald Sun that: ‘These comments were meant as satire, but there is no place for this type of language regardless of the intent.’ But context is important. Australians say ‘mate’ when they mean cunt, and ‘cunt’ when they mean mate. We know this. We are, actually, extremely well-versed in subtext. Our coloniser language is steeped in colloquialism.

Have you ever watched a meme travel its short course of reddit à Tumblr fandoms à Twitter à Wendy’s Twitter account and finally Facebook? It can mean something different at every station. There are inherent values depending on where and how information is presented. Using a meme after it’s been appropriated by a global brand means something. Choosing Twitter and not Instagram as a platform for shitposting means something.