The post-colonial statue has long been a vexed component of Australian civic iconography. Depictions of Lachlan Macquarie and James Cook have been angrily daubed in recent days, but this sort of graffiti has a longer, wider history.

In this extract, Matt Chun looks for the reasons why, and discovers a new view of Macquarie, as a frontier-war fighter.

From the coming September edition of Meanjin:

Macquarie has long been celebrated as a renaissance man and humanitarian. But, despite the assertions of police, Macquarie’s enduring historical status is questionable. On 8 May 1816, for example, Macquarie ordered that Aboriginal inhabitants:

‘… surrender themselves … as Prisoners of War. If they refuse to do so, make the least show of resistance, or attempt to run away from you, you will fire upon and compel them to surrender … Such Natives as happen to be killed on such occasions, if grown up men, are to be hanged up on trees in conspicuous situations, to strike the Survivors with the greater terror … Such Women and Children as may happen to be killed are to be interred wherever they may happen to fall …’

By his own account, Macquarie planned and ordered the massacre, torture and incarceration of Aboriginal people and the abduction of Aboriginal children. At the Appin massacre in 1816, children, women, warriors and the elderly were surprised in their homes at night; shot, decapitated and hung from trees, or driven ‘in despair over a precipice’.

In comments to the Hawkesbury Gazette, Barry Corr, an Indigenous man, historian and Windsor resident, said: ‘Coming to terms with the horror and the implications of the 1794–1824 Frontier War is something the Hawkesbury community has consistently failed to do.’

In identifying his victims as ‘Prisoners of War’, Macquarie contradicts his own attempt to reframe a military campaign of dispossession as mere ‘conflict’ and ‘settlement’. These semantics are perpetuated today as orthodoxy, enshrined in the colonial monuments and rituals that continue to occupy and define Australian public space.

In using the term ‘Prisoners of War’, Macquarie acknowledges the lie of terra nullius. Far from being an empty continent, Australia was home to a strong, dissenting population, ultimately subdued through a program of institutionalised brutality.

In the ‘defaced’ statue we are presented with a perfect cultural intersection: two forms of public art, diametric in their opposition, competing for civic space and over the historical record. The original artwork is sanctioned, staid and steeped in colonial mores; the updated sculpture is gestural, spontaneous, contemporary and illegal. Crucially, the graffiti artists have not damaged or concealed the memorial, they have appropriated it, made it their own. The monument remains intact, but its meaning has been inverted. It was the act of appropriation that first caught my attention. It is one thing to smash symbols of oppression; quite another to recruit them. 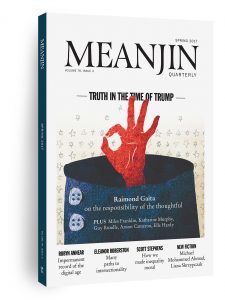 Read the full account and much more besides in the Spring Meanjin, out soon.

Subscribe here and have it delivered to your door.