My boys think it’s uncool to get a lift home from school. They’d rather be on the bus with the others, standing in the aisle with their earphones in one ear and their school bags over one shoulder. Sometimes they try to walk home but I’m worried they’ll hurt their backs, carrying all those books.

Why do you do that with your bags, I ask them. Why do you have to do everything like you don’t care? Why can’t you be proud of doing well? When you’re older, you’ll learn that it’s cool to do something well.

They’re good kids but they don’t get it. They can’t see it. They’re the luckiest kids in Macadamia. They’re always comparing themselves to the others, saying that someone else’s mum lets them buy lunch every day, or download whatever they want, or use their phones at the dinner table.

I think of writing as an assortment of gatherings—a sentence from here, a word from there, a beginning and ending from notes made years apart. The page is a windscreen and the sentences are streets that the writer drives down with the reader watching. The reader can get out of the car or close their eyes but they can’t steer in another direction. What the reader sees with the writer driving becomes the sum of what the writer has to tell.

Perhaps the traffic then is everything outside the writer’s control, everything in flux beyond the words.

The ancient Greeks thought of the present as a constant revision of the past while walking backwards into the future. Writing is like that, writing and mothering, except that instead of walking backwards I’m driving with my head thrown back and one arm around the passenger seat while my boys watch me steer in reverse, sullen and unknowing.

There are days when I think of my past as endlessly navigable, almost malleable, and others when I feel cheap and self-serving and wrung dry from the telling. That’s why it’s good to live in a town like Macadamia. There aren’t so many people that you can’t know them all. Everybody tells what everybody knows, so there’s always something to tell.

Like the Schafer woman, the one with a boy who goes to school with my eldest. Two years ago she had a transplant, something they call bilateral. She’s still alive but she has to see all kinds of specialists in the city.

She told me once that she’d had an appointment with her cardiologist, who turned up an hour late, looking sad and dishevelled. He asked her a few questions—they all have their own special few—but he didn’t seem to be listening to the answers.

‘But how are you, Harry?’ she asked him.

‘My life is falling apart!’ he said.

Last week I followed my boys home from school. Not because I thought there might be something wrong, but because I thought there might be something to tell. I parked behind the Lifeline and came through the hole in the fence behind Fairfield’s. Fairfield closed the service station after the highway bypass opened, and his eldest moved the smash-repair centre to a garage in the city. You can still see the outlines of Fairfield’s tools in the window of the office, drawn in permanent marker against the pegboard. It didn’t take long for someone to graffiti the awning after he left.

There’s a paddock across the road from Fairfield’s that my boys cut across to get home from school. They’ve always done it; I told them to do it. I used to meet them by one of the fence posts before they started complaining about being seen with their own mother. Last week I told them I had something to do so they had to make their own way home. They cut across the paddock and climbed the fence, the eldest swinging each leg over the top and the youngest sitting up on it before jumping down with both legs pointed. 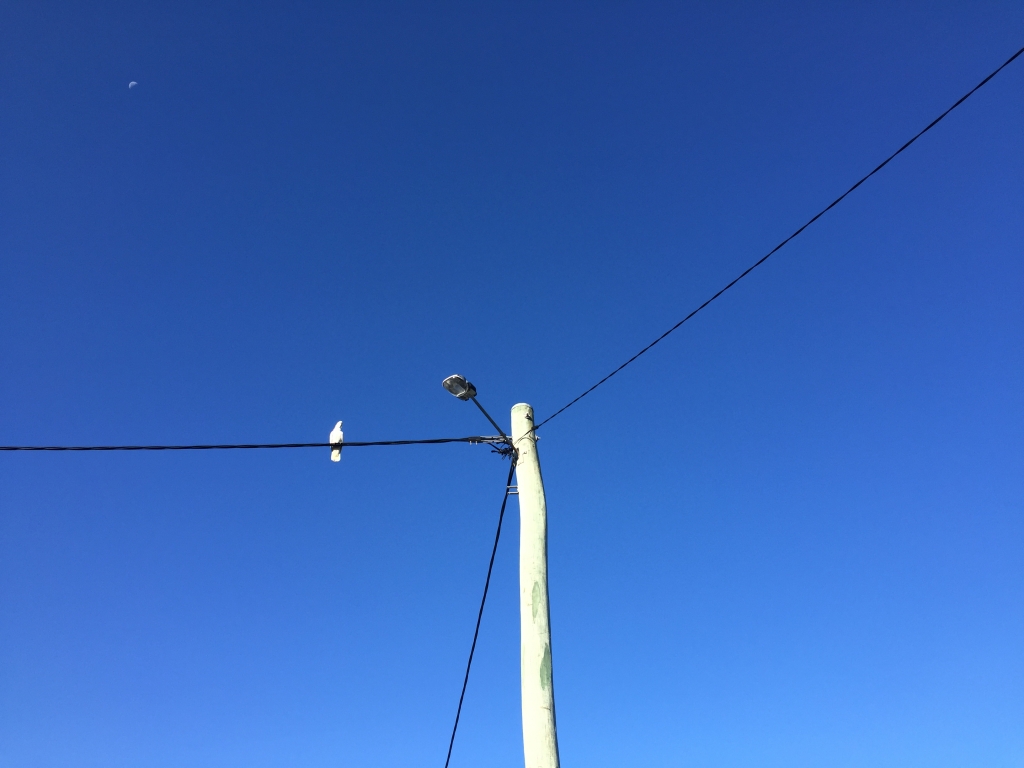 I’d made myself sick with the thought of who they might be walking home with, who was responsible for their bad posture and indifference. They came down from the fence and made their way along the footpath with their bags on one shoulder and their hair in their eyes. As I watched from behind the fuel pump I realised they were alone. Their assuredness and vulnerability was heartbreaking. They had only themselves to blame.

‘Aren’t you going to ask,’ my eldest said. He was walking ahead, maybe two metres in front of his brother. He balanced a basketball on one palm, upturned, and slapped the other against it.

‘Ask what?’ the youngest said.

‘About what asexual means.’

‘Well okay then what does it mean?’ the youngest said. He was always walking with his hands in his pockets, kicking at the ground. I wanted to cry out: Chin up! Shoulders back! Imagine there’s a helium balloon tied to your head!

‘It means you’re not sure if you’re actually attracted to anyone,’ his brother said.

As they approached the corner they passed a bush that grew the same small, bright-vermillion fruit that my brother and I used to pick on our way home from school and throw under the tyres of passing cars or beneath our shoes on the footpath.

My youngest lingered. His brother had already turned the corner. The fruit grew in clusters that caused the branches to droop like the eyebrows of a spaniel. He plucked a bunch of fruit at his hip and twisted the stem between his fingers as he began to walk slowly, transfixed. He dropped the fruit and sped up to find his brother.

I decided to head down a side street and through a reserve or two to cut the boys off before they turned off the bike path towards home. It meant leaving the car behind but I doubted they’d be suspicious if they saw me walking. I knew what they’d think. It would be the elder, and he’d stop walking for a moment and speak to the air in front of him.

As I stepped from the footpath I saw a blur, a black cat, move frantic from beneath a parked car to the other side of the road. I walked across the road to where I could see a dark shape on the nature strip.

The cat was lying on its side with its legs extended, as if wanting to be scratched. It didn’t move as I stopped and bent my knees with my hands and fingers beckoning. The cat’s teeth were half-bared and its eyes were open. A swarm of ants emerged from inside its mouth and nose, busy along the eyelids.

The sound of a bus grew and grew and as I straightened up and turned it reached its peak and slid from one register into another as the bus crossed my line of sight. The bus was mostly white with a belt of orange, browning. It seemed to bounce uncontrollably along the road at an angle. I thought I could hear music from the driver-side window. Taped onto the back window was a sheet of paper: OUT OF SERVICE.

I caught sight of my youngest through a chain-link fence. He was trailing behind his brother, happy for the moment not to have to look as though he was listening.

‘I was in your grade when the first season came out,’ the eldest said from behind a hedge. ‘Three years ago. I remember thinking that being on reality TV, being yourself on TV, was the most grown-up thing you could do, and I watched all the audition tapes and stuff to reassure myself that I could do it too, when I grew up.

But now I’m older and I don’t watch those shows any more, which is what I’m telling you. And I think the people on them are wrong. I mean I think it’s good to care about what other people think of you, because if you don’t then how are you ever going to know? How is anyone ever going to be your friend?’

In times of bewilderment or awe, I usually think of my father. His stubbornness a virtue. Incompetence as potential. His favourite curse was ‘Jumping Jacks!’ as if a species of ant was more profound than another word for sex. He used to sing loudly out the window to drown out my mother’s complaints while he drove the family sedan, often slightly lost. The song was always the same:

I know where I’m going

and I know who’s coming with me

My mouth was full of my father’s words as I took the shortcut towards the main road, past the stilted houses and public barbecues stained from misuse.

Eventually they stopped and lingered over a levee of gum leaves and plastic bags accumulated beside the path. A can of crimson paint had been left open with its lid face-up and glistening like a wet tongue on the concrete. Resting against the inside rim of the can was a slice of fence paling, thinning into the red.

My youngest nudged the can with his shoe while his brother told him that he knew he was a grown-up the first time he went through the McDonald’s drive-thru by himself.

I bent over, squinting, with my hands on my knees, no longer hidden but unseen over the railway mound. The sun cut shadows from the powerlines across the boys’ faces and the fences of properties that backed onto the path. I had always taught them to take notice of the undervalued and the disused, the detritus of our inevitable careen towards death, hoping that they’d learn to find meaning in its arrangement.

‘Okay,’ his brother said, and they stood for a long time looking at their shadows and the bike path and the fence paling dipped in wet paint, but neither of them bent down to pick it up.

Oliver Mestitz makes music as The Finks. He lives and works on the stolen land of the Wurundjeri people of the Kulin Nation.