That first night, he reached up into the winter dark. His hand drifted past Sirius, flashing like a huge diamond, a star without equal. He selected Aldebaran and plucked it straight out of the sky. It was effortless the way he pinched the star between his thumb and forefinger, brought it down to Earth and held it dazzling in his palm. The starlight beamed bright between the gaps in his fingers, making us squint as it refracted off the knit of quartz and feldspar in the western granite mountain range. We stood in awe of its beauty. But what to do with a star pilfered from the night sky?

He wrapped the star tightly, his fingers curling in radiance, and making a translucent orange fist, he pulled his hand back to his shoulder, his biceps and triceps rippling and swelling with intent. We watched as he flung it with all his strength. The star went streaming through the sky, lighting up the fields beneath it. We all sighed a little watching its trajectory.

All manner of nocturnal mammals fled from under the star’s path; dunnarts, wallabies and bandicoots scurried for cover. Thick swarms of insects darted away, clearing the air. The children ran after the star, their thudding footsteps raining down to flatten the grass as Aldebaran arched over them and began a fiery descent, pitching into the ocean. The water’s surface became a shimmering mesh, fizzling and crackling as the star burst through.

As it sank, the star’s momentum slowed but it did not dull. All around it the briny water was lit up; dancing seaweed glinted under the waves; a great confusion broke apart a school of snapper that scattered in its wake, their scales flashing like a thousand twinkling Christmas lights. A thresher shark swimming nearby jack-knifed its steely body, darting in the opposite direction. A blue whale heaved its tail towards the surface, causing a wave to swell and stir up a rush of bubbles like tiny rising moons. All smaller ocean life was dislocated by the surge. The low, melancholy voice of the whale echoed out through the ocean, broadcasting that the world was awry.

The star plunged deeper until it found a place to settle on the ocean floor among the grains of sand, burning its impression into the millennia of ground-up shells and rocks. The star pulsated, as it had for billions of years, nuclear fusion binding hydrogen and helium tightly together. All around the star a radius of ocean emptied out, too bright and hot for any creature to trespass on its realm, evicting crabs and crayfish, making fish and sharks flee. The dead bodies of those too slow to escape lay scorched across the ocean floor. 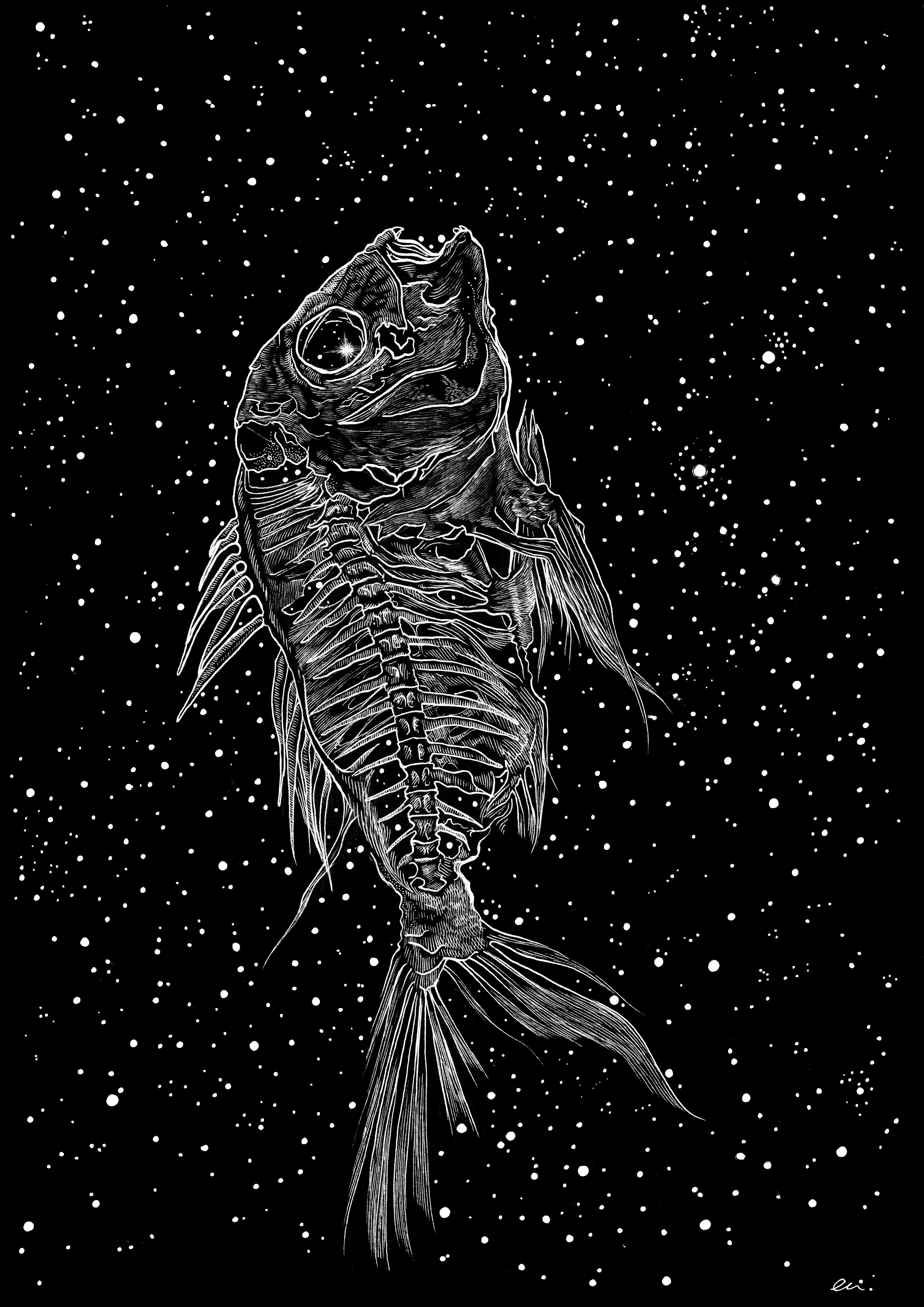 From the land we gushed at the beauty he had created. What was usually a dark, heaving soup of fantastical drenched beasts was now a humming phosphorescence. The fields were washed with muted starlight and we all agreed it was the most magnificent display we had ever seen with our own eyes.

Each night we wandered down to the water’s edge to admire the inverted starlight rising across the horizon, careful to step over the carcasses of sea creatures gathering along the shore. After a few weeks we began to question the quality of light; we thought the star had started to fade. It no longer seemed so vivid. We went back to him, asking if he could do it again, hook another star to make it a little brighter for us.

This time he reached his arm up into the sky, hesitating over which star to choose. His hand drifted over Canopus, equal in light to 40,000 suns, and traced a winding stream of stars flowing south like a river. He snared Alpha Centauri, the double star, and its cousin, Beta Centauri and brought them down through the heavens to us. He cupped the balls of gas in his hands, letting us marvel at them before casting them overhead in a magnificent arc and into the ocean to follow Aldebaran. A midnight dawn bloomed brightly from the sea, eclipsing the night sky.

One morning soon after, a wooden fishing boat washed up on our beach and was trailed by the bodies of its crew, rolling in on the tide one by one over the course of the day. Then every few days, the sea spat out another boat and its drowned men. The night sky was rendered unreadable without the stars of the Southern Cross and as the wandering boats ran aground, the sand became littered with detritus: splintered timber, the torn fabric of sails and clothing, skewed limbs and bloated torsos. A smell of rotten flesh hung over the high tide line; flies hummed all around the decay.

We craved more light; we asked him again. His right hand swept over the southern celestial pole and hovered over a corona of faint stars; he snatched its brilliant anchor, Alpha Crucis. With his left hand he reached up and chose Rigel; the youthful sun instantly enchanted us with its beauty and promise. The light of the newly captured stars caught the flinted heads of a row of upright spears. From the shadows, their sentinels watched us. At night these vaporous ghosts materialised from nowhere, but recoiled from the illuminated shoreline as if in terror.

By day we watched them clamber over rocks and wade through pools, their spears rising out of the water empty. They poked through the debris along the beach until our men fired warning shots and they disappeared into the gorges and caves that held their ochre handprints among the fossils of extinct creatures from the seas of other ages. Their language and symbols were indecipherable to us; we were fearful of their ceremonies of mournful songs and painted bodies twisting around in flickering firelight. Our conquered starlight was an amulet to protect us.

As we begged for more, he fetched star after star. Over time, the ocean held the entire sky’s harvest: a multitude of beaming points of light, glowing luminescent. The sky fell darker and darker until it was blank, save for the moon, which hung lonely, a solo orb resplendent in the pitch black; commanding the ebb and flow of the tide.

Our access to the shore became increasingly fraught to navigate as the bodies of sea creatures piled up; mysterious invertebrates and deep-sea dwellers, their tentacles, shells and silvery scales entwined in seaweed. They lay strewn among the sun-bleached bones of the shipwrecked and the wasted bodies of the ghosts picked over by gulls. It was a scene conjured in a fever dream.

We cleared ourselves a path to the water’s edge and marvelled at the submerged starlight catching the curve of the Earth’s horizon.

‘Why has the world gone so quiet?’ the children asked.

Justine Hyde is a library director, writer and critic living in Melbourne and on Twitter @justine_hyde