Barry is the most fascinating character I’ve ever played.
—From an interview with TV Break, October 2009 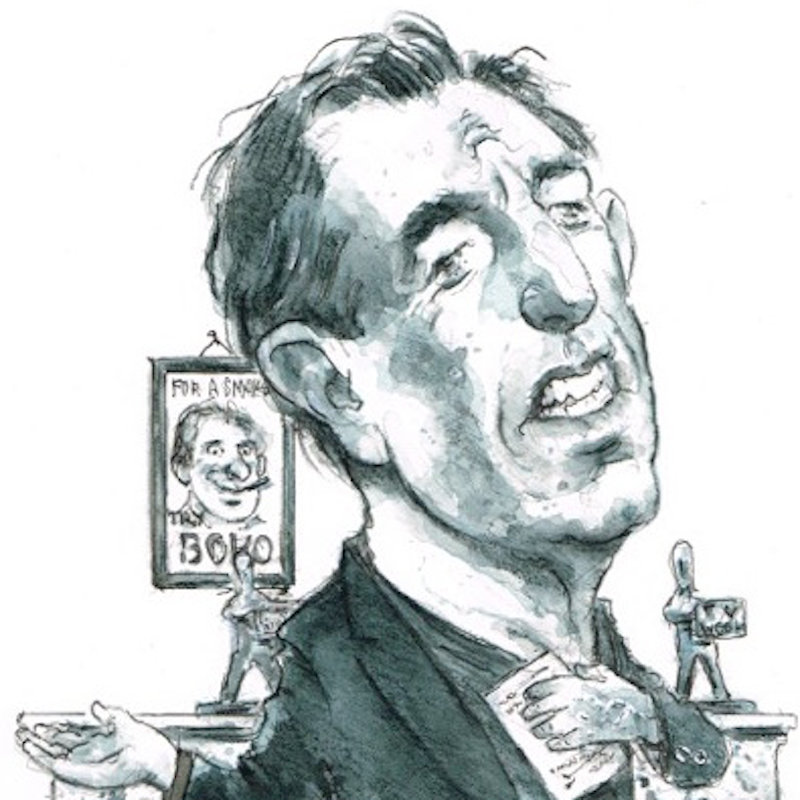 Actor, screenwriter and director Barry Burbage was born Bartholomew Richard Burbage in Sydney, New South Wales, on 16 August 1959. His father, Victor, was an actor who had once been John Gielgud’s understudy in a West End production of Romeo and Juliet, and his mother, Vera, was a former beauty queen. Barry’s parents encouraged him to pursue a career in show business, and he snared his first acting role at eight years old: a television advertisement for Boko’s Chocolate Cigarettes. Barry’s gap-toothed smile and lisping pronunciation of the brand’s famous catchphrase, ‘Try Boko, the next bestest thing to a smoko’, resulted in hugely increased sales of the product between 1967 and 1970, and has been blamed by some for a corresponding 20 per cent leap in lung cancer rates at the turn of the century.

Barry starred in 26 advertisements for Boko over the next three years, before landing the starring role of ‘Billy’, the best friend of the titular emu in the television series Eddie the Bush Emu. Despite legal action from the producers of Skippy the Bush Kangaroo, 90 episodes of Eddie were produced from 1970 to 1975, and sold to more than 100 countries. By early 1974 Barry, although only 14, was reported to be the highest-paid actor in the country. A year later, every Australian television network had switched to broadcasting in colour, revealing to viewers for the first time Barry’s bright red hair. Ratings for Eddie the Bush Emu plummeted, as letters appeared in TV Break magazine suggesting the show should be renamed ‘Billy the Bush Ranga’. Eddie was cancelled in November 1975; the producers blamed Barry for its demise, while downplaying the results of an RSPCA investigation which revealed that 60 of the emus that had played Eddie died from neglect. To make matters worse for Barry, his parents had fled the country with every cent he had earned.

After the cancellation, Barry Burbage dyed his hair black, a practice he would continue for the rest of his life, and in 1976 applied to study drama at NIDA (National Institute of Dramatic Arts). His choice to audition using a scene from one of the old Eddie episodes backfired, and his application was rejected. Instead Burbage was accepted at NIDA (Newcastle Institute of Dancing and Acting), where he spent the next two years studying drama. It was here he encountered the Stanislavsky method of acting, which he employed throughout the rest of his career. In 1978 Burbage left NIDA without completing his diploma when he was offered the role of ‘Keith Jenkins’ in Channel 8’s ground-breaking soap opera 69 Huntingtower Road. The show, which was filmed live to air, had achieved notoriety for its frank treatment of previously taboo subjects including homosexuality, abortion and adultery. Burbage’s addition to the cast brought about another first for Australia: the depiction of an erect penis on commercial television. The moment was unscripted; in one episode Burbage was sitting at the kitchen table in his dressing gown while his screen mother, played by Cassandra Bawden, bent over to unload the dishwasher. The script specified that Keith had just stepped out of the shower, and Burbage, as a method actor, wore no underwear. Viewers of 69 Huntingtower Road were treated to 12 seconds of Burbage’s genitalia before a cut to commercials. Keith Jenkins was killed off in a boating accident in the following week’s episode, while Burbage and Bawden married a month later.

Burbage spent the early 1980s trying to break into the burgeoning Australian film industry, auditioning unsuccessfully for the lead role in Breaker Morant, Gallipoli and Mad Max 2. His arrogance alienated casting directors and, to his frustration, all he was offered were non-speaking parts. He appeared as ‘Man Riding awkwardly on Brown Horse’ in The Man from Snowy River and ‘Man Shaking his Fist at Angelo D’Angelo’ in BMX Bandits. Disheartened, Burbage returned to the small screen, earning Logie nominations for his roles in the prison drama The Girls Inside (1982) with Nonie Hazlehurst, Ian Smith and Ray Meagher; the daytime soap opera Destiny Beach (1983–86) with Ian Smith, Ray Meagher and Lorraine Bayley; and Manley Medicine (1988) with Ray Meagher, Nonie Hazlehurst, Lorraine Bayley and Ian Smith.

Privately, Burbage was in the grip of an increasingly damaging cocaine addiction that had begun as research for his role of ‘Third Drug Dealer’ in the 1983 Ozploitation film The Decimator. His increasingly erratic behaviour saw him written out of Manley Medicine, his wife Cassandra divorced him, and he struggled to find work. His lowest point came in 1989, when at an audition for Play School, drunk and high, Burbage got into a vicious fistfight with Big Ted, destroying half of the studio before police restrained him.

Burbage spent almost a year in rehab and was released in 1990, the beginning of a golden age of medical, legal and police dramas on Australian television. Burbage starred in many of the biggest hits of the decade, playing Dr Ben Franklin in the long-running Aqua Police, Constable Jim Collins in The Country Lawyers, and Archie McLellan QC in Intensive Care. Though his career was going from strength to strength, Burbage was unfulfilled artistically; he had long desired to write and direct his own project. In 1998 he sold his Ultimo home, and raised 1.5 million dollars to produce his first film, Miserable, from his own screenplay. Miserable told the story of Johnny Stephens, an alcoholic, paraplegic cocaine addict, his relationship with his violent, PTSD-affected father, his terminally ill mother, and his incestuous affair with his manic-depressive sister. The film was embraced by Australian film critics, who praised its stark black-and-white cinematography, and the rawness of its themes and dialogue, but Miserable made only $485 at the Australian box office. Despite its commercial failure, Burbage’s film swept the board at the Australian Film Institute Awards, winning all ten categories, including best director and best screenplay. In 1999 the film was picked up by Miramax, which released it in a subtitled version the following year in the United States, where it made more than 4 million dollars and received an Academy Award nomination for best foreign film.

Burbage fielded a number of offers from Hollywood, but his next project, announced in 2001, could not have been more Australian; he would write and direct The Drover’s Wife, an adaptation of Henry Lawson’s classic short story. The film was produced by Australia’s largest independent film company, Billy Boils Studios, which had scored an enormous success in 1999 with their adaptation of Banjo Paterson’s Clancy of the Overflow, starring Guy Pearce and John Travolta. Taking advantage of generous tax breaks, The Drover’s Wife was budgeted at 8 million dollars. Cate Blanchet signed on to play the wife, with Russell Crowe co-starring as the drover, a role substantially expanded from the short story. In a pioneering motion capture performance, Geoffrey Rush was to play the black snake. Before filming began Burbage demanded that Blanchett and Crowe live together in an isolated cabin for six months to prepare for their roles. When Crowe demurred, citing family commitments, he was immediately replaced with Mel Gibson. Blanchett walked off the project in protest, and after a lengthy search Burbage made the bizarre decision to hire the American Kate Hudson to play the wife.

A further nine months passed while Burbage searched for ‘the right kind of sand’ for location work. At last the perfect site was found outside Bourke, but shortly after the sets were constructed they were destroyed by floods. Ignoring the protests of his producers, Burbage moved production to Sydney’s Fox studios, where he took five months to re-create precisely the 12-acre Bourke property, rock for rock and tree for tree. Hudson and Gibson left the project and by the time production was finally shut down, The Drover’s Wife was 16 million dollars over budget. The only footage filmed was six hours of Geoffrey Rush squirming on a studio floor, wearing a green skin-tight bodysuit. The failure of Burbage’s film led to the collapse of Billy Boils Studios and the abandonment of a planned biopic about the Australian writer Sydney Steele, to be directed by George Miller.

Burbage spent the next three years attempting to raise money to complete The Drover’s Wife, but no studio would have anything to do with him. Having lost most of his savings in a lawsuit brought by his producers, Burbage was forced to return to acting. In 2005 he starred in a revival of 69 Huntingtower Road as Keith Jenkins, who, it turned out, had not drowned. Burbage left the soap in 2009 when he was offered the chance to star as himself in Barry, an ABC television miniseries based on his life. Liam Hemsworth played Burbage as a teenager, and Joel Edgerton was Burbage in his early twenties. Burbage was to play himself from the age of twenty-five. In order to research his role Burbage bought the house he had lived in when he was in his mid-twenties, contacted many of his co-stars from Destiny Beach to interview them, and even remarried his ex-wife Cassandra. Tragically, the method resulted in a return to the same regimen of drugs and alcohol he had followed during the darkest times of his life. On 14 November 2009, while filming a scene for Barry, Burbage replaced the powdered milk he was supposed to snort with real cocaine, and died from an overdose before paramedics arrived at the scene.