Marcus Steele, widely regarded as Australia’s greatest novelist, short-story writer and poet, was born on 1 July 1864 in Newcastle, New South Wales. His father Peter, a carpenter, and mother, Elsie, were Scottish immigrants. Little is known of Steele’s early life save that it was a difficult one, marked by dire poverty, and his parents’ undemonstrative nature. Steele excelled at reading, writing and mathematics, and at ten years of age he won a scholarship to Sydney Grammar School, where he was in the same class as Banjo Paterson, though the two boys never became friends. The first of Steele’s poems, a scrap of juvenilia called ‘The Man from the Hunter River’ (now sadly lost), dates from this time, as does his short story ‘Wife of the Shepherd’, which won first prize in a writing competition held by the school. Though the story was printed in the school newspaper, no copies are known to have survived.

Steele left the school in 1880 and spent the next several years travelling around rural New South Wales, gathering material for his first collection of poetry, Bush, Beer and Ballads. In 1891 Steele encountered Henry Lawson in a pub in Bourke, and spent the evening regaling him with his poetry. Lawson was entranced, and immediately wrote to J.F. Archibald, editor of the Bulletin, extolling Steele’s talents. When Archibald asked to see Steele’s work, the young man immediately wrote out his collection from memory, and dispatched it to the offices of the journal in Sydney. Sadly the manuscript was lost in transit, but based on Lawson’s description, Archibald wrote a glowing review of Steele’s work in the yellow pages of the Bulletin, praising him as an ‘Australian Wordsworth’. Publication of Bush, Beer and Ballads was announced several times over the next two decades but it never appeared, with everything from wartime paper shortages to Steele’s notorious perfectionism blamed for the endless delays. This has not stopped Bush, Beer and Ballads from being voted the nation’s favourite poetry collection in every poll held since 1972.

Having conquered the world of poetry, Steele turned his hand to writing prose. His first short-story collection, Charlie Cobb’s Cobbers, was written from 1902 to 1907, with the title story added in 1910. During this time, Steele survived on handouts from a number of wealthy patrons, including, it was rumoured, the governor-general and the prime minister, both of whom professed themselves admirers of Steele’s work. Finally, in December 1910, the collection was completed, and submitted to publishers Allenby & Godwin. The editor, Lloyd Allenby, accepted the book immediately, and invited Steele to his home for a celebratory dinner. According to legend, the two men drank long into the night, reading passages of Charlie Cobb’s Cobbers to each other, and roaring with laughter. Unfortunately, when they awoke the next morning, they found that a maid had thrown the only copy of Steele’s manuscript on the fire. Allenby apologised profusely, honoured Steele’s payment for his book, and wrote him a handsome letter of recommendation to his friend and fellow publisher Richard Pallister of Longmans, London. Steele sailed to London in 1913, already celebrated as one of Australia’s finest writers. Neither Henry Lawson nor Banjo Paterson, whom Steele claimed had stolen ideas from him, were present in the delegation of writers from the Bulletin who farewelled Steele at the docks.

Little is known of Steele’s activities during the First World War. It appears he began work on his first and only novel, English Eucalyptus, in 1914, and finished the book in late 1917 as, shortly afterwards, it was accepted by Longmans. Unfortunately, all two thousand copies of the book were destroyed in a fire caused by a zeppelin raid in March 1918. Steele’s work had by then come to the attention of James Joyce, who had read an early version of English Eucalyptus (now lost) and described it as a ‘masterpiece’. In 1920 Joyce invited Steele to Paris, where Steele gave advice to the Irish writer on the composition of Ulysses, then being published in instalments in the Little Review. Joyce later said that Steele had helped him reduce the length of the book by half, and many critics have since observed it was unfortunate that Steele did not live to offer his advice to Joyce on Finnegans Wake.

Steele was to remain in Paris until his premature and tragic death in 1924. When warned against drinking the Parisian tap water, he replied that he had drunk far worse in Newcastle. He died of cholera six weeks later, and was buried in an unmarked grave, at his own request, in a small cemetery in the northern suburbs of Paris. His life and works are commemorated in the Marcus Steele Museum in Canberra, where tens of thousands of visitors each year wait patiently in line to be admitted to the secure darkened room containing the scrap of paper on which is written his only surviving composition. 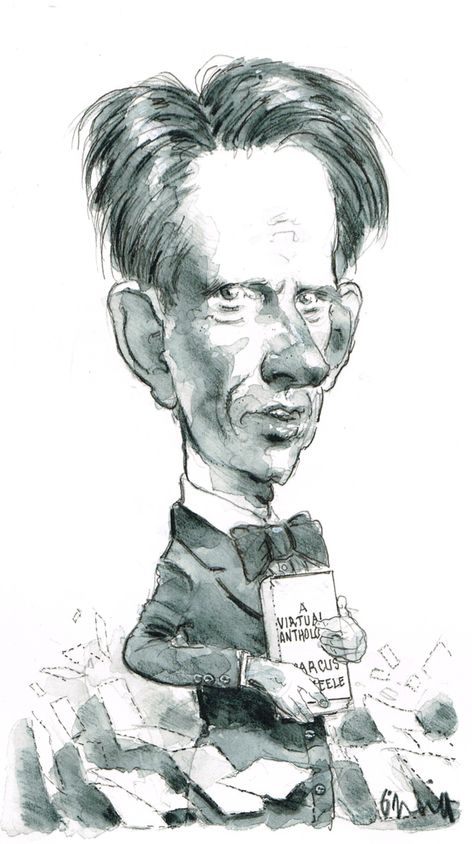