In 1886, at the suggestion of Brahms, the 22-year-old Richard Strauss travelled through Italy. He had recently been appointed conductor of the Meiningen Court Orchestra on the recommendation of that great Wagnerian, Hans von Bülow, but he had yet to make much of an impression on the world with his own music. This was about to change.

Abandoning the conservative style of his juvenilia, Strauss embarked on a series of symphonic tone poems that would include Don Juan, Also sprach Zarathustra and Ein Heldenleben. In less than a decade, he would be one of Europe’s most famous composers.

The first of these tone poems, inspired by his grand tour, was Aus Italien—‘From Italy’—and he completed it a matter of weeks after his return to Germany. Its finale, ‘Neapolitan Folk Life’, was enlivened by the appearance of ‘Funiculì, Funiculà’, a traditional song the young composer had heard all round the Bay of Naples. Aus Italien had its premiere in Munich in March 1887, conducted by the composer, and while not a great success—the folk-song finale was booed—it set him on the path to considerable fame.

But, ‘Funiculì, Funiculà’ was not a folk song at all. It wasn’t even old, having been written a mere six years before Strauss encountered it. Few songs of the day can have entered the public’s consciousness quite so swiftly. Within a year of its publication, ‘Funiculì, Funiculà’ had sold a million copies. No wonder the young Strauss heard it everywhere.

‘Funiculì, Funiculà’ is in the tradition of the Neapolitan song. ‘Santa Lucia’ is the best-known example of one that is traditional, but in the nineteenth century these songs enjoyed such popularity that the Piedigrotta Festival was established in 1830 with an annual competition to encourage new songs in the style. It ran until the middle of the twentieth century. This period—particularly the last two decades of the nineteenth century and the first two of the twentieth—was the heyday of the Neapolitan song, the age of Enrico Caruso, who took the songs to America and made the style internationally famous.

Perhaps the most famous composed Neapolitan song is ‘O sole mio’, written in 1898 by Eduardo di Capua and Giovanni Capurro, and sung not only by Caruso but also Elvis Presley (as ‘It’s Now or Never’). Another well-known example is ‘Torna a Surriento’ (‘Come Back to Sorrento’) by Ernesto and Giambattista de Curtis. 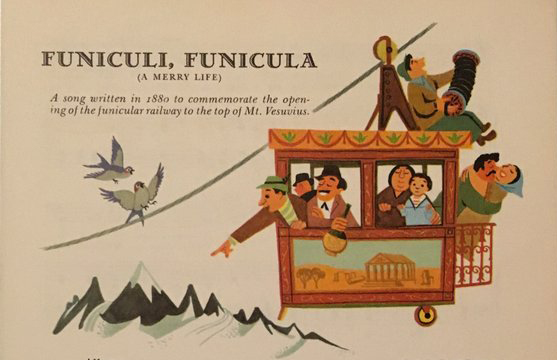 ‘Funiculì, Funiculà’ was intended as something of a novelty song, a humorous celebration of the first funicular railway on Mount Vesuvius. It was the work of the composer and singing teacher Luigi Denza and the journalist Giuseppe ‘Peppino’ Turco, whose lyrics are sung from the point of view of a man who heads up the volcano on the funicular in order to escape the taunts of his girlfriend, one Nanniné, but as the car turns around at the summit, so do his feelings. On the way down, he realises he wants to marry her.

The song’s chorus—‘Jamme, jamme ’ncoppa, jamme jà!’ (‘Let’s go, let’s go, let’s to the top!’)—turns the word ‘funicular’ (‘funicolare’ in Italian) into the joyous nonsense refrain ‘Funiculì, funiculà, funiculì, funiculàààààààà’, and it does so (until the final attenuated syllable) on a single repeated note. The absence of melodic inflection here focuses our attention on the sound of the words, which emphasise the song’s rhythm. ‘Funiculì, Funiculà’ is a tarantella, a dance, not only native to the south of Italy, but also associated with courtship.

There’s nothing particularly bold about the tune (apart from those repeated notes) or the harmony. ‘Funiculì, Funiculà’ is a well-made song that punches out its diatonicism like most good popular music, and it is undeniably catchy. In the year of its composition it won first prize in the Piedigrotta competition, was published by Ricordi, and sold by the truck load. It has remained a popular hit, taken up nearer our own time by the Three Tenors and Andrea Bocelli (Caruso had begun the association with tenors). It was also not long before it became something of a cliché. When Noël Coward wrote ‘A Bar on the Piccola Marina’, he had the lately widowed and now bibulous Mrs Wentworth-Brewster knocking back the gin on the Isle of Capri while loudly declaiming ‘Funiculì, funiculà, funiculì, funick yourself!’

Luigi Denza moved to London not long after the success of his song and by the end of the nineteenth century was professor of voice at the Royal Academy of Music. By now, Strauss was a famous composer and it was only a matter of time before Denza heard Aus Italien and noticed the prominence, in the finale, of ‘Funiculì, Funiculà’. When he did, he successfully sued Strauss, who was thereafter obliged to pay Denza a share of his royalty from each performance.

Strauss, who readily acknowledged his error, was in no position to complain. More than any other composer before him, he was an assiduous businessman, and in that capacity had been one of the leading figures behind the reform of German copyright law.

Andrew Ford is a composer, writer and presenter of The Music Show on Radio National.

Anni Heino is a Finnish-born journalist and musicologist. She works as an editor at the Australian Music Centre in Sydney.