The car has been a staple image of rock music from the beginning. In songs by Chuck Berry and the Beach Boys, the car represented freedom from work (or school) and privacy from parental eyes. In the songs of Bruce Springsteen it is a means of escape, even if there is no obvious destination.

The car song is a male construct. There are practically no similar songs by women, and those that present a woman’s point of view tend to be by men. In the Pointer Sisters’ ‘Fire’, for example, the woman is ‘riding in your car’ while acting out a male fantasy (‘You’re pulling me close / I just say no / I say I don’t like it / But you know I’m a liar’). The song is by Springsteen and when he sings it, and the point of view shifts (‘You just say no / … / But I know you’re a liar’), the effect is unsettling.

Tracy Chapman’s ‘Fast Car’ is that rarity, a car song by a woman. The first single from her eponymous first album, it romanticises the passenger seat while staring down reality. In 1988, when Tracy Chapman first appeared and ‘Fast Car’ climbed the charts, it was part of the mythology surrounding the singer that she was from a poor background and had been discovered busking. Photos showed her, eyes downcast, in a big overcoat with a turned-up collar.

It wasn’t only media hype, there was some truth to it. Chapman was indeed from a working-class home in Cleveland, Ohio, brought up by her mother, before being offered a scholarship to the Wooster School in Massachusetts. She had also been discovered, though singing in a club, not busking. Mind you, she had busked, too, albeit in Harvard Yard while studying at Boston’s neighbouring Tufts University.

What made the mythology easy to believe was the lyrics of the song and the voice, a low-pitched mumble. Chapman never had a high voice, but on ‘Fast Car’ it was lower than on the album’s other tracks, restricting itself, for the most part, to the octave below middle C. There was an emotional catch and a hint of vulnerability. It was a voice that matched the downcast eyes and turned-up collar.

The lyrics relate a story of disappointment. If ‘Fast Car’ resembles a Springsteen song, it is not ‘Born to Run’ or ‘Thunder Road’ so much as ‘The River’ (with the car substituting for the river in question). But Chapman’s structure is more complex than Springsteen’s, for while ‘The River’, a song in the past tense, wears its regret on its sleeve, Chapman’s present-tense song begins hopefully. ‘You’ve got a fast car’, she sings, ‘Maybe together we can get somewhere’; and ‘I got a plan to get us out of here’. 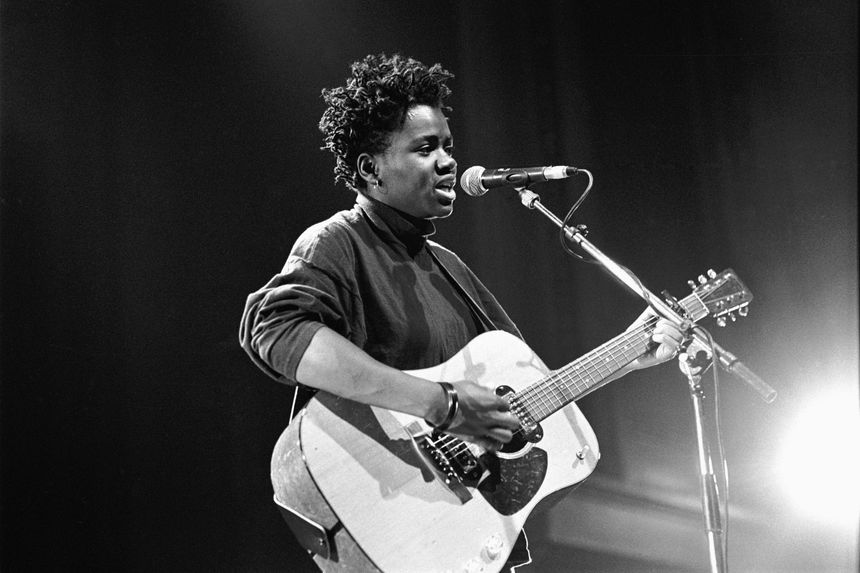 ‘Here’, it turns out, is where she looks after a father, who ‘lives with the bottle, that’s the way it is’ and has been abandoned by his wife. Perhaps the ‘fast car’ will be the daughter’s means of escape. ‘Any place is better.’

But the story moves on, still in the present tense, and the optimism fades: ‘You still ain’t got a job …’; ‘You stay out drinking late at the bar …’ Things have not worked out. They have children, but he’s rarely home to see them. Perhaps the best solution for everyone is that he ‘take [his] fast car and keep on driving’.

Interspersed with the present-tense narrative of the verses is a past-tense memory of riding in the fast car itself with ‘your arm … wrapped round my shoulder’. Is it a chorus or a middle eight, a bridge?

Musically, ‘Fast Car’ has three layers. There’s Chapman’s voice; a wistful guitar line that echoes it, playing a variation of the first two lines of the vocal melody; and the harmony—just four chords: D major, A major, F sharp minor and E major, or I-V-iii-II. Each time the harmony rises hopefully, then goes back to the beginning; the chords go round and round, a bar of I-V, a bar of ii-II, line after line, verse after verse. Like the singer at the end of the song, the chords ‘ain’t going nowhere’, and even when the words suggest the possibility of  escape, the harmony makes it clear the singer is trapped.

After three and a half verses—two minutes into the song—comes that chorus/middle eight. As the singer remembers ‘driving in your car’, the drums kick in and we feel a momentary sense of exhilaration. For the first four bars, the melodic line seems to mimic the Doppler effect of traffic speeding by, a string of As with the occasional flick of a G sharp.

Then, at ‘I had a feeling that I belonged / I had a feeling I could be someone’ we hear the first melisma of the song. It is only three notes long (‘I–yee–hi’), but it involves the melody stepping out of the constraining octave for the first time, and because of the song’s previous monotony, this is a big moment. Yet the step is just a whole tone, and there ends the melodic adventure. The flourish returns each time this line is sung, but it is always the same and soon the thrill is gone.

The exhilaration that comes with the arrival of the chorus/middle eight is enhanced by a change to the harmony. Instead of chord I moving to V in the first bar, the music stays on chord I. Like the little melisma and the whole-tone step out of the octave, it is a small matter, but after two minutes of I–V, followed by iii–II, it’s a relief. But then you realise the I–V–iii–II pattern hasn’t gone away at all, only slowed down. The pattern is exactly the same, but now at half speed. The words describe ‘Speed so fast I felt like I was drunk’, while the slower harmonic rhythm suggests the memory may be just a dream.

As the dream fades (‘be someone, be someone, be someone’), we’re wide awake and no better off. If it was a bridge rather than a chorus, then it was a bridge to nowhere, a bridge back to the beginning. The original opening line, the original chord pattern. The ‘fast car’ is now just for ‘cruising to entertain ourselves’. He remains unemployed, while she works ‘in the market as a checkout girl’. Still, hope hasn’t been extinguished. Things ‘will get better’, he’ll ‘find work’, she’ll ‘get promoted’, they’ll move to the suburbs.

The chorus/middle eight/memory/dream comes again and it’s the same as before. It’s always the same. That’s the point. This time when it fades and we’re back at the start once more (‘You’ve got a fast car’), it’s evident the relationship hasn’t worked. The song ends with another half verse. ‘You gotta make a decision,’ she tells him. ‘Leave tonight or live and die this way.’ And then the chords just keep going, round and round until they stop.

Is it a depressing song? Yes and no. The singer claims she might have ‘been someone, been someone’, but in truth she is someone. She has looked after her abandoned, drunken father, she has maintained a steady job while bringing up children, and by the end of the song she is confident enough to send away her dream of escape. Meanwhile the low mumble that began the song has transformed in our minds into a voice that has a quiet strength, that is dignified. If not triumphant, there is nevertheless something heroic about it.

There have been quite a few cover versions of this song in the decades since its release, adding folksy violins or techno beats. But embellishing this song only reduces its impact. Its strength is its simplicity, its repetitious logic unforgiving and complete. •

Andrew Ford is a composer, writer and presenter of The Music Show on Radio National.

Anni Heino is a Finnish-born journalist and musicologist. She works as editor at the Australian Music Centre in Sydney.