A recent Essential Research poll found that voters overwhelmingly judged the Liberal Party to be better managers of the economy than the Labor Party, with a margin of 42 per cent to 21 per cent. No surprise there … such results are of a piece with years of polling that trace the entrenched community sense that Liberals make the best economic stewards. Which is not to say that these perceptions are ever judged against the facts.

Constructing that sort of judgement from the evidence is timely. In May 2016 both sides of politics will have been in office for the same amount of time since Gough Whitlam won the December 1972 election: 43 years and six months ago, during which Labor and the Coalition will each have been in office for 21 years and nine months. These are long time frames, and sufficient to weigh this economic contest. Given the vast array of economic data around, it should be relatively straightforward to measure which side of politics is the ‘better economic manager’. In this essay, the economic indicators used to judge economic management are real GDP growth, including a comparison against the United States economy, and employment growth.

More on methodology: the term of each government is taken to begin with the month or quarter immediately after it has been sworn in. This is the simplest and fairest way to assess the economic data and compare economic outcomes. By way of example, the Hawke–Keating government (11 March 1983 to 11 March 1996) is measured using data starting in the month of April 1983 for employment and the June quarter 1983 for quarterly GDP data, through to the month of March 1996 and the March quarter 1996. For the Howard government (11 March 1996 to 3 December 2007), the data covers April 1996 and the June quarter 1996 through to December 2007 and the December quarter 2007. And so on. For the current Liberal–National Party Coalition government, I have used data up to and including 25 January 2016, which means the data set available and used for its periods in office since 1972 is a few months shorter than for Labor.

Critics of this methodology will rightly note that governments cannot change economic circumstances immediately after assuming office and that some lag is appropriate when measuring the economic record of each government. In other words, it would be prudent to lag the starting point for each government, thereby allowing the policies of the new government to impact on the economy. A contemporary example may be the repeal of the mining and carbon taxes, which did not occur until more than a year after the Coalition government took office. While it would be desirable to lag the impact of each change in government, it is impossible accurately to assess how long the lag should be and, given the nature of policy changes, it would likely be different each time the government changed. It is also possible that the business sector, markets and consumers change their economic behaviour prior to a change of government in anticipation of that change. Hence the decision to use the methodology outlined above.

One way to judge economic management credentials is to compare the average rate of real GDP growth under each side of politics. If a particular political party (or coalition) is a better economic manager, it would show up with the economy recording a faster rate of economic growth, on average, when they were in power versus a lower rate of growth when the other side was in power. Table 1 shows the average quarterly real GDP growth rate under each of the last six governments. 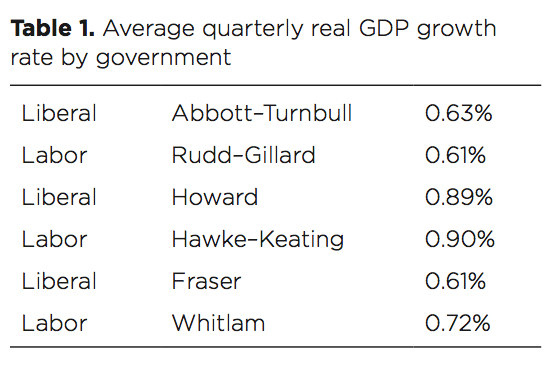 The Hawke–Keating government presided over the strongest rate of GDP growth, closely followed by Howard with a gap then to Whitlam and a further, larger, gap back to a cluster of Abbott–Turnbull, Rudd–Gillard and Fraser.

The overall weighted average quarterly GDP growth rates since 1972 are 0.80 per cent for the Labor Party and 0.77 per cent for the Liberal Party. This shows that the economy grows faster, on average, under Labor than the Coalition by 0.03 per cent per quarter, which is a touch over 0.1 per cent per annum. This may not appear to be a huge difference, but in today’s dollar terms it is approximately $1.7 billion per annum of extra GDP in each of the 22 years Labor has been in government. The cumulative effect of this difference on GDP is just under $40 billion. In per capita GDP terms, this is an additional $1600 for each of us.

As a control on this measure of economic success, benchmarking Australian GDP growth against US real GDP growth should at least partly overcome any potential bias that one side or the other was impacted more heavily by the business cycle in the United States, the world’s largest economy. 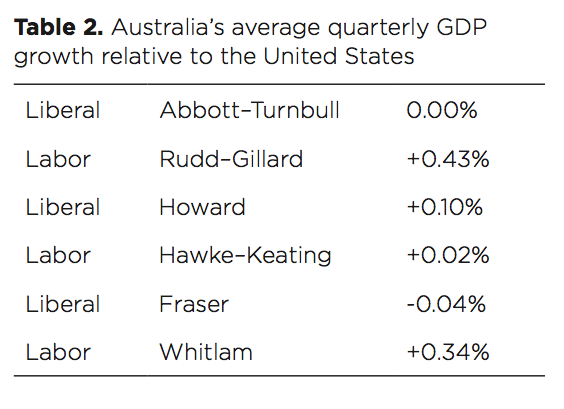 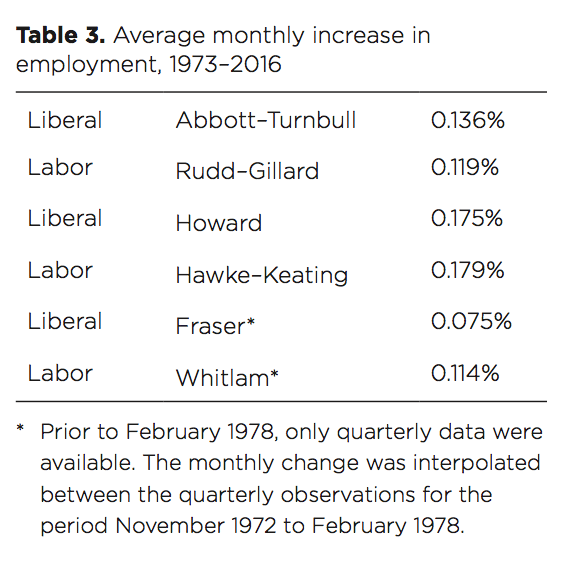 Given the size of the labour force today (at December 2015, there were 11,902,000 people employed), the difference of 0.018 per cent in monthly employment growth is approximately 2140 people extra per month or 25,710 people per year. In other words, given the size of today’s labour market, when the Labor Party is in government, annual employment creation is 25,710 higher than when the Coalition is in power. Over the 22 years of Labor governments since 1972, 565,000 more people will be in work today than had job creation been at the pace set by the Coalition parties in government.

Contrary to perception, the data for GDP and employment growth over the past 43 years suggest a stronger economy with a faster pace of job creation when Labor is in power than when the Coalition is in power. All of which makes you wonder why the electorate seems so convinced the Coalition parties are the better economic managers.

Labor has been ineffectual over many years in tackling the issue of economic management. Kim Beazley, as Labor leader following the election of the Howard government, was reluctant to embrace the Hawke–Keating legacy, which saw a raft of reforms put in place that served the Australian economy well. The good economic times during the Howard government were fantastically strong, but this created an odd situation in terms of the public perception of economic management. Howard, his treasurer Peter Costello, and more recently when Opposition leader, Tony Abbott, convinced the electorate that the level of interest rates, budget surpluses and level of government debt were measures of economic management rather than simply the tools used to manage the rate of economic growth and employment. Low interest rates and budget surpluses were presented as indicators of good economic management. High rates and budget deficits have been portrayed as unambiguously bad.

This has in turn hampered the case for economic reform, with governments reluctant to take on debt to build, for example, essential infrastructure, for fear of being seen to be borrowing too much. But even on these skewed measures of performance, the evidence confirms that the Liberal Party is a significantly higher taxing party than Labor and that for more than 20 years the government has had little direct influence on the level of interest rates, with the Reserve Bank of Australia setting interest rates independently of any government influence.

The true lesson here is probably that public perceptions can be difficult to change, even when they are at odds with very clear reality.