To speak of dispossession is to trace a burial site that is bodies deep. This is a ghost and it knows not how to sleep. You pound the earth to smooth it flat and hope that none will stare too hard where you have hidden these secrets in an ancient land to keep. This string is tangled and unless you unravel it you will turn this way and that and no matter, there it will trap your feet.

To reckon with this country is to reckon with what lies in the land. Swipe at the surface. Make no mistake, these bumps are bones. They are kept covered with denial. This is the shield of a lie. None can tell where it ends or where it even begins.

You arrived by land, you arrived by sea. The land stretches as far as the eye can see and then the continent stretches even more. You have encountered the fable, you have encountered a myth but you arrive laden with the baggage of back home. The principal weight belongs to the ideas you have carried across the globe. These are European notions of what a land ought to be. You do not see the land. You see parcels, divisions, titles in a name. This is ancient land, old enough to dwarf the mind. Do not consider this, do not reckon, cling to the idea you have lugged from the mother to this foreign land. Faced with unfamiliarity, you find solace in ideas. They are the shield and armour, they steady the quiver that threatens to overwhelm the structures of the mind.

You are the ultimate migrant. This is not the term you use for your exploration, your settlement on this vast and extreme plain. This is the term you use for the waves that came later, the new being kicked by the generation before. See now this migration, see now that you came with dangerous ideas that are the plight of migrants everywhere. You leave one place, you arrive in another, you seek quickly to live in the shadow of the homeland. The same life, the same beliefs, the steadying as the mind unhinges confronted with this other world. It is too much of a challenge, it is easier to settle in the familiar than attempt to understand. You build a structure, it will keep this new world at bay. To enact a dispossession, you need the comfort of a lie. There is no-one here, this land belongs to no-one else. There! You are free with your mother ideals. You are free, foreigner. Go ahead, make your claim.

To contend with vastness, you begin a system of names. These are comforting names for you. There are references to home. This land is first New Holland and then it becomes the Southern Land. You fashion another name from Latin and it is then promoted abroad. Is it too late to ask if this land was known by another name? Perhaps it was but the name has faded or perhaps it is convenient to forget if you wish to claim Australia for the motherland. There are the crimes of action and then there are the crimes of omission and forgetfulness. The latter is passive but it is a crime nonetheless.

Everywhere are your references to the empire claiming the land. There may be many tribes but there is but one ruler of this land. Old names, you don’t think they exist but you managed to mark out lines on this blank space. A reference to Wales, two honours to the Queen and for the rest laziness creeps in. This part north, this part west and there is a piece in the south. A little island hangs off the Southern Land. There is so much land, you can be forgiven for the neglect creeping in. You cling to the fringes for they are green, you keep your eyes seaward, you dare not look to the heart. In the dark hours of the night you may concede this land is black but bury your head in the blankets, ignore the knock on the door, ignore their sovereignty, ignore they have a prior claim. 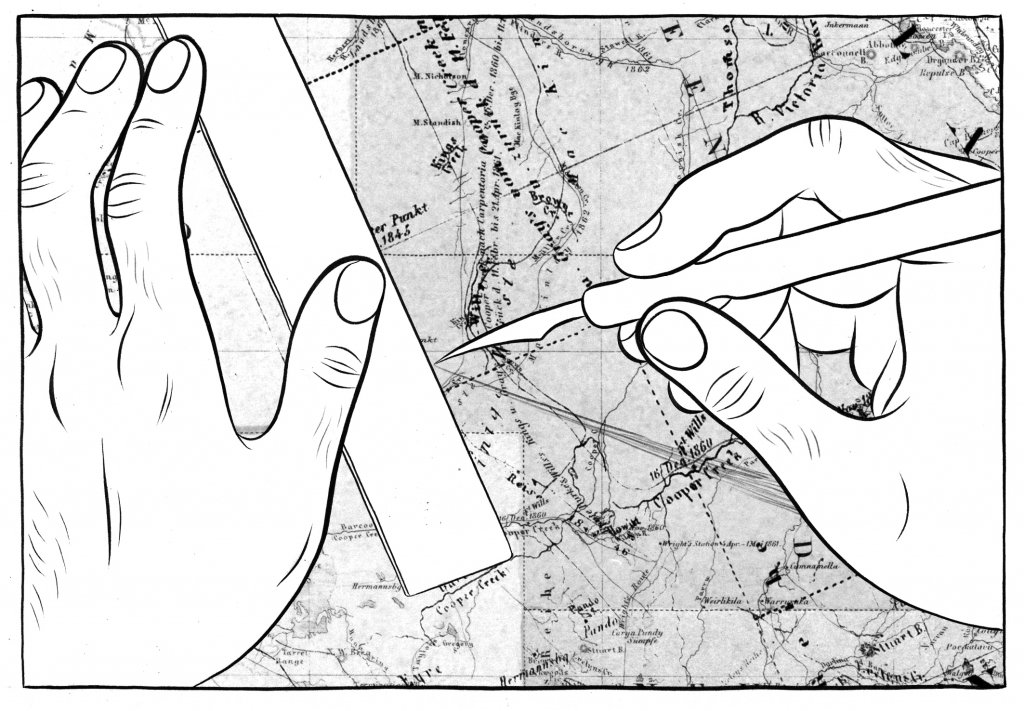 Your arrival comes with supplies to make your living off the land. The seeds, the plants, the animals of the motherland. Whatever lies here is left ignored. That is tucker for them, not for the likes of you. It will be centuries before their knowledge creeps up through the life you have forced on this land. You sow, you hope to reap, but the seasons are upside down. The crop fails, the might of the empire will not protect this far at the tip of its mighty arm. The seasons are reversed, try the crop again. Success! Your Great God has not forsaken you away from home. This crop worked, you will make it work again. It will be spread across, no matter how ill adapted it is to the land. The cattle and sheep are left to graze, their feet too heavy for the brownness of the ground. This is not the green of Europe. This is drier country and you may make a life if you study before inflicting your blindness on the Southern Land.

Do you not see that the inland lakes are dry, that the mountains have been smoothed down by time, that the larger versions could not be sustained and that only the smaller fauna remain? This shrunken kangaroo—your national icon—has hundreds of names but you only recognise a single sound. You were meant to see this variety but you held fast to an idea that does not belong on this land. You hold it tighter now. One hundred years, 200, dear God, let me make it another century. It is only this idea that I have left from my home. I cannot dismantle the structure I have built by hand. It is mine, my boot prints have trodden their ancestral lines. If I surrender my idea, if I abandon this tower of words and names and claims, I see I am no migrant here. I am an alien and this is not my land.

The supremacy of tongue

You have no need for 300 variants on kangaroo. You only need one. This is the emblem of the land. We are unique, have you ever seen something as strange as this creature hopping around? Kangaroo is enough. There is no need for kangaroo in Dharug or Gamilaraay. Do not acknowledge the diversity. It is your hope it will soon be wiped from the land. One language, one people, one ruler, all of them your own. To achieve dispossession, first there is the land, then there is identity and finally there is their tongue. You have reached your end only when their words have been put to sleep in the ground alongside their bones. This periodic bloodletting will ensure they fade, they fade and finally they are gone.

This process is active and it has many rungs. Speak only your language, do not adopt their tongue. Forbid the use of their words and ensure no document is made of them. Remove them from their ancestral land where they can communicate with others who speak this same tongue. Separate, forbid, enforce with the long reach of the law. Make this government policy and once the language is near eradicated, then see the token light and apologise.

I am sorry for history but gloss over the present day. Intermittently, their words are taught in school, a greeting, a ceremonial nod. Formalise no more. Your one language rules supreme. In perfecting the art of colonisation, recognise the language as the final frontier. It is world view, it is relationship, it is identity. Control the language and you control the mind. Lucky you, they were oral anyway. Once hundreds—tiers of language, tiers of dialect—now fewer than a hundred remain in active use. Do not give up, do not despair. Hold fast. This process, centuries old, is almost a fait accompli.

With this arrival, this conquest, one idea reigns supreme. You are a numbers person. You believe in possession through measuring the thing. The land is this many metres, the elevation is this high off the ground. Where a traveller may have seen the land, been curious about what 50 names say about the tree, already your mind was quartering, the stake hammered right in.

Yes, the lake is blue but tell me, what lies underneath? Minerals, metals, for how much and shall we discuss ownership? The rock is a monolith. According to the numbers, it is the largest of its kind. How long will it take to climb it, how many can scale it each day? An empire requires riches, an empire has its price. It did not become an empire through curiosity and the haphazard encounters of the day. The heart of an empire is a dream and its nature is possession and this ideal governs your descendants to this day. It lies in your governance and how you study the land. The rocks are not enough, not the earth pulled back for a peer. Possession—the numbers game—requires brute strength and the willingness to eradicate the speakers too.

If you see resources, if you see riches and plots, why not extend this ideology to people too? They are not humans, their world does not warrant a flicker of your eye. The erasure of words, the erasure of the speaker too. This child shall be removed from that group, they shall be raised our superior way. We wash this over and call it right and the merciful thing to do, justify this how you please. An ideal to be pursued till it reaches from one continental tip to the opposite, burying their words, lives and dreams.

You see now—admit it—that the entire structure is the legacy of an ideal. Your possession is built on their dispossession. This is an old story, a human story, the empire expanding its ground. The old version was the reach for territory, it is our right to dominate. Today we tell ourselves a different version and it is the shard of metal lodged in a national wound. For the protection of a superior race, there is the shadow race that is inferior in your view. This piling up of wealth has its dark foundation on another’s dream. To protect your power and your world view, attack those less privileged than you. The migrant must surrender their language and culture and pledge allegiance repeatedly. Those who believed your insistence on fairness and freedom shall be detained indefinitely. The family that risked the waters will be imprisoned, discredited and none will care when the stories are proven untrue. As for the elders and their descendants, limit their voice, their representation in the public view.

There! The tower is now a fortress and, yes, it suffers attacks from time to time but this is to be expected when your control is complete. The ideal is the kernel hidden in your heart and as long as it is kept secret, there is no need to acknowledge or explain that it is to be your legacy. It is hidden, it is safe but if it is exposed, shake your head, it is a misunderstanding, apologise from here to the sky. My words have been misconstrued, this is never what I meant. To protect your truth, it is best denied. In this way, your ideal of conquest ensures their dispossession of land and dream is complete. •

Yumna Kassab’s first story collection, The House of Youssef (Giramondo), was listed for the Victorian Premier’s Literary Award, the Stella Prize and the UTS Glenda Adams Award for New Writing.