The potter gives me a giant vessel. Pocked and the colour of red-gum trunks in late spring, it’s heavy like a four-year-old child. I take it home on the train in one of those tough reusable supermarket bags, straining at the handles. I cut off branches of hop bush, their seeds like pendants rusted at the tips, and place them in the vessel. Slender leaves reach out like a million small fingers. It takes a dozen jugfuls of water to fill it. I count them.

The next day he sends me a text with a paragraph taken from Joan Didion’s Slouching Towards Bethlehem. We never send messages. When I read it, it’s her voice, remote and impassive, that I hear. A woman’s voice, which has had too much taken from it:

I think we are well advised to keep nodding terms with the people we used to be, whether we find them attractive company or not. Otherwise they turn up unannounced and surprise us, come hammering on the mind’s door at 4am of a bad night and demand to know who deserted them, who betrayed them, who is going to make amends. We forget all too soon the things we thought we could never forget. We forget the loves and the betrayals alike, forget what we whispered and what we screamed, forget who we were.

Next time we meet, the potter and I don’t talk about the meaning of the Didion text. But now the vessel sits on my kitchen bench, filled with jugs of water and native foliage, reminding me of the people we used to be. Weighted down like a tired child, carried to the car after a dinner party. It’s as though it has fused with Didion’s words, a transference of meaning. Text message to clay. I try to remember the things whispered, the things screamed. Never sure if it’s worth it. Memories, fortifying but often bitter. I realise its form, an oversized cow bell made of porcelain, is certainty.

We live in an unhomely time, an epoch of banishments, a moment of misenchantment, of Trouble. We mustn’t stop thinking, and writing, about this.

You could say, to twist historian David Lowenthal’s adage, the past is a foreign epoch. Human action, not geological force, has made it that way. And the memories we have of it, of the whispering and the screaming, of the love and betrayals, are diminishing too. The Anthropocene offers us little hope. Now, they tell us, we must be resolute in our adaptations and mitigations. Face forward, move onwards. Fight to survive. Another epoch awaits, one where the machine reigns.

Only the romantics still worry about the past. Chiding it to keep up. Adrienne Rich, in her essay ‘When We Dead Awaken’, writes about the importance of returning to the writing of the past:

Re-vision—the act of looking back, of seeing with fresh eyes, of entering an old text from a new critical direction—is for women more than a chapter in cultural history: it is an act of survival. Until we can understand the assumptions in which we are drenched we cannot know ourselves.

I wonder what this could mean for thinking about the Anthropocene, about the moment we find ourselves in. What might we learn from looking back, re-visioning, understanding new critical directions as acts of survival dredged from the past? This is no longer about being woman or man. It’s about being human and more-than-human. In her poem ‘On Edges’ from 1968, Rich writes:

taste blood, yours or mine, flowing

from a sudden slash than cut all day

with blunt scissors on dotted lines

We ought to think carefully about this rallying cry, this call to arms, this brisk kick at banality. This responsibility we have, to dare, to not to be patient at times. I’m not really sure what Rich means here, but I like to think she’s reminding us that our blunt, tutored thinking won’t save us anymore.

Sometimes things happen in the days that take me away from the news. There’s problems with the kids at school, or the machinery we rely on to power the house or to fill the tanks stops working, or my heart breaks for a moment. I spend time on these things, days, sometimes weeks. And when I lift my head again, and read the headlines, I’m certain we’ve all gone mad. There is something repulsive about the present.

Unprecedented bushfires rip through New South Wales. World’s thickest mountain glacier succumbs. Drought to become more frequent and severe. ‘Climate strike’ named 2019 word of the year. We eat the equivalent of a credit card of microplastics every week. Fatal cost of economic inequality and the rise of ‘deaths of despair’. Fake Halloween cobwebs found in birds’ nests. These headlines are delivered without irony. 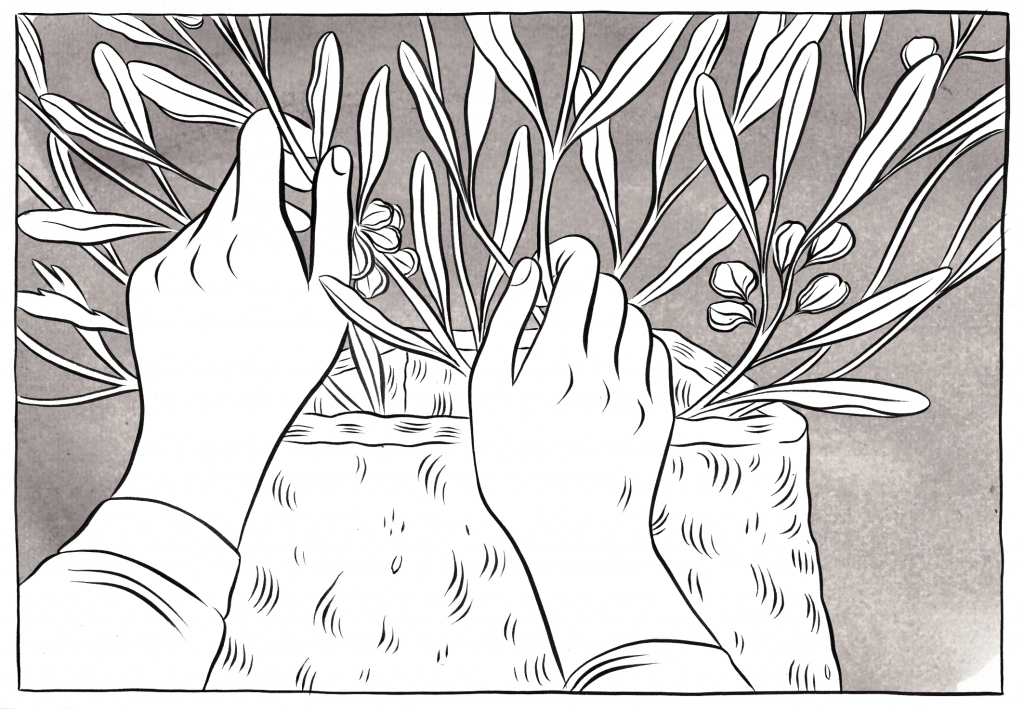 There is a moment in Mary Oliver’s essay ‘Staying Alive’ where she writes about being left on the ice by her father who absentmindedly returns home without her. I imagine the child, ice skates on, circling listlessly, waiting for her pick-up as the afternoon grows heavy.

This is an essay scattered with daring lines that a fulfilled woman can write. A woman, she says, without bitterness who chooses to claim her life. Lines such as: ‘the world’s otherness is an antidote to confusion, that standing within this otherness … can re-dignify the worst-stung heart’. Oliver writes about ‘gathering certainty’, ‘the summoning world’ and remaining ‘steadfast about one or two things’. These are what we need in our life, she urges. Halfway through the essay, she warns, ‘you must not, ever, give anyone else the responsibility for your life’.

The father returns to collect Oliver hours later from a known house she’s taken shelter in. When he arrives, she recalls her younger self thinking, never had I seen so handsome a man; he talked, he laughed, his movements were smooth and easy, his blue eyes were clear. Her safe return, the absolution from his forgetfulness, ‘lay on him, that freedom, like an aura’. When they got in the car, and he left behind that brief respite, that tetherlessness, ‘he sat back in the awful prison of himself, the old veils covered his eyes, and he did not say another word’. Sometimes forgetting and then remembering releases us, if only for a moment.

Something that helps us endure, that keeps us with the Trouble, is the company of writers.

In the collection in which Oliver’s ‘Staying Alive’ is published, there’s another essay where she writes about turtles, her ‘wild body’ and appetite. It’s called ‘Sister Turtle’. Among raptures on Shelley, Wordsworth, Blake and Bashō, she writes about interrupting a snapping turtle busy with the patient work of burying her eggs in the sand. Returning in the evening to uncover the nest, Oliver pockets a dozen eggs, half of what’s there, for scrambling. She describes the large yolks, the tough shells that need to be nicked with a knife not broken on the pan, and the ‘little fertility knot’, the tight bud of the new turtle.

It reminds me of another woman writer I admire, Judith Wright, and specifically a poem published in her last volume, Phantom Dwelling. It is a collection of poetry that was never particularly well received, which reflects a different style and tone to her earlier, more celebrated works.

The title of the volume is a tribute to Bashō and his prose poem written in 1690, ‘The Hut of the Phantom Dwelling’. It’s not clear why Wright borrowed this notion. It might be in reference to the husk of her then ageing body, or a more general reflection on the impermanence of one’s beliefs, of time.

The poem that Oliver’s turtle eggs reminds me of is titled ‘Memory’. Wright writes about her property, ‘drought’s changeable weather’, and the way landscape remembers the presence of her lover who camped there ‘three Decembers back’. The foursquare patch of kangaroo grass where the tent was pegged not yet sprouting back. There’s a sense of hope in this spectral presence, his phantom dwelling. It’s the unhealed place she passes on her way to swim in the river. She writes: ‘Even in mid-summer, the frogs aren’t speaking. / Their swamps are dry. In the eggs a memory lasts.’

Memory is the fertility knot.

We might interpret Didion’s urge to keep ‘nodding terms with the people we used to be’ as being about making amends, for a future, for the tight bud of new. Staying with the Trouble, as Donna Haraway implores, in this relentless moment of small and furious banishments must involve leveraging new critical directions from the past. Recuperative histories.

We ought to keep sifting through the Anthropocene’s loves and betrayals, letting the remembering release us for a moment from headlines of permanent devastation, so that we may focus on the important work we need to do. This work has to involve regaining some sense of certainty.

And even though hope has become almost too easy to write about precisely because it no longer seems credible, warranting hardly a commitment, we must continue. Because to do so, despite the at-times overwhelming repulsiveness of the present, is an act of survival. •

Claire Collie is a landscape sociologist, writing about spatial justice and the Anthropocene. She lives in central Victoria, where she gardens.