Last winter I had an unexpected visitor: the man I called Javo in my first novel, Monkey Grip, turned up at my front door. He looked fabulous, like a crazy Red Indian, healthy as can be, the father of two kids, and talking like a Buddhist. We stood in my back yard looking at the vegetables and he said, ‘Listen, Hels. I used to think Monkey Grip was the worst thing that ever happened to me. But now I love it. My only criticism of it is that you should have left in all our real names.’ 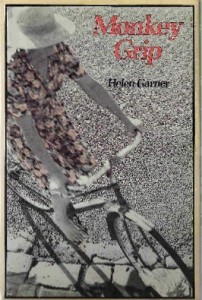 Shouldn’t a real writer be writing about something other than herself and her immediate circle? I’ve been haunted by this question since 1977 when a reviewer of Monkey Grip asked irritably what the fuss was about: as far as he could see, all I’d done was publish my diaries. I went round for years after that in a lather of defensiveness: ‘It’s a novel, thank you very much’. But I’m too old to bother with that crap any more. I might as well come clean. I did publish my diary. That’s exactly what I did. I left out what I thought were the boring bits, wrote bridging passages, and changed all the names. It was the best fun I ever had, down there in the domed reading room of the State Library of Victoria in 1976, working with a pencil and an exercise book on one of those squeaking silky oak swivel chairs. I’ll never be that innocent again.

Why the sneer in ‘All she’s done is publish her diaries’? It’s as if this were cheating. As if it were lazy. As if there were no work involved in keeping a diary in the first place: no thinking, no discipline, no creative energy, no focusing or directing of creative energy; no intelligent or artful ordering of material; no choosing of material, for God’s sake; no shaping of narrative; no ear for the music of human speech; no portrayal of the physical world; no free movement back and forth in time; no leaping between inner and outer; no examination of motive; no imaginative use of language.

It’s as if a diary wrote itself, as if it poured out in a sludgy, involuntary, self-indulgent stream—and also, even more annoyingly, as if the writer of a diary were so entirely narcissistic, and in some absurd and untenable fashion believed herself to be so entirely unique, so hermetically enclosed in a bubble of self, that a rigorous account of her own experience could have no possible relevance to, or usefulness for, or offer any pleasure to, any other living person on the planet.

What is the ‘I’ in a diary? There can be no writing without the creation of a persona. In order to write intimately—in order to write at all—one has to invent an ‘I’. Only a very naive reader would suppose that the ‘I’ in, for example, the essays and journalism collected in my book The Feel of Steel is exactly, precisely and totally identical with the Helen Garner you might see before you, in her purple stockings and sensible shoes.

The word ‘invent’ here is probably not the right one. It seems to imply something rational, purposeful, clear-headed, conscious. What about ‘choose’, then? How about this: ‘I choose, in the act of writing, aspects of myself that will suit the tale that is wanting me to tell it’?

No. That sounds as if one were confronted with a clear array of possibilities, leaning in a row against a wall all oiled and primed, like rifles.

‘Choose’, like ‘invent’, is in this context as hubristic as the grandiose political fantasy that one chooses one’s sexuality. There’s something organic in the development, the crystallisation of a persona. I don’t understand this process—how I ‘do’ it, or how it’s done to me, or in me, by the demands of my story.

There must be a connection here with the experience that most writers would recognise—that of having to learn to write again for each new book. Between books one passes—or I do, at least—through a phase of having no accumulated competence, of being once again a complete beginner, helpless, frustrated and dumb. The term ‘writer’s block’ hardly touches the sides. it’s a painful state, and it can continue for years. I’ve been stuck in it since December 1999. Many false dawns have announced themselves in the meantime. Despair is not too strong a word.

But it occurs to me that what I’m doing in this state, perhaps, is waiting for the new persona to crystallise—the one that suits the story, the material, the particular area of darkness i want to go stumbling and fumbling into. I need to find a new ‘I’ that feels right. I can’t rush this process. I can’t force it. It’s organic, instinctive. if I launch out by force with the wrong persona, I start after about three pages to feel phoney. I get lost. And I waste the freshness of the material.

I’m always surprised when people I know express appalled amazement to me about what they see as my ‘self-exposure’. One of my sisters, a nurse, told me that when she read my story ‘A Spy in the House of Excrement’, about the Thai health spa where one fasted and took enemas twice a day, she wanted to ‘pull the screen around me’. But I don’t feel exposed—because in this mysterious way I’m trying to describe, the ‘I’ in the story is never completely me.

I’m aware that the persona I create—or that crystallises between me and my story—may not strike the reader quite as I imagine or hope it will. In a piece called ‘Regions of Thick-Ribbed Ice’, about a trip I took to Antarctica, the ‘I’ who tells the story is a bruised, aching, unsociable, crabby, purse-lipped, middle-aged, pedantic, recently deceived wife on whom, against all her efforts to remain unmoved, the glory of her surroundings breaks in to bring a sort of redemption.

The piece is republished in The Feel of Steel. The reviewer of that book in the Melbourne Age (29 September 2001) sees the narrator of this piece as a woman who is ‘vain, contemptuous, snobbish, gratingly school-marmish’. (I smile as I report this, but as Bob Dylan sings on his latest album, Love and Theft: ‘I’m not quite as cool or forgiving as I sound.’) Be that as it may, such a critique, however galling, calls attention in its clunky way to a deal I have always one-sidedly struck, ever since I started writing helplessly about the intimate—and when I say ‘helplessly’, I’m thinking of a perceptive remark made by the painter Georges Braque: ‘One’s style is one’s inability to do otherwise.’

The deal is this: if I’m rough on myself, it frees me to be rough on others as well. I stress the unappealing, mean, aggressive, unglamorous aspects of myself as a way of lessening my anxiety about portraying other people as they strike me.

I have learnt, to my cost, that this will not always stand up in court. The intimate involves other people. But where do I end and other people begin? I once went on holiday to Vanuatu. There I saw a row of tall trees across the tops of which a creeper had grown so hungrily and aggressively that it had formed a thick, strangling mat: the trees were no longer individuals, but had become part of a common mass. I found this spectacle strangely repellent. It filled me with horror. But the older I get, and paradoxically the more hermit-like I become in the wake of my spectacular failures to be a wife, the more I am obliged by experience to recognise the interdependence of people.

How inextricably we are intertwined! We form each other. We form ourselves in response to each other. It’s impossible to write intimately about your own life without revealing something of the people who are close to you. This has always been an ethical problem for me, and it always will be. Scour and scourge my motives as I may, consciousness always lags behind action—sometimes by years. Self-awareness is studded with blind spots. Writing, it seems, like the bringing up of children, can’t be done without causing damage.

But I hope that if I can write well enough, rigorously and imaginatively enough, readers will be carried through the superficial levels of perviness and urged into the depths of themselves. I hope that we can meet and know each other there, further down, where each of us connects with every other person who has ever loved or been loved, hurt and been wounded. Because at my age, pushing sixty, I know for sure that there is nothing in my way of experiencing the world, in all its pleasure and ordinariness and suffering, nothing about me as a writer or as a person, that marks me off as forever separate and unique, or disconnects me from the rest. And like everyone else, to twist a little what Yeats wrote in his poem ‘The Circus Animals’ Desertion’: ‘I must lie down where all the stories start/in the foul rag and bone shop of the heart.’

In response to this piece Mandy Ord has created an illustration titled ‘Naked’.