Hiraeth (Welsh), ‘an acute longing for a home place or time to which you cannot return and without which you are incomplete’

On the top of Mt Cooper in the Melbourne suburb of Bundoora stands an ornate red-brick mansion topped with gargoyles. The Bundoora Homestead was built on the traditional lands of the Wurundjeri-willam clan in 1899. The then owner of the land, a wealthy horse breeder named J.M.V. Smith, organised a public architectural competition to find the winning design.

The Queen Anne Federation–style building became the Smith family home for the next two decades. In 1924 it was sold to the federal government and converted into a repatriation mental hospital for Australian soldiers. After the Second World War the psychiatrist Dr John Cade was put in charge of the Bundoora Repatriation Mental Hospital. In 1948 Cade made history by discovering lithium carbonate, a revolutionary treatment for bipolar disorder, while conducting experiments in one of the hospital’s disused kitchens.

Cade was imprisoned by the Japanese in Changi during the Second World War. One of the patients at the mental hospital, Henry ‘Lofty’ Cannon, had also been a Japanese POW. Cannon was a medical orderly and he and Dr Cade had worked together in Changi nursing their fellow prisoners.

After the war Cannon was allotted land for a soldier settlement farm but his mental and physical health deteriorated to the point where he was admitted to the hospital in Bundoora. He never recovered from the trauma of his war experiences and spent most of the remainder of his life as a patient in the Bundoora Repatriation Mental Hospital. These are my reflections on learning his story:

to the seeping ulcers where the bones are peeping through,

the bones aching from the fever,

the head aching from the blows you took

when you tried to stop the Japs burying a skeleton

who was not quite dead,

a skeleton whose hands still shook,

though his blank eyes stared star-wards?

Did your eyes turn away from the fish

swimming in the wood panels on the staircase,

swimming quicksilver through your dreams,

your hands reaching out to catch them,

stuff them in your mouth, swallow them whole,

fish and rice, that’d be nice,

make a change from the beetles you caught

and buried in your handful of wet grains—

on a good day. 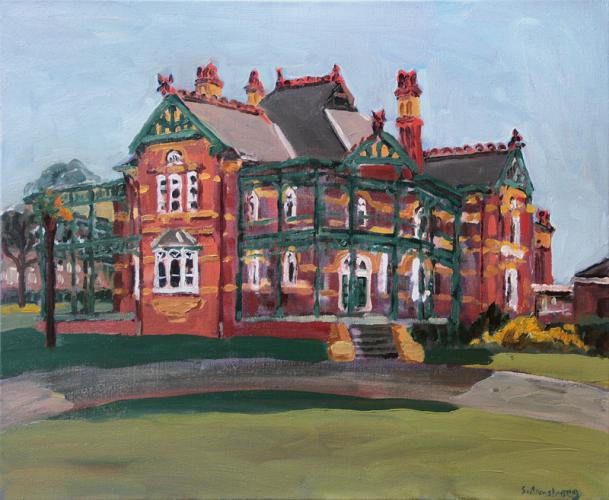 Did the doc stuff a rag in your mouth

when he sent those electrical currents through your temples,

doors to the mind, the mind is a shrine, a shrine is a temple,

the Japs had temples on the railway,

built to ease the souls of soldiers who died,

not the men whose hands you held in the hut they called Ward 5,

the mummies wrapped in bloodied bandages,

who you sometimes saw at the bottom of the wooden staircase,

when the war ends and you all Come Marching Home again, hurrah, hurrah.

Did you stare at the bird trapped in the stained glass at the top of the staircase,

the diving swallow who never reaches the nest,

never making it home again to the girl you married

a week before they sent you off to war,

the girl who waited,

who took you back although you were a ‘sad sack’,

that’s what you wrote on the photo they took of you in the ‘rehabilitation camp’,

to make fit, to live, to dwell,

but you couldn’t fit, not after Changi,

there was no safe dwelling, no home-place,

only the homestead now,

for ever and ever, amen.

Did they nail the wire mesh over the balcony for you

in case the swallow took a dive over the railing

on a night when the dreams were more real than life,

the same dreams over and over,

the same Jap with the same stick of cane beating down on your back,

hanging over the edge of the stretcher in Ward 5,

waiting for that last ciggy,

mate, do us a favour, just one more smoko, hand it over, ya miserable coot,

but in your dreams there are no more smokes,

just the twig-fingers stilling and stiffening on the stretcher,

over and over again,

and is that what you wanted, Lofty,

a dive, a plummet, the soft green grass under the balcony,

the stilling, the stiffening, the silence?

Did you think that words would cure you—

‘it’s unburden or burst’, you said—

did you think that a poem was a ticket home,

that if you wrote it all down and called it ‘So, you want out’,

even better, if you started a magazine at the hospital, handed it round,

someone would read those words—‘So, you want out’—

someone would come and get you out,

but out to where, Lofty,

back to the dry red dust under the dying orange trees,

back to the free farmland they gave you after the war,

and when you came home you were free,

but there was a cost and no way to pay,

burnt into the wood ‘in the Japonaise manner’,

way back when nobody knew what the Japs would do

if they got their hands on you.

Did Dr Cade try to get you out,

the alchemist of Bundoora, the lithium magician

messing about in Ward E,

hey, E is the fifth letter of the alphabet, making it Ward 5,

no, not the ward with the mummies on the stretchers,

but maybe Dr Cade was there too, watching those Japs—

funny word, suffering—to put up with something, or to experience distress,

but in the camp there was no choice,

you had to suffer the suffering,

and what a marvellous marching song it would make—

bronchitis, rheumatics and then dermatitis;

After the war there was still more:

migraine, malaria, and for variety

Did you lie in your dormitory bed staring

at the rows of climbing roses in winding poses

and did they remind you of the barbed-wire fences around the prison camp,

did you dream of squeezing past those thorns

and escaping into the jungle to find some fungus to feast on,

but you weren’t a lunatic, Lofty,

the lunatics went to the asylum in Kew,

but you were a returned serviceman, the nation was grateful,

it was just your nerves,

so we gave you a bed in a dormitory in a house on the top of a hill,

and children’s choirs who came to sing for you on a Sunday afternoon,

with their hair brushed neatly, their shoes all shiny,

their eyes popping at the sight of you,

and the children’s songs floated up the wooden staircase,

past the frozen swallow,

through the balcony doors

and out, out, out

into the wasted blue sky. •

In 1997 the homestead was gifted to the City of Darebin. After being restored it was opened to the public as the Bundoora Homestead Art Gallery, operating today as a historic house, café and gallery. ‘Hiraeth’ was commissioned by Writing This Place 2017, Creative Culture and Events, City of Darebin.

Thanks to Cassie May, Rachel Buchanan, Elizabeth Welch, Ella Hinkley and the staff of the Bundoora Homestead Art Gallery for their invaluable assistance with this project.