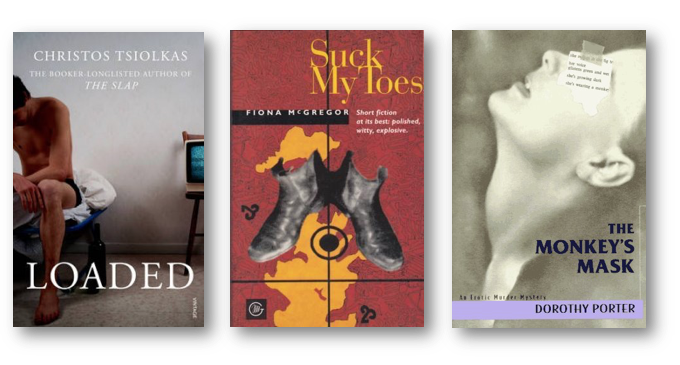 Literature is a reflection of the culture that spawns it. As a queer teenager growing up in Sydney’s outer western suburbs, my access to literature was limited to the books we had at home—airport novels—and the small collection at my high school library, mostly classics. So far as I knew, old white men wrote books; Ruth Park, Ursula Le Guin, Virginia Andrews and Danielle Steele were the exceptions.

When I held up the mirror of literature, I did not see myself in it. The library had no YA section so I occasionally shoplifted Sweet Valley High books from Target. I did not know of any LGBTI literature and there was no internet to search for other voices. As a bookish teenager trying to figure out my place in the world, I could only assume that I did not exist; my experience was invisible, I was a vampire.

I headed beyond the boundaries of home and school, caught the train from Blacktown into the city and found my tribe. I carved out my place in the margins; that is where you go when you do not conform to the dominant culture. You are supposed to be grateful for being allowed to exist on the fringe.

The recent marriage equality vote brought all of my teenage doubts about worth and belonging flooding back. The divisive public debate was not really about marriage equality at all; it was a judgement about the value of the lives of queers and our families. Should we be allowed to inch in from the margins?

It got me thinking about the queer Australian literature I discovered in the 1990s. The sheer joy of these books that told me that I was visible, that my experience was valid, so valid that it was printed on paper, bound and sold in bookshops, collected by libraries. These are three of those books, published in 1994–95, read when I was 21, turning 22.

In my late twenties I moved permanently to Melbourne from my home town of Sydney. These books are portraits of the two cities that will always share my allegiance, along an arterial connection up the Hume and via the heart. These books mix a heady brew in me: of nostalgia, homesickness and of finally recognising my own reflection in the mirror of literature.

Christos Tsialkos’s debut novel, Loaded, is a 150-page voyeur’s view into a day in the life of 19-year-old queer Greek boy Ari. He ticks away like a time bomb, spewing out his nihilistic energy: on the dance floor; by landing punches; and by rough and loveless fucking. Ari is always in motion, propelled along by speed and whisky, fuelled by pot, acid and ecstasy and always with music from his Walkman filling his ears—a soundtrack to buffer the reality of life.

Ari lives in the family home, a constant battleground: ‘Families can detonate. Some families are torn apart forever by one small act, one solitary mistake … Living in my family it was a series of small explosions; consistent, passionate, pathetic. Cruel words, crude threats.’ He whirrs between home and his friends’ share houses, gay clubs, Greek venues, neon-lit 7-Elevens and the homes of strangers, shifting from the grit of the inner city to the yawning stretch of Melbourne’s suburbs and back again, always searching for the next high, for oblivion.

The son of migrants, Ari holds equal disdain for skips, Asians and Arabs as he does for wogs. He is an outsider; he doesn’t belong anywhere, not even in the gay community: ‘Faggot I don’t mind. I like the word. I like queer, I like the Greek word pousti. I hate the word gay. Hate the word homosexual.’ Ari is narcissistic, swaggering with arrogant macho. He ridicules camp and effeminate gays; he desires masculine men and seeks them out and beats and fucks them in dark alleys.

Ari is unemployed; he has no ambition to work or study. He does not aspire to anything, is terminally bored and seethes with self-destruction. He says, ‘I’m angry and I don’t know what I’m angry about.’ Ari cannot bring himself to love himself or anyone else. ‘I love you. I want to say the words, but they are an obscenity I can’t bring myself to mouth. I’ve never said those words. I’m never going to say those words.’

Ari’s world is charged with the divisions that fracture Australian society: ethnicity and racism, gender and sexuality, class and politics. Ari says: ‘Proud of being an Australian?
I laugh. What a concept … what is there to be proud of?’ This is the literature that finally spoke to me of Australian culture, far from the lyrical bush idylls and coastal ballads
of the Australian canon. This was the voice of the working class and the marginalised, the broken and invisible. Tsialkos’s writing is ablaze with a glorious rage. In these pages I heard the rallying call for the deviants to storm the barricades.

Fiona McGregor’s collection of short stories, Suck My Toes, is no longer in print. You can pick up an e-book version published by Scribe and intriguingly renamed Dirt. It was the original title that caught my eye, along with the cover: a pair of Blundstone boots against a red background. It was perfect marketing to me, a 21-year-old recently minted queer.

Twenty-four years later I search my double-stacked book shelves for my copy; it must have fallen victim to the accumulation of house moves in that time. The stories in Suck My Toes move from Sydney to Melbourne, just as I did. The Hume is littered with discarded versions of myself: abandoned objects, dreams packed and unboxed. I search for McGregor’s book online; it arrives from a bookstore in Castlemaine, a pristine copy in a neat package.

The stories in Suck My Toes are gently interlinked; they seem at first coincidental. Gradually, accidents of geography and serendipitously crossed paths reveal characters whose lives intersect and diverge again. The characters in McGregor’s stories are all lost; they search for connection and belonging and try to find a foothold in life’s slipperiness. We learn of their broken dreams and gaze into their uncertain futures as they navigate difficult relationships, flirt with danger and addiction, and explore fantasy and sexuality with only ‘muggers, rapists, fast cars, stray gunmen. Funnel-web spiders. Cockroaches … life’ to be scared of.

McGregor is a fine chronicler of place. Her second novel, Indelible Ink, is one of my favourite renderings of Sydney. Again in this narrative she paints Sydney in all of its contrasting colours; the scenes are laden with an olfactory ambience. Here is the north shore of Sydney with its glittering harbour and foreshore bushland thick with angophoras, the dank smell of earth and high notes of salt water:

sea and sky plastered from ear to ear, cut through by a headland. The bush behind them sways and shirrs; it is a lap cradling them as they watch the movement of wind on water, and the yachts baubled with spinnakers.

And here is the grime of inner Sydney, days reeking of garbage and nights punctuated by the smell of leather, sweat and amyl nitrate:

his vision fragmenting under a relentless strobe … a rain of gold confetti bursting over the crowd. All those waxed narcissi, solarium-perfect tans; tight shorts, Y-fronts and high-heeled shoes; leathermen stepping coolly from one foot to the other.

You can leave Sydney, as I have done, but it never leaves you. Once the harbour pierces your psyche there is never any escaping it. Just reading a description of it shifts something in my brain, stirs a memory, conjures a longing. There is nothing that fires my heart like seeing that furious blue water. Sydney is a minx, an old flame always begging to be rekindled.

When I first read Suck My Toes it was Australian culture as I best understood it: queer Sydney at its flagrant 1990s best; treading the path between the Dome and the Hordern Pavilion at Sleaze Ball; pressing against the sweat-soaked bodies of drag kings and queens; washing up at the Taxi Club when everything else was closed. The spectre of HIV still threatened, a dark storm cloud on a Sydney summer afternoon. Again and again we flocked to the bright lights of Oxford Street like Icarus, always tempted to fly too close to the sun.

Inside the front cover of my copy of Dorothy Porter’s verse novel, The Monkey’s Mask, is a postcard she sent to me; the card is a Turner painting and it is signed ‘Dot’, familiar, like we were old friends. I did not know Dorothy Porter but was moved to write to her after reading this book. This was before social media; it was not so easy to track people down. I sent a letter via her publisher, never expecting her to write back, but she did, twice. The second postcard was a movie poster—Fritz Lang maybe—I have since lost that card. I remember reading that Porter had moved from Sydney to Melbourne; somehow that told me I could too, meanwhile all of my friends in Sydney thought that trading sandstone for bluestone was an inexplicable choice.

It is now ten years since Dorothy Porter died aged 54. I saw her read from The Monkey’s Mask at the Museum of Contemporary Art in Sydney—at least that’s where I remember it was. Memory blurs with time but her performance sticks clearly in my mind; she read poetry like no other. Porter commanded the audience, unspooling an urgent rhythm punctuated with weighted pauses. Listening to her read was like riding the crest of a rolling wave, knowing that it would dump you. She had studied acting and brought poetry to life with verve and a cock-rock swagger.

Only Dorothy Porter could have dreamt up and executed The Monkey’s Mask—a verse novel with a butch lesbian private investigator, Jill Fitzpatrick, as its protagonist—and made it accessible. We follow Jill along the winding roads from the Blue Mountains through the western suburbs to Sydney: ‘thick mists / thick neighbours / and involuntary celibacy / are as inductive to hard drinking / as diesel fumes, high rent / and corrupt cops’.

Jill is searching for Mickey, a missing teenage girl and aspiring poet from a north shore family. The plot moves with the momentum of a bullet; it is close-range poetry delivered point blank. The Monkey’s Mask has all the ingredients of a crime thriller: love, murder, betrayal, fast cars and Diana, a femme fatale whom Jill falls for: ‘In love I’ve got no style / my heart is decked out / in bright pink tracksuit pants.’ The tryst between Jill and Diana is erotic: ‘oh, you were ready / you were eager / wet and open / as Sydney Harbour’. Porter knows how to write about sex.

This is gut-punch writing at its best; spare, tight verse that is at the same time lucid and lyrical. Porter’s poetry is thick with vernacular language. You can tell she had fun writing the book; it is funny, especially when she is having a go at the poetry scene: ‘I never knew poetry / was about / opening your legs / one minute / opening your grave / the next.’

As a teenager, my knowledge of poetry extended to the diet of high school, dead white male poets—Coleridge, Keats, Byron, Donne, Owen—not much I could relate to my life experience. When I read Dorothy Porter’s poetry I finally understood what poetry could be, that it could be about my life: ‘She taught me / pleasure. / What girls know / what girls can do. / I owe her.’ •

Justine Hyde is a library director, writer and critic living in Melbourne and on Twitter, @justine_hyde