When my childhood home in Fitzroy was demolished in 1966 as part of an ill-conceived slum clearance project to make way for high-rise housing, I was devastated. Between my mother’s and father’s families, we had seven extended households in the neighbourhood, including my grandmother, who lived next door to us, and my great-grandmother, who lived over the back fence, in the next street. We moved to the Richmond Housing Commission estate, an experiment in brutalist concrete and barely suppressed social control. I knew nobody on the estate. There were plenty of kids around, many of them tough-looking. I expected I would spend my days having to defend myself, quite literally. But only two days after I’d moved in, a kid who lived in the flat above me passed me on the landing. He stopped me and said ‘do you want to see the river?’

I wasn’t sure if it was a trick, to lure me into an ambush, but I was bored and he was a redhead with freckles, who hardly looked like a local gang leader. We left the estate and walked along a street crowded with factories, including the massive Abbotsford brewery (later to become the CUB brewery). At the end of a dead-end street, we climbed through a wire fence and walked along a narrow dirt track, leading downward through a thicket of blackberry thorns. I began to doubt that my guide was to be trusted just at the moment the track opened and I found myself standing on the bank of the Yarra River, looking across to the majestic eucalypts on the Studley Park side of the river. 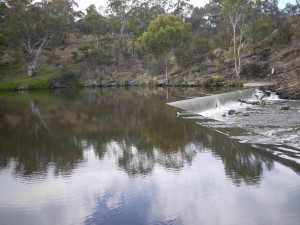 We explored the banks on both sides of the river that day, from the ‘Skipping Girl’ bridge at the end of Victoria Street in Richmond, to Collins Bridge in Abbotsford (behind the Salvation Army store). I went home that night with muddied pants and scratches on my arms, having been whipped by the thorns of the blackberry bushes. I felt exhilarated. I didn’t know it at the time, but I had fallen in love with a place that has remained central to my imaginative thinking, driving much of my writing, both fiction and nonfiction. Over subsequent years I explored the river further, particularly upstream, to the billabongs at Kew and further on; important sites of cultural and spiritual maintenance for Aboriginal people. I also swam in the river each summer and jumped from almost every bridge from Princes Bridge in the city to Kane’s swing bridge at Studley Park. In each of my short story collections, Shadowboxing (2006), Father’s Day (2009), and The Promise (2011), I wrote a story about the Yarra. I also felt driven to write a ‘river novel’ but didn’t seem to be able to find the time—until 2012, when I wrote the first words of my most recent book. 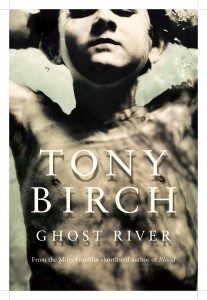 Ghost River is the story of two teenage boys, Ren and Sonny, a pair of misfits, living in a forgotten corner of the city, with an equally forgotten river as their backyard. The boys spend all the time they can on the river, exploring, swimming diving and jumping, just as I had done. But this is not my story. It is a story that belongs to my teenage friends who shared the river with me; friends that I have to this day, with the river binding us together. Ghost River is also the story of the ‘river men’, a group of homeless, alcoholic drifters who befriend the two boys. Led by a great storyteller, Tex, the men mesmerise the boys with their tales, and what appears to be a life of adventure that the boys want for themselves. The novel is also a story of loss and destruction. Ren and Sonny become witness to the menace of machinery that visits their river in and effort to destroy their ‘sacred’ place and replace it with a freeway, stretching into the distant suburbs that are as alien to them as another planet. While they feel helpless to stop the vandalism, it doesn’t stop them trying.

I carry a constant yearning for the river. Some may call it nostalgia. Until recently I taught writing for many years at Melbourne University. Nostalgia is something of a dirty word in the Humanities. Many sneer at it. I think this says more about the emotional bareness of academia than any condition I may be suffering. Some would label it sentimentality. I name it love.

Ghost River by Tony Birch is published by UQP. Find it online here.