In August this year, Sky News broadcast an interview with a Neo Nazi (who thinks you should beat women to control them).

‘It was an error of judgement and we have taken action to ensure our standards, which we are proud of, are maintained.’

A few days after that, a newly-minted Australian Senator said, in his maiden speech:

‘The final solution to the immigration problem of course is a popular vote.’

And a little later, a blatantly insincere defence of the phrase, on the grounds that the words had nothing to do with Hitler’s ‘Final Solution’, and taken out of context.

Are you detecting something of a pattern here? Every time things get a little ethnic-cleansy, it’s walked back — as a mistake, a misinterpretation or a regrettable lapse in normally-solid standards.

Words mean everything and they mean nothing, and intent changes every few seconds. Every little instance of white supremacy is realised through a toxic and poisonous mode of speech that rots the common faith we hold in language and meaning.

‘It’s okay to be white’ (IOTBW) was spawned in the hellish, pasty-white swamp that is the image board 4Chan.
Like so many of their creations, it was a mix of ironic, just-want-to-watch-the-world-burn trolling blended with actual race hate. Newsweek wrote:

‘ “Normies tune in to see what’s going on, see the posters saying It’s Okay to Be White and the media and leftists frothing at the mouth [sic],” the anonymous 4chan user wrote. “Credibility of far left campuses and media gets nuked, massive victory for the right in the culture war.” ’

It slots neatly into a wider project. If you can convince a powerful and comfortable majority that they’re under siege, you can convince them to approve of harm to minorities. So you weave a narrative of pseudo-discrimination.

The Daily Stormer, a Neo-Nazi forum, led the charge. A Target employee in the US printed out cards with slogan and links to the white supremacist site and plugged them into boxes of nappies. There’s a weirdly specific obsession with interracial marriage (‘miscegenation’) in the hashtag.

IOTBW was also championed by David Duke, former ‘Grand Wizard’ (I know, I know) of the Klu Klux Klan, which, let’s face it, slightly ruins more the modern Neo Nazi’s intentions for subtle branding and trolling.

‘The deplorable rise of anti-white racism and attacks on Western Civilisation.’

‘That it is okay to be white.’

(Presumably copied from far-right activist Lauren Southern, who wore the phrase emblazoned on a t-shirt during her tour in Australia, in July)

Incredibly, senators in the Australian government voted in favour of this motion. Though that wasn’t enough to get it over the line, a former KKK leader’s pet slogan was only four votes short of being acknowledged and affirmed by the Australian Senate. 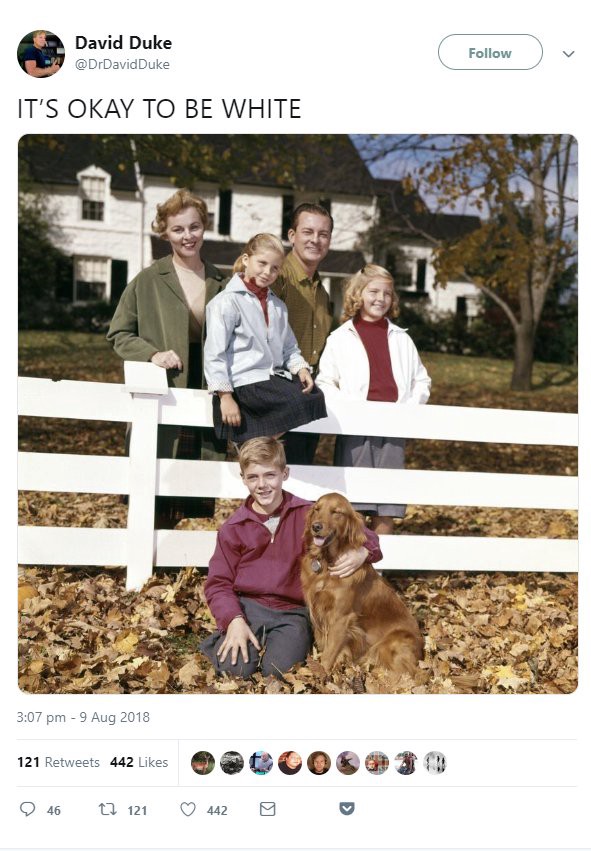 In the ensuing barrage of criticism, a defence was raised — that an ‘administrative error’ led to government Senators voting in favour of the motion:

‘Later, attorney-general Christian Porter said the advice was sent out from his office “without my knowledge”. A staff member had sent it out without checking, he said.’

‘It appears that, of the very large number of motions on which my office’s views are routinely sought, this one was not escalated to me because it was interpreted in my office as a motion opposing racism.’

‘”Naturally I’m reviewing the processes in my office to prevent such an administrative error in the future,” he said.’

Let’s put aside the idea that someone might inadvertently mistake a motion moved by Pauline Hanson as opposed to racism, and the odd statements that accompanied the vote, seemingly affirming it. Let’s also put aside what it means to learn that ‘most senators don’t know what each individual division is about at the time’.

Later, the government re-ran the vote, with the government joining the opposition in voting against it. The damage is already done — a toxic gas injected into discourse, and only the worst people win.

I think part of the reason Australia is such a perfect mark for these half-troll, half-actual-white-supremacist schemes is our tendency to solely consider words on their literal and hermetically sealed meaning, rather than interrogating their use. For the people who use the ambiguity of meaning as a tool in xenophobic advocacy, this is sheer perfection.
Consider this interview with Steve Bannon on the ABC’s Four Corners:

First up, Bannon did say, of the Black Lives Matter movement, ‘What if the people getting shot by the cops did things to deserve it? There are, after all, in this world, some people who are naturally aggressive and violent,’ and ‘when two-thirds or three-quarters of the CEOs in Silicon Valley are from South Asia or from Asia, I think… A country is more than an economy. We’re a civic society.’

But aside from that, Bannon isn’t riding buses and shouting at brown women. He’s calmly delivering a series of unchallenged lies on Australia’s national broadcaster. To Sarah Ferguson, who conducted the interview, Bannon isn’t racist. Bannon weaves his ethno-nationalist influence in the language of 2018 , not 1998.

He does what 4Chan, The Daily Stormer and Lauren Southern have honed in on as a key pathway to normalising the ethos of white nationalism — circumventing the instinctive distaste for too-obvious race hate through code and proxy.

Fraser Anning, and David Duke want to perform the same gymnastics, but they’re too old, clumsy and inflexible, and hence their attempts are blatant foghorns instead of subtle and toxic double-speak. Having a former KKK grand wizard absolutely wrecking the magic of weaponised irony sends those practicing this form of trolling into a meltdown of broken logic.

A particularly telling pre-existing example of this is the ‘white power’ hand symbol — again, a co-production of 4Chan and your bog-standard Neo-Nazis (its use as a ‘white power’ symbol pre-dates 4Chan’s involvement). Emily Pothast writes:

‘Its ambiguity is precisely why it’s such an effective trolling tactic. … When successful, this kind of trolling makes otherwise credible journalists and public intellectuals look like buffoons, either by overreacting to an ambiguous stimulus or by missing the whole context of the gesture.’

More starkly, last Sunday the ABC revealed that the Nationals party, currently in coalition with the Liberal Party to form the Australian government, ‘uncovered a covert plot by Australia’s alt-right movement to join major political parties and influence their policy agendas from within.’ Also struck off as an ‘accident’, and also realised through coded language, like the use of ‘88’ to refer to Adolf Hitler.

‘They’ll say, “It was just a joke, I was just pushing a meme, it was just for fun”. But where there are lots of 14, 88 jokes, Hitler’s birthday, anti-immigration, anti-black, anti-Muslim, liking some pretty extreme and objectionable material, you realise these people actually do have an ideological belief, it’s not just meme-ing and joking around.’

We can’t continue to skirt around the ways language and irony are being weaponised. The digital spaces creating these ideas outpace and outfox old school modes of journalism.

In parallel, ‘classic liberals’ wring their hands about protests and censoriousness threatening free speech and shutting down voices, but are weirdly accommodating of these instances of toxic speech, designed to destabilise, confuse and terrify and ultimately, to incite harm.

Our political obsession with culture war combined with our deep-set repetitiveness and lack of inventiveness make us the perfect target for the hucksters importing dumb-as-hell Neo-Nazi memes. They become circular and infinite. To censor ‘it’s okay to be white’ becomes proof of the victimisation narrative. To allow it furthers the spread of hate. Debating its literal accuracy is fair and balanced.They win every way, hence, it’ll keep happening.

The ‘It’s okay to be white’ ruse is about destruction and destabilisation as much as it is about classic Nazi garbage.

Ketan Joshi is a science communicator working with data science and digital platforms.