It has been announced that the judge’s copy of the 1960 Penguin unexpurgated edition of Lady Chatterley’s Lover from the 1960 trial of Penguin Books under the Obscene Publications Act of 1959 is to be auctioned. This is exciting news to those of us who still wonder nearly sixty years later why the then highly illegal acts of heterosexual buggery that are at the core of the book’s plot were never mentioned by the judge in his summing up and directions to the jury. 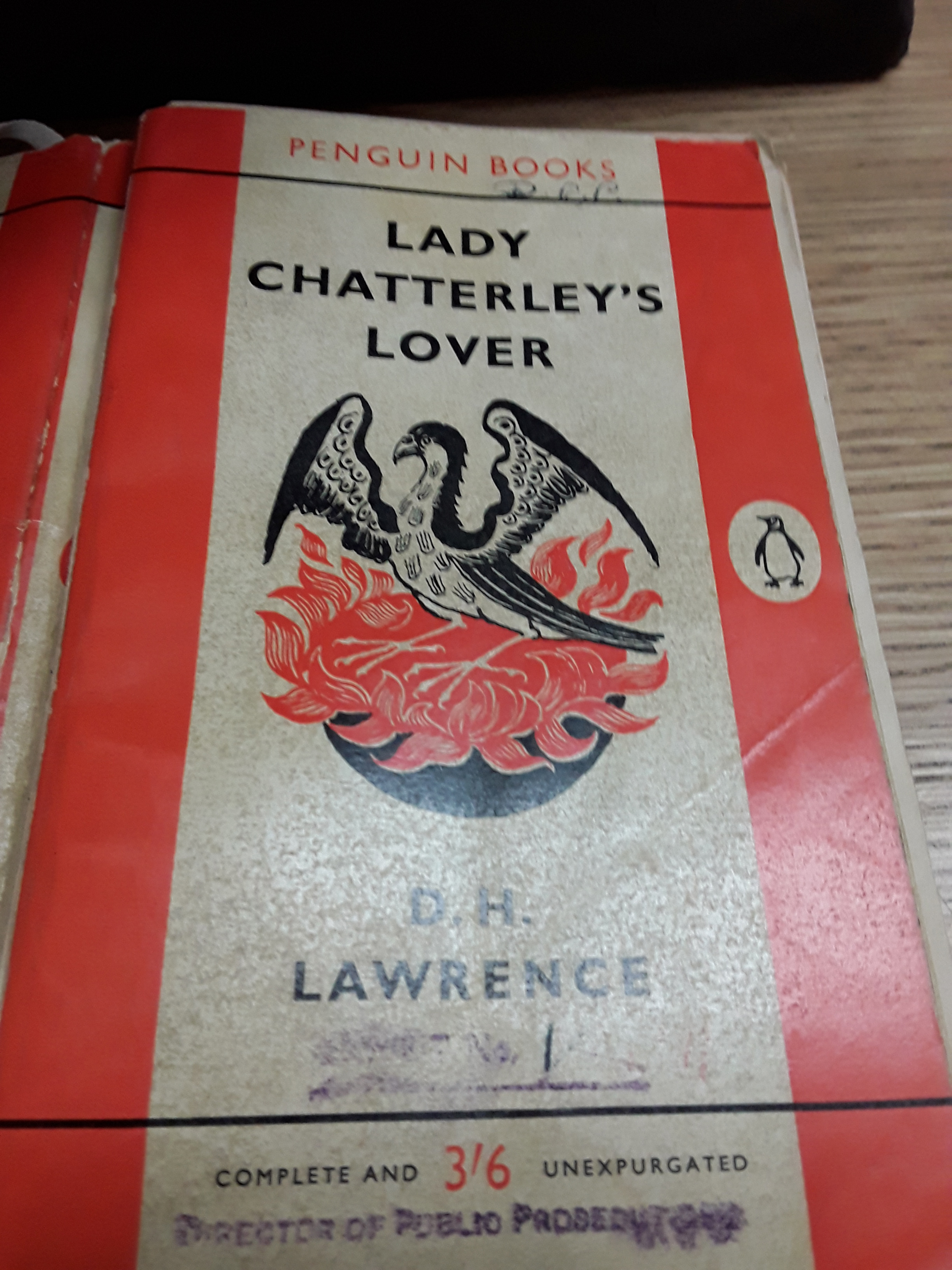 But it’s not actually the most interesting copy of the Penguin paperback that was on trial. That copy lies in the UK National Archives and belonged to the Director of Public Prosecutions who strategised the case against the publisher. His failure to mention the acts of sodomy constrained the judge.

Penguin Ltd wasn’t the first publisher to be tried for releasing DH Lawrence’s last book in the UK. That first took place shortly after Lawrence died in 1929. He and his wife Frieda had been friends with the former Queensland Rhodes Scholar, PR ‘Inky’ Stephensen, who became a libertarian publisher in London with his Mandrake Press. In a plan hatched with Lawrence in his last months, Inky organised a secret London edition of Lady Chatterley’s Lover in 1930 in order to compete with the pirate printings of the novel that were not benefiting the Lawrences financially. They authorised Stephensen to prepare an edition for private subscription in London, though it bore a false imprint indicating that it had been printed in Florence. According to Stephensen’s biographer, Craig Munro, he had some difficulty in finding a printer willing to undertake such a risky job, and eventually the novel was produced in a basement workshop near Euston Station. Munro says that Stephensen ‘believed Lawrence was a genius whose works should be available for posterity intact’. The Mandrake Press edition was offered on subscription ‘for the ten-guinea pigs’, as Lawrence called them, and sixty people signed up for vellum copies priced at a hefty £52.10. According to Munro, Lawrence advised Stephensen not to announce the publication. ‘Makes one sick to think the police might interfere,’ he said. ‘Certainly don’t announce it until you have sent out all your orders… Keep as quiet as possible for the first few weeks. And don’t send out any review copies—why waste them? The book will sell itself.’

And so it would have if an octogenarian magistrate hadn’t ordered them all to be pulped. Mandrake Press folded soon after, and Stephensen returned to Australia, where in 1935, Patrick White’s grazier parents bankrolled his new venture to the tune of £300 as long as it published their lad’s first collection of poetry.

Thirty years after this first try, Penguin Ltd took the opposite tack, sending 15 of the 200 000 printed copies of the paperback to the Director of Public Prosecutions and virtually inviting him to prosecute under the new 1959 Obscene Publications Act. Which he did.

The sodomising of Lady Chatterley by Oliver Mellors is heavily underlined in red on pp. 258–9 of the Director of Public Prosecution’s copy and clearly marked BUGGERY. The ‘shame’ and ‘sensuality’ Lady Chatterley felt about this ‘phallic’ act are frequently circled.

However it was only in his closing speech that the Prosecutor Mr Griffith-Jones said to the jury, ‘Would you look at page 258. It is a passage which I have not—and I do not think anybody has—referred to during the course of cross-examination, or indeed at any time during this trial. It is the passage which describes what is called the “night of sensual passion.”‘ He then read out the passage remarking ‘Not very easy, sometimes, not very easy, you know, to know what in fact he is driving at in that passage.’

It seems that some of the staff in the Director of Prosecutor’s office also found it difficult to understand the passage. There is a notebook in the UK National Archives where the raunchier passages in the novel are annotated. The note for p. 259 is very prosaic, ending with ‘Connie stays the night. Usual intercourse.’ 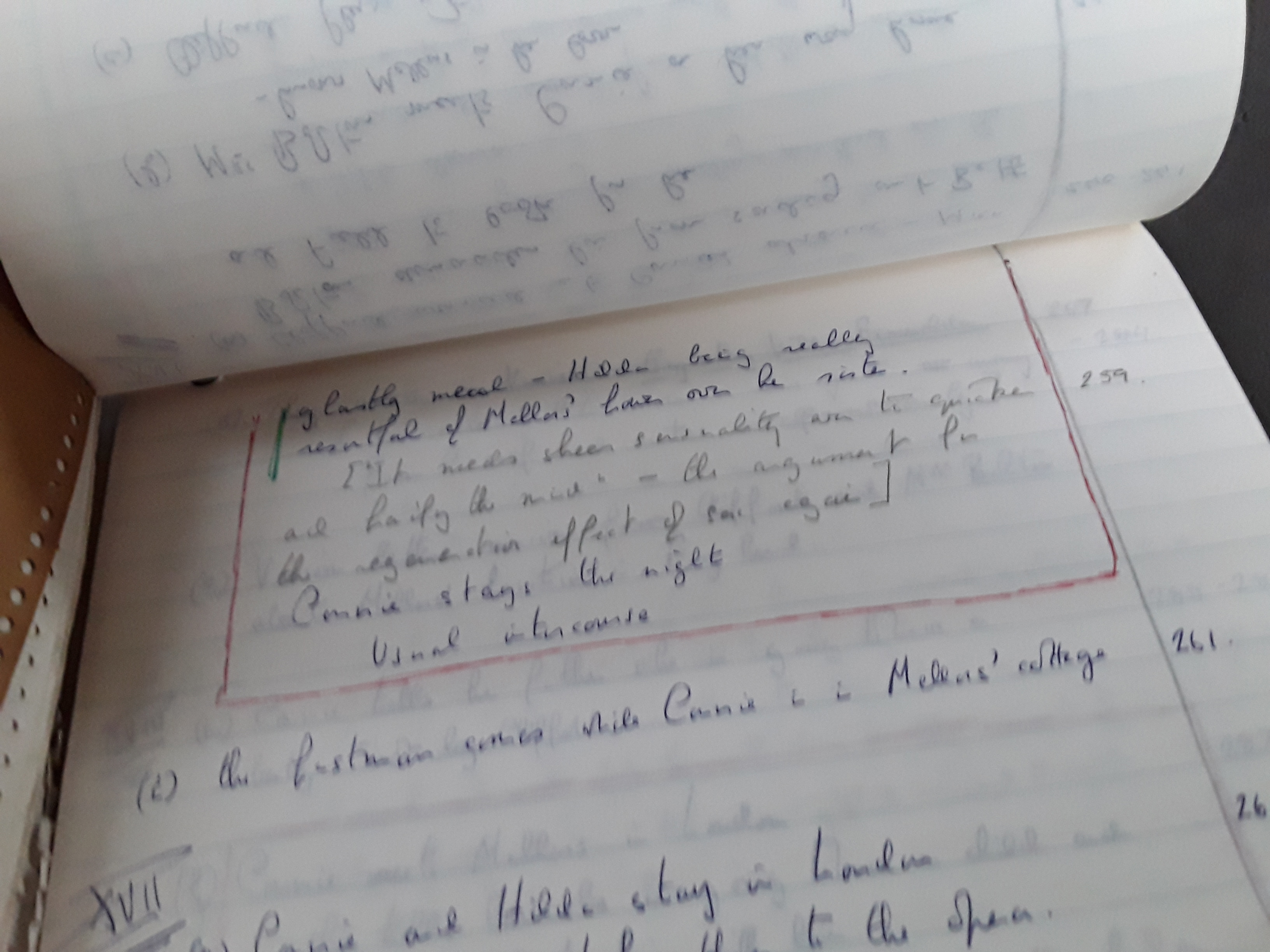 It will be interesting to see what the judge—and his wife who annotated his copy for him and sat on the bench beside him throughout the trial—made of these scenes. In his summing up the judge informed the jury that the issues were obscenity without redeeming literary merit relating to promiscuity and adultery, with no reference to the acts that still could bring life imprisonment in 1960.

Another curiosity of the trial was that none of the 35 witnesses who took the stand in defence of the publication of the book for the public good alluded to the fact that Mellor’s estranged wife was telling anyone who would listen about the ‘unspeakable things’ that went on between them, which Connie Chatterley’s husband Clifford clearly understood to be ‘unusual sexual postures’ that he referred to as ‘the Italian way.’ Or, ‘all ends on’ as Connie’s friend Duncan puts it.

The defence took a calculated gamble. Paul Ferris reported the late Jeremy Hutchinson, one of the lead defence lawyers, wrote to him in December 1990 that:

we avoided the passage but were prepared to put it to our experts if the prosecution raised it. I don’t think [prosecutor] Griffith-Jones saw the implication until it was too late to put it to our witnesses. It was therefore not open to him to make any positive suggestion as to its meaning to the jury in his final speech. So he hinted at it, which was all he could then do.

It was John Sparrow, Warden of All Souls College, Oxford and a trained barrister, who took it upon himself to discuss ‘An Undisclosed Element in the Case’ in the February 1962 issue of Encounter. Sparrow set out clearly that:

The practice approved by Lawrence is that known in English law as buggery. This is to by no means to be equated (as is sometimes ignorantly supposed, and as colloquial usage might suggest) with homosexual practice. ‘Homosexual relations’ means sexual relations between men or between women; under our law, any indulgence in such relations between men (assuming that it constitutes an act of ‘gross indecency’) is an offence punishable by not more than two years’ imprisonment; between women, such indulgence is no offence at all. The ‘full offence’ of buggery, on the other hand, involves penetratio per anum; here, the active party can only, of course, be a man; the passive party may be either a man or a woman; in either case, both parties (even if husband and wife) are liable under our law for imprisonment for life.

Sparrow, himself a well-known though unprosecuted homosexual-around-Oxford, said he was not discussing ‘whether indulgence in these practices is morally wrong, or how wrong it may be, or whether all or any of them should be forbidden by law’ but the fact was that they were forbidden by law at the time he wrote, and at the time Lawrence wrote, and when Penguin published and when the jurors made their decision. 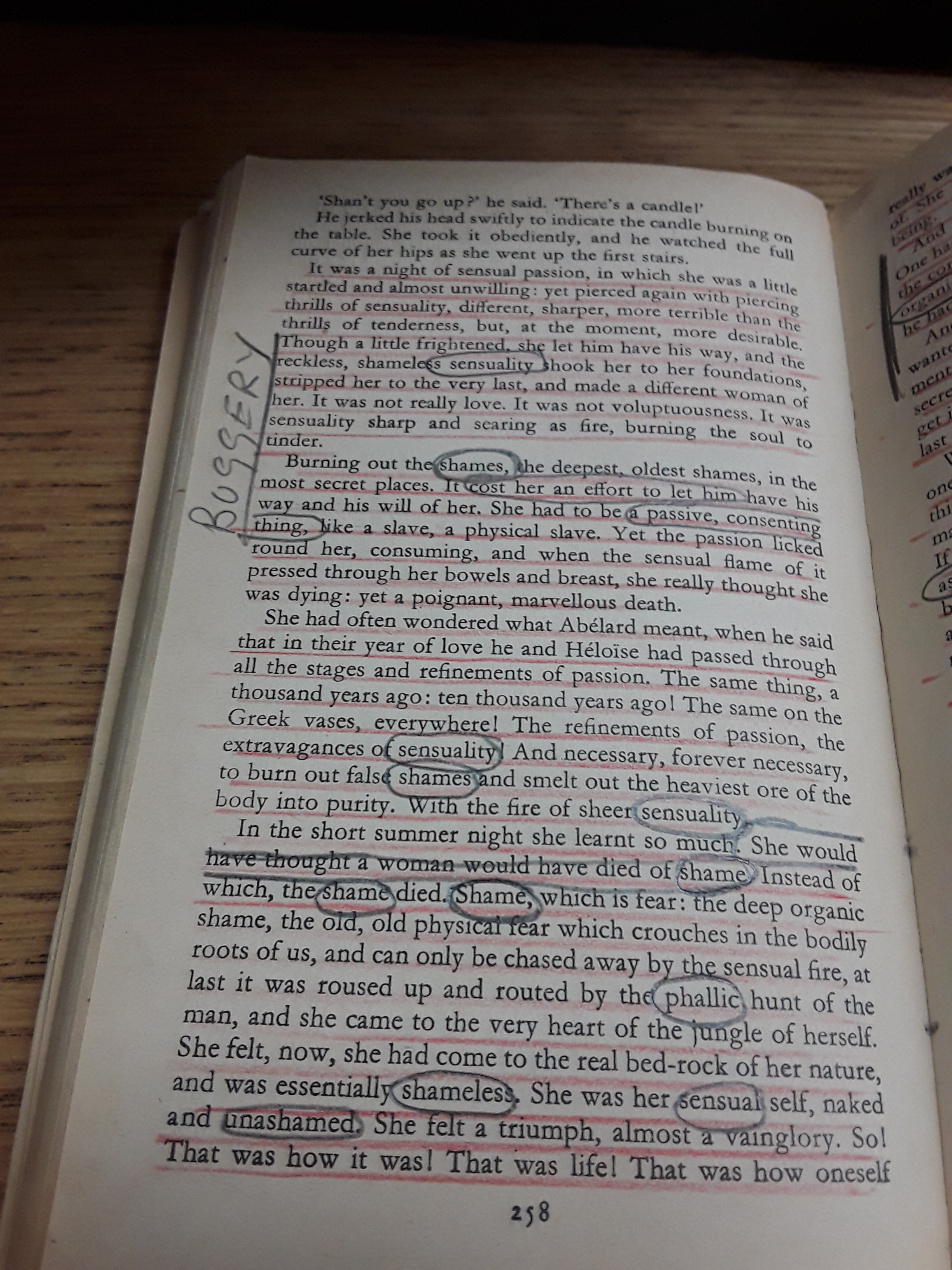 Under the 1959 Act, purple passages, even on the subject of heterosexual buggery (still the ‘abominable crime’), no longer necessarily meant a guilty verdict. Jurors had to ask themselves the commonsense question of whether publication as a whole would do any harm, and if so, whether its literary merit might redeem it.

But the point is that this was not tested in the trial. No witnesses were examined on the issue and it is not clear that they understood they were defending a book that centred not only on promiscuity, adultery and the use of particular words, but on illegal acts that could draw severe prison sentences. Indeed, It will be very interesting to see what the judge and his wife made of pp. 258–9.

Sue Rabbitt Roff grew up in Melbourne where she first read Lady Chatterley at school in the 1960s. Other fruits of her archival research can be found on her website http://www.rabbittreview.com.