When I was a child, I would read the comic strips in the paper as a daily ritual. The subtleties of Cathy, Hagar the Horrible and Wizard of Id were perhaps lost on my tiny self, but I was thrilled by the meticulous minutiae of these characters’ actions—three or four small squares telling a little story, a snippet of a life, their movements represented so precisely. I devoured Peanuts and Far Side books at my cousin’s house, but at some point I stopped reading comics. They were for kids or men or nerds who liked superheroes—they weren’t really for me.

A few years ago, my friend James recommended me the first volume of Brian K Vaughan’s sci-fi epic, Saga. ‘The main character reminds me of you,’ he said. ‘She’s vulgar and hilarious.’ I picked up the book from Kinokuniya in Sydney and flipped it open to the front page, where the character, Alana, is giving birth. ‘Am I shitting? It feels like I’m shitting!’ she screams, the image an extreme close-up of her face. I laughed out loud, then left it forgotten on my bookshelf for a year while I lost myself in more ‘serious’ texts.

The first graphic novel I loved was Art Spiegelman’s Maus—a memoir about his father’s experience as a Holocaust survivor. I was twenty-one years old and borrowed it from my boyfriend, devouring it in gulps over several days. Despite its cast of animals, it felt painfully human to me—I still remember sitting on a train winding its way to my family home in suburban Sydney as I turned to the last page, wiping my nose on my sleeve and sniffling loudly.

As I began to think about uncovering my own family history, and ruminated on the myriad ways in which these complex stories can be told, Maus and Marjane Satrapi’s Persepolis were essential texts—the former especially so because of its depiction of the author’s interview process with his father, something I myself have done sporadically over the past year.

But I had never seen graphic retellings of Vietnamese diaspora until my father gave me a copy of GB Tran’s Vietnamerica, and more recently when I picked up Thi Bui’s The Best We Could Do. For some reason, it never occurred to me that stories from my own motherland could be told this way—through painstaking drawings of the faces that raised us and the lands that we left behind or, in my case, have only ever imagined. 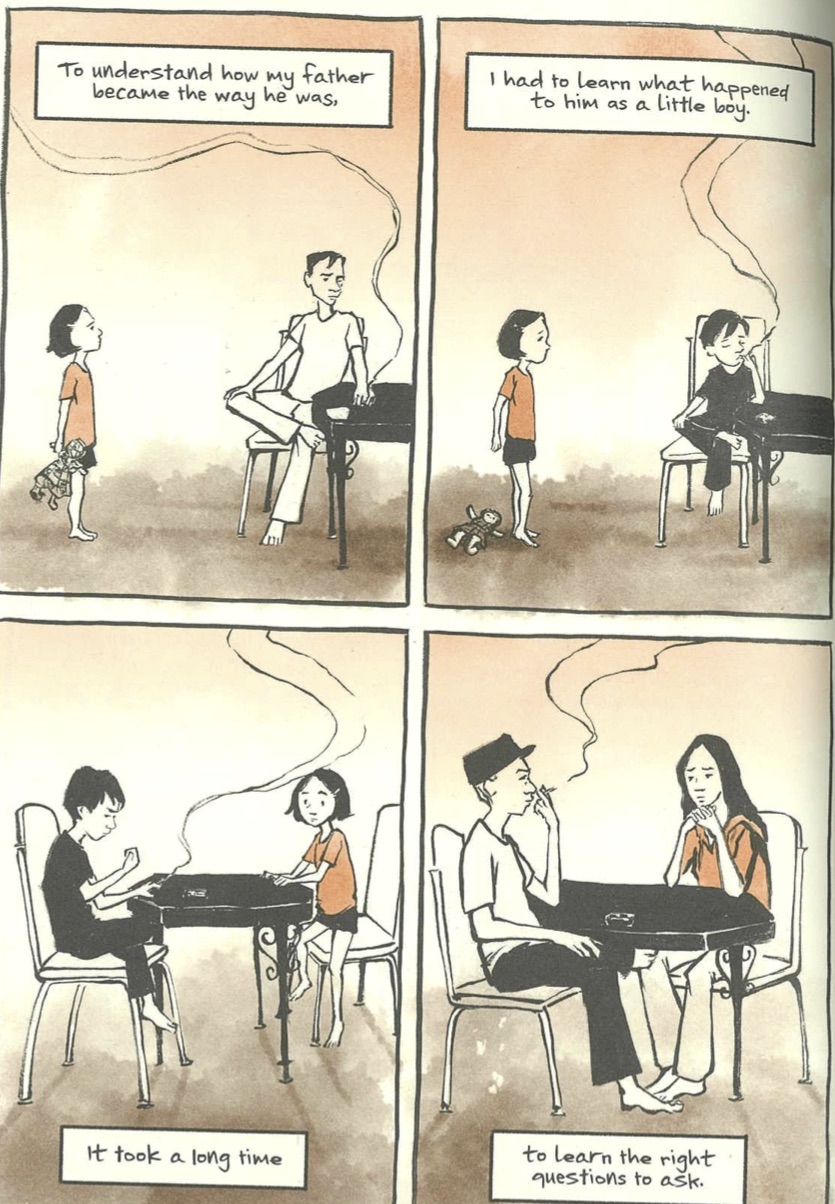 Thi Bui’s The Best We Could Do

Reading The Best We Could Do felt immensely personal, like pages torn from my own life, except Bui was born in Vietnam a few months before the fall of Saigon and fled to the US with her parents aged three, and I was born in Australia 13 years later, and have never seen those shores at all. The ochre and black watercolour lends a nostalgic wash to the story, which is at once a scrupulous retelling of her family’s history, and a reflection of her own feelings both as a member of the diaspora and a mother herself, with all the weight that carries. Parents, she infers, do the best that they can—whether it’s in the aftermath of war and trauma, or in the wake of a new beginning that owes a debt to the sacrifice of forebears. Her interview process, too, is included in the story, and it feels so familiar that it aches—the strange stoicism of Vietnamese fathers, the suppression and release of memories, each uncovered recollection informing our understanding of fleeting moments in the past that felt insignificant back then. It’s an incredibly textured piece of work that is testament to the powerful medium of graphic storytelling—it doesn’t feel like it could have been told any other way—and the importance of passing histories down generationally.

These stories of family struggle and sacrifice are being told in so many ways, but the graphic format allows for an intimacy that other avenues lack. Every brush stroke, every word, was written by hand. The pain, the joy, is plain to see.

At my bookstore job, parents often ask for recommendations for their children. Increasingly, I’ve noticed parents of girls asking for comics—a trend thanks in no small part to the continually growing market for young readers, with classics like The Babysitters Club reimagined in graphic form, series like Lumberjanes celebrating female friendship and authors like Raina Telgemeier, Shannon Hale and Victoria Jamieson penning brightly-coloured, unpretentious graphic novels carrying messages of empowerment.

Recently, the mother of a voracious eleven-year-old reader asked for suggestions, and I put forward Dana Simpson’s Phoebe the Unicorn: a delightful strip series about a girl and her sassy magical equine friend, visible to adults and children alike.

Phoebe was, the customer said, too childish for the pre-teen. The sparkly cover, the cutesy character names, the unicorn—it was more suitable for her six-year-old.

But Phoebe has been the saving grace of my year—the comic I turn to when the realities of life and living are too harsh to bear. I tend to break up my more ‘serious’ reading—tomes on Jim Jones, novels about trauma—with comics for something easier and lighter. I read the first Phoebe book in snatches on a particularly quiet Friday night shift, and have since spent time with her on sleepy tram rides and lazy Sunday afternoons curled up on the couch with a cup of tea and a snoozing cat on my lap. ‘What are you grinning about?’ a friend asked as he returned to our campsite at a music festival to find a very hungover me in fits of giggles, pawing the pages of a Phoebe book. It was infectious, he said. 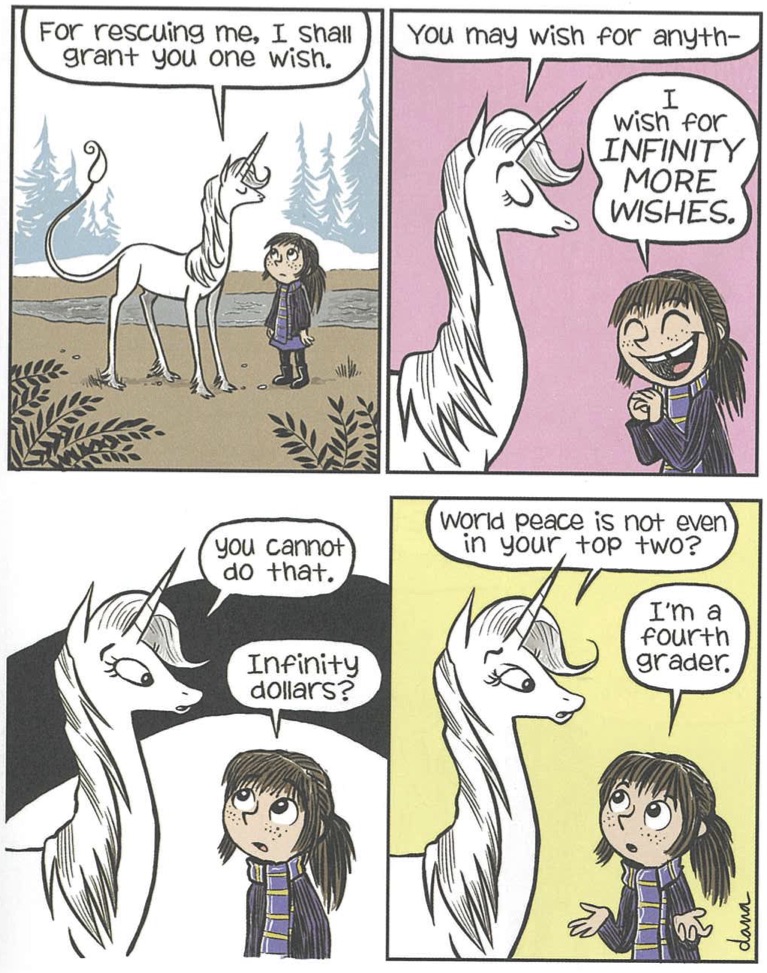 The titular character may be nine years old but she’s sardonic and feisty, offering non-sequiturs that often make me, twenty years older, laugh out loud. Others are sharp, pointed critiques of the world around us. It’s Calvin and Hobbes for a new generation, unashamedly ‘girly’ but so much more than that. I’m taken back to those kitchen table mornings when I’d pore over the back pages over my Coco Pops. I would have loved her then as much as I love her now.

Similarly, Carly Usdin’s Heavy Vinyl is the comic I wish I’d had when I was a music-mad, angsty teenager—the kind who wasn’t like the other girls, with my padlock necklace and sad-boys-playing-bad-punk-music interests. Reading the Scott Pilgrim-esque first trade, I instantly fell head over heels for Chris, a sixteen-year-old queer girl working in a record store. At twenty-nine, I immediately recognised her as the girl I wished I was, reticent as I was even to myself about my own bisexuality. 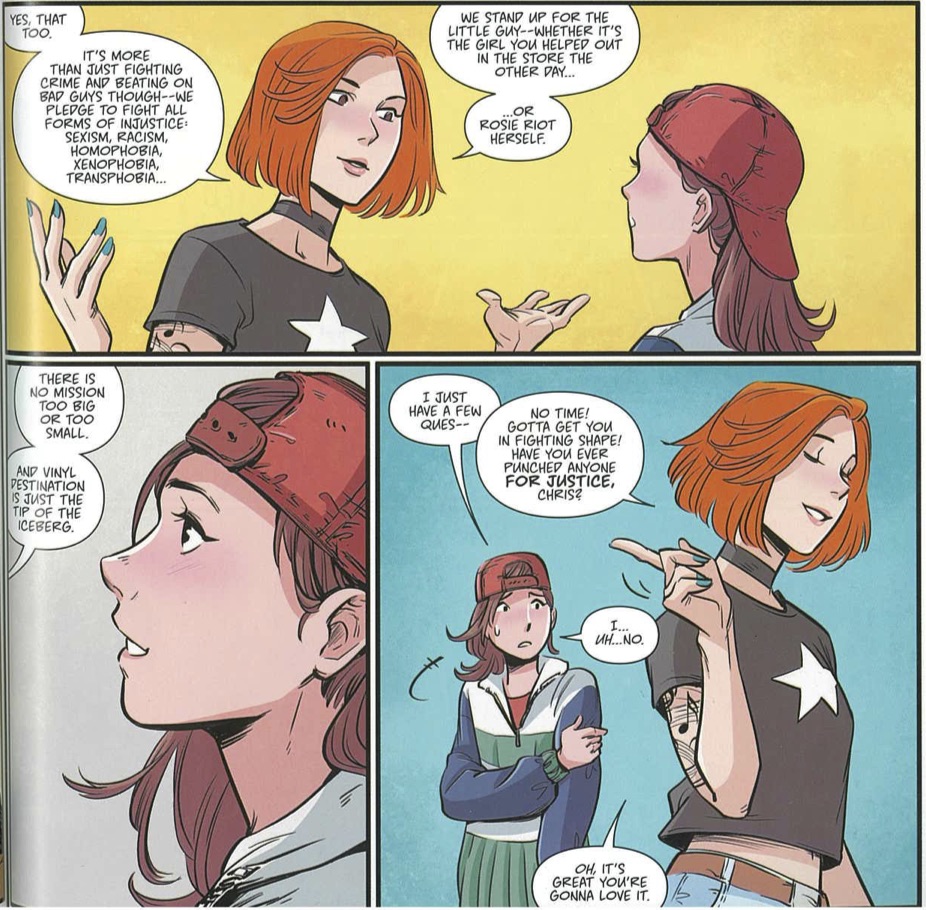 Packed with nerdy music references, mystery and action sequences—it turns out Chris’s new workplace, Vinyl Destination (I know), is a front for an all-girl vigilante squad—it’s the comic I didn’t realise I needed. I tore through it on two bus rides and a lunch break, and am bereft at the thought of waiting probably another year for the next trade. Heavy Vinyl celebrates the power of badass female friendship, and like one of my other favourite series, The Unbeatable Squirrel Girl, offers superhero-like storylines for those not really into the usual bro-heavy offerings of Marvel or DC. Its simplicity feels revelatory.

Graphic novels and comics are often categorised into ‘adult’ and ‘children’s’, but we need to destroy this division—the same snobbery that sees the derision of young adult novels by those who prefer something more ‘literary’. In the last few months I’ve derived so much joy and profundity from these little drawings that are purportedly aimed at children—they teach me to see the world anew through a lens I’d long forgotten I even had access to.

Every time a young girl comes into my workplace looking for comics, I feel honoured that I’m the one that gets to lead them—and both envious and thrilled that their journey is beginning so much sooner than I properly allowed mine to.

When I finally picked Saga up and read it in full, I was hooked. I’d never been interested in sci-fi and there I was, tearing through pages about two star-crossed lovers from warring planets, like a goddamn nerd.

It’s irreverent, sexy and highly original, and it’s singlehandedly responsible for my obsession, now, with the comic series form.

It only comes out about once a year, but when it does, I’m first in line for the new trade.

On the corner of Collins and Queen streets in Melbourne sits one of my favourite places in the world: All Star Comics. It’s like entering a teenager’s bedroom: the walls are lined with posters and memorabilia from comic book series, and tables are stacked with titles alongside lovingly hand-drawn signs.

I walk in with my friend Tegan and we’re like kids in a toy shop, excitedly flicking through new trades of our old favourites, or volumes of series we’ve never heard of before. I’m back on the floor at my cousin’s house, reading Snoopy comics and laughing to myself before being called to dinner. Some weekends we go to the women’s comic book club meetings there, headed by a woman with colourful hair and clothes. We drink cups of tea, colour in comic book characters and discuss our favourite series with people we’ve never met, who somehow feel like our oldest friends.

At the checkout, arms full of books, we’re greeted by the owner—a jovial middle-aged fellow whose head is never without a flat cap. ‘I’ll make that a bit cheaper for you,’ he says on every occasion. As we walk out, he waves cheerily. ‘See you folks next time.’

Giselle Au-Nhien Nguyen is a Melbourne-based Vietnamese-Australian writer and bookseller, and the Marketing & Communications Manager for the Feminist Writers Festival. She is a former Daily Life columnist and has been featured in publications including Kill Your Darlings, The Lifted Brow, Rookie and frankie.