When domestic violence campaigner Rosie Batty first addressed the media after the death of her son Luke she said, ‘I want to tell everybody that family violence happens to everybody. No matter how nice your house is, how intelligent you are. It can happen to anyone, and everyone.’

This idea is brought to life in Elizabeth Harrower’s 1966 novel The Watch Tower, republished recently as part of the Text Classics Series. Protagonist Laura is a young middle-class woman who aspires to be a doctor. She isn’t the stereotyped ‘battered woman’ and her experience represents the pervasive nature of domestic violence; it can happen to anyone. And it does, on an average of two women per week in Australia this year. 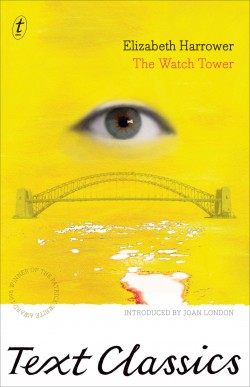 In The Watch Tower, sisters Laura and Clare lose their father and are abandoned by their mother. Laura marries Felix, her boss, and Clare lives with them in a beautiful house: ‘Against the teasing and the employer’s look and tone, she had to weigh the lovely house, the garden and the water-views, and the fact that she and Clare were to be taken care of.’ Harrower builds the tension, and the house soon becomes a symbol for how the women are confined both physically and financially.

Through clear and controlled prose Harrower skilfully portrays domestic life and the loneliness felt by Clare in her isolation, and Laura in her subordination. Felix enters the house while Clare and Laura are in the kitchen, and Harrower writes the anxiety and strain experienced by the characters: ‘Breaking their poses like trees snapping branches, the women urgently regarded each other, cleared away all signs of work in an instant, examined their souls for defects, in a sense crossed themselves, and waited.’

By reading the tension and fear in Harrower’s constructed household of abuse, I have been able to understand, in some small way, the lasting effects of violence that I have seen somebody close to me carry deep into adulthood.

Family and gendered violence is difficult to understand from the outside. It’s so loaded with misperceptions and stereotypes. It’s difficult to express the reality, though we try in innumerable ways (including statistics, infographics, op-eds). Harrower conveys the emotional toll experienced by domestic abuse survivors through her complex and tragic portrayal of Laura, who loses her confidence and sense of self after constant berating and the threat of physical violence from her husband. It gives the reader, and gave me, a small insight that otherwise wouldn’t have been available.

Against society’s resounding call of ‘why doesn’t she leave?’ The Watch Tower works to dismantle stereotypes about a woman’s ability to do so. In Harrower’s novel it’s the financial disempowerment of Clare and Laura that keeps them vulnerable, as well as social expectations from family and friends. When Clare tells her sister Laura that she wants to move out, Laura responds aggressively, smashing plates and telling Clare that she is going to ‘spoil it all.’ Laura prefers to punish Clare, rather than admit that Felix is abusive. When talking to my friend about family violence, she told me her experience was similar: she was asked not to talk to social workers and her family maintained a code of silence and wilful ignorance.

When writing violence in her novel The Untamed State, Roxane Gay said that her intention was to make the reader need to put the book down. The tension and violence in The Watch Tower is too much at times; it feels smothering. It’s an interesting thought that a considerable part of reading practice may not be engaging in the book at all, but stepping away. And as my friend pointed out while discussing The Watch Tower, ‘while you can put the book down, women who are in it or have been in it can’t put their life down. There is no pausing, no space.’

Fiction, and for me, this novel in particular, allows us to greater comprehend the people close to us. Gao Xingjian, a winner of the Nobel Prize for Literature, said ‘It’s in literature that true life can be found. It’s under the mask of fiction that you can tell the truth.’ The Watch Tower allowed me to glimpse the truth of an experience of someone close to me.

For support, contact the National Counselling Service on 1800RESPECT or at 1800respect.org.au.

Katerina Bryant is a writer, editor and law student based in Adelaide, Australia. Her work has appeared in journals such as Overland Online and Voiceworks. She tweets at @katerina_bry.