I was in hospital when the book was first placed in my hands.

A stark ward. Not the kind with bright fish tanks and Captain Starlights that thankfully exist now. Ours was a far more cold reality. White walls and thin blankets and nothing to distract us from our next chemotherapy session.

My mum’s friend Tessa brought in the book. It had just arrived from her homeland of England. Tessa now lived on a wheat and sheep farm in rural WA and suffered severe depression. She needed that book as much as I did.

Masquerade. The name enchanted me. Written in boldly elegant print across the hard, glossy cover. Illustrated below the title was a tree of entangled bark and branches, and a little boy in a starry leotard peering over his shoulder cheekily whilst holding a hare mask to his face. It’s like he was saying to me, ‘Come on, Baldilocks! What are you waiting for? Jump inside!’

On the back cover was a photograph of the most beautiful jewel I had ever seen. Not that I’d seen many, but I knew it was special by the way Tessa’s eyes widened as she stared at the picture. A jewel in the shape of a hare. Delicate gold, with bells dangling from his outstretched paws. His long, lean body encrusted with mother of pearl, rubies, moonstones…

The writer and illustrator, a British artist named Kit Williams, wrote on the first page…

‘Within the pages of this book there is a story told

Of love, adventures, fortunes lost, and a jewel of solid gold.

To solve the hidden riddle, you must use your eyes,

Kit himself had made the jewel and buried it somewhere in the world, and it was up to us—the readers—to follow the clues in the book to work out where it was hidden. By ‘the readers’, I felt sure he meant Tessa and I. It never once crossed my mind that there were other people he could be speaking to, or that the jewel, in fact, may have already been found. Because every time we turned a page in that book, I felt transported to a place that was just for me.

And what a story! The Moon has fallen in love with the Sun. But because they can never meet, the Moon sends her servant Jack Hare on a celestial errand—to give a jewel to the Sun and tell him that the she loves him. We follow Jack’s journey across the universe and meet several eccentric characters along the way—Tara Treetops, a collector of lost dreams. The Man Who Plays the Music That Makes the World Go Round and his tattered violin. And Sir Isaac Newton—unexpected hero.

Kit’s words and illustrations filled me with wonder. They fascinated and frightened me all at once. His drawings were hyper-real—a wrinkled man with striped socks sits atop a weeping sow, a woman with a skirt made of hundreds of pockets sells her wares… His words were so provocatively evocative that I liked to say them out loud, to feel them in my mouth.

I loved his description of the Moon, in particular:

‘Once upon a perfect night, unclouded and still, there came the face of a pale and beautiful lady. The tresses of her hair reached out to make the constellations and the dewy vapours of her gown fell soft upon the land.’

I felt emboldened by the book and its imagery because it didn’t judge me or my predicament. Kit Williams trusted me to follow what intrinsically is a celestial love story entwined with science, mythology and a wry look at life. Kit, from the other side of the world, put his faith in me that I’d search for the hidden clues on every page. And he knew that I would follow Jack Hare on his quest. Tessa and I would stare at a page for hours—literally hours—searching for secret signs and ruminating over riddles as the little hare raced against time.

The stark hospital cubicle became a place of colour and contemplation as we lost ourselves in the world of Masquerade and its wonderful characters. All of them became our constant, joyous companions.

The escape Masquerade gave me was the key to my survival. Unfortunately, Tessa lost her private battle a few years later, her own personal riddle never solved. The book’s unexpected final line, “The sun set and the day was over” still reminds me of her closing the back cover and smiling at me sadly.

In 2008, I tracked down the reclusive Kit Williams and travelled to the UK to meet him. I have never been so nervous in my life. Suddenly, I was sitting in the blooming garden of the man whose curious cross-eyed image I used to stare at on the sleeve of my copy of Masquerade. But I needn’t have worried. Within half an hour of our first meeting, Kit gave me permission to write a play of Masquerade on the stipulation that I include my own story in it and that it was written for  ‘9 to 90 year olds’. 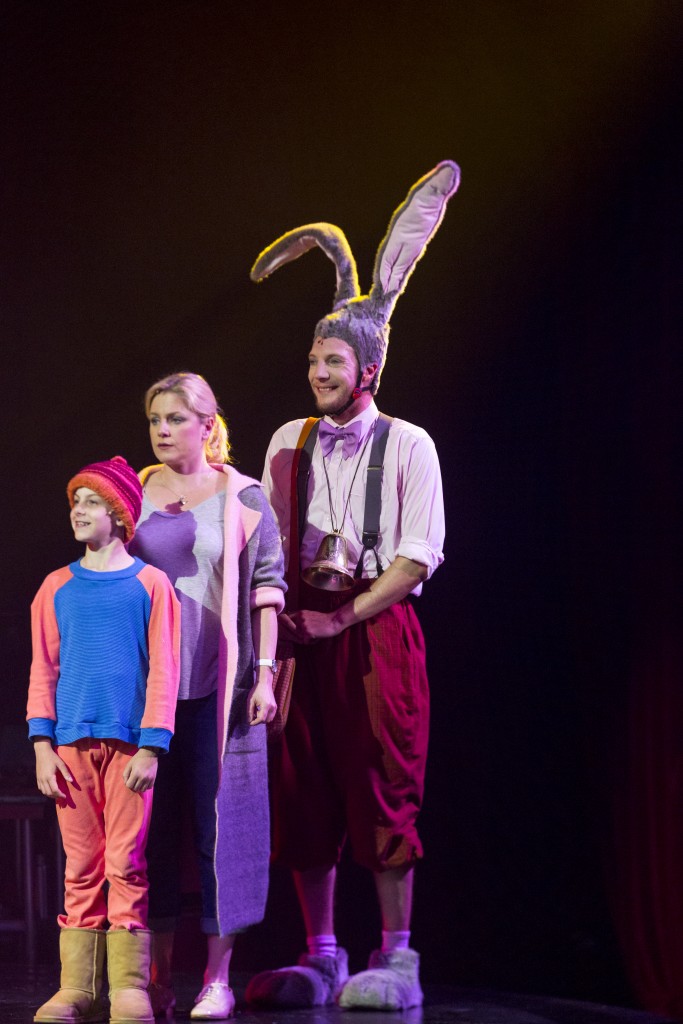 My play Masquerade, nurtured by the Griffin Theatre Company, opened the Sydney Arts Festival in 2015, then went onto Adelaide for State Theatre Company of South Australia, and is about to appear at the Melbourne Festival in October. The lead character is a woman named Tessa, who reads the book Masquerade to her sick child, who is being treated for cancer in a stark hospital ward. As she reads, the cold world of the ward and the vibrant universe of the book collide to become a magnificent musical spectacle that sends them all on a celestial adventure. Our audiences so far have been filled with families—a rare treat in theatre.

The biggest thing I’ve learned from Masquerade is that it’s not really about that glorious jewel. It was never about digging up treasure. It’s about the journey itself. About asking questions of the world around you, listening to the answers you are given, and opening yourself up to the fantastic, whether you’re a child in an oncology ward or a hare on a mission of love.

The true jewel is life.

Kit is now my dear friend. I visit him and his family regularly. We sip cider and eat cheese and go on hikes to pick blackberries and wild garlic. And like a breathless child on a glorious treasure hunt, I never, ever run out of questions to ask him about the Sun, the Moon and everything in-between…

Kate Mulvany is an award-winning playwright, screenwriter, librettist and actor. She has written over 25 plays, including The Seed, The Danger Age and an adaptation of Medea which will be performed at London’s Gate Theatre in November. Kate is the current Patrick White Fellow at STC and the Intersticia Fellow at Bell Shakespeare. Her adaptation of the best-selling book Jasper Jones will be seen on the Belvoir and MTC stages in 2016. She has also worked extensively as an actor on stage and screen, including as Lady Macbeth for Bell Shakespeare and in Baz Luhrmann’s The Great Gatsby. Kate is the ambassador to Agent Orange Justice and MiVAC (Mines, Victims and Clearance), both of which provide relief to the victims of the ongoing effects of war in South East Asia.

Click here for more information on Masquerade, which plays at the Melbourne Festival from October 22 to 25.