Working in New York, with family in Australia, I spend quite a lot of time on airplanes. If I’m not sleeping, I usually work—at least till my brain turns to mush. After that, I usually read. I don’t read fiction much; I prefer philosophy. I figure that there is so much good philosophy I’ve never read, that I’d rather learn about that.

Just before I returned to Australia for Christmas, I was buying books as presents in a New York bookstore, and I came across Basic Writings of Nietzsche, an anthology of some of Nietzsche’s books. Nietzsche is an intriguing philosopher, who I have only ever dipped into in the past. So I thought it would be a good idea to read him a bit more systematically. Since then, the book has been weighing down my hand-luggage.

The first book within a book is Nietzsche’s first book: The Birth of Tragedy. As the name indicates, the book is about the rise (and fall) of Greek tragedy. Now, I don’t know much about Greek tragedy (and, to be honest, don’t really care much), so I didn’t expect to be very interested. But I thought that if one wants to understand a philosopher, it helps to start at the beginning—at least for those philosophers for whom we know where the beginning is. So that’s were I started. 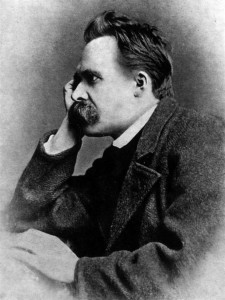 Nietzsche’s aphoristic style makes reading him at once a literary pleasure and a philosophical frustration. The venom of his iconoclasm is elegant; it is easy to see what he is against, but it is often hard to know what he is for. But at any rate, and to my surprise, I did find The Birth of Tragedy illuminating. (I haven’t finished Basic Writings yet.)

The book diagnoses the rise of Greek tragedy as the engagement of two drives: Apollonian insight and the Dionysian love of abandonment. It was killed off by Socratic ‘rationalism’, and is being reborn in the music of Wagner (and perhaps in Nietzsche himself). Nietzsche’s discussion of the Greeks is engaging but impressionistic. How much of it would stand up to modern scholarship, I don’t know—not much, I suspect.

But that’s not where I found the interest. What I found of interest was that the book contained the germ of some of Nietzsche’s most important later views, particularly his view that life should be a passionate struggle. What gives it meaning is constantly facing challenges and overcoming them, or failing, with the consequent pain of this. (See, for example, chapter four of Michael Tanner, Nietzsche: a Very Short Introduction, and chapter one of Lee Spinks, Frederick Nietzsche) Thus, for example, he says of a hero of the piece, the lyric poet (Section 5, p. 48):

… our aesthetics must first solve the problem of how the ‘lyricist’ is possible as an artist—he who, according to the spirit of all ages, is continually saying ‘I’ and running through the entire chromatic scale of his passions. Compared with Homer, Artilochus [a seventh century Greek lyric poet] appalls us by his cries of hatred and scorn, by his drunken outbursts of desire… [H]ow to explain the reverence which was shown him … by the Delphic oracle…?

The content of the tragic myth is, first of all, an epic event and the glorification of the fighting hero. But what is the origin of this enigmatic trait that the suffering and the fate of the hero, the most painful triumphs, the most agonizing oppositions of motives, in short, the exemplification of the wisdom of Silenus [in Greek mythology, Dionysus’ tutor], or, to put it more aesthetically, that which is ugly and disharmonic, is represented ever anew in such countless forms and with such a distinct preference… Surely, a higher pleasure must be perceived in this.

Indeed, in his auto-commentary on the book in the second edition, ‘Attempt at Self-Criticism’, Nietzsche himself points out this prefiguring. Taking up his distaste for Christianity, to be expounded at greater length, again in later works, such as the Genealogy of Morals (Zur Genealogie der Moral, 1887), he says (Sections 5 and 6, pp. 23-3):

In truth, nothing could be more opposed to the purely aesthetic interpretation and justification of the world which are taught in the book than the Christian teaching, which is, and wants to be, only moral and which relegates art, every art, to the realm of lies… Behind this mode of thought and valuation… I never failed to sense a hostility to life itself—a furious, vengeful antipathy for life itself… Christianity was from the very beginning, essentially and fundamentally, life’s nausea and disgust with life, merely concealed behind, masked by, dressed up as faith in ‘another’ or ‘better’ life. Hatred of ‘the world,’ condemnations of the passions, fear of beauty and sensuality, a beyond invented the better to slander this life… all this struck me, no less than the unconditional will of Christianity to recognize only moral values, as … a sign of abysmal sickness, weariness, discouragement, exhaustion, and the impoverishment of life. It was against morality that my instinct turned with this questionable book, long ago… How I regret now that in those days I still lacked the courage (or immodesty?) to permit myself in every way an individual language of my own for such individual views and hazards [rather than deploying the formulas of Schopenhauer and Kant].

Whether or not Nietzsche is right about Christianity, Nietzsche’s thirst for life, with all its highs and lows, is clear.

So much for the view. Now, why do I find it interesting? I strongly believe that Siddhārtha Gautama—the Buddha—got it right; that this mortal coil is suffused with suffering (duḥkha); that suffering is not good, and we would better off without it; that it is caused by the attitudes of attachment and aversion (tṛṣna, literally, thirst) which we bring to bear on the things that happen to us (or at least, that this is the only factor which is under our own control), so that the sensible thing is to get rid of those attitudes.

Nietzsche’s view of life provides, in my view, the most serious challenge to this Buddhist view: meaning is given to life by throwing oneself into it, with whatever duḥkha follows. Indeed, I have always believed in throwing myself into life, so I feel the challenge of Nietzsche’s view very personally.

This is not the place to discuss the matter at length. So let me just say what I think the best reply to this challenge is. One should indeed throw oneself into the things one finds of value—provided that this is not the harming of others. What one should not do, is be attached to these projects, so that when things go wrong—as they surely will sometimes—one can maintain one’s peace of mind. Indeed, such an attitude actually allows one to throw oneself into things more fully, not held back by the fear of the slings and arrows of outrageous fortune. In other words, Buddhism does not free one from life: it frees one for life.

Graham Priest is Distinguished Professor of Philosophy at the Graduate Center, City University of New York, and Boyce Gibson Professor Emeritus at the University of Melbourne. He is known for his work on non-classical logic, metaphysics, the history of philosophy, and Buddhist philosophy.  He has published well over two hundred articles—in nearly every major philosophy and logic journal—and seven books—mostly with Oxford University Press. Further details can be found at: grahampriest.net.