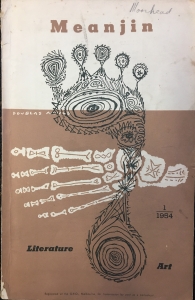 ‘AUSTRALIA DAY’ has come and gone again, causing scarcely a ripple on the stream of national consciousness. For most it means little more than a long holiday week-end, a trip to the beach or the hills or an afternoon at the cricket or the races. And the newspapers run their annual editorial laments on the indifference of the people to our national day.

But are the people really to blame for their lack of enthusiasm and our singularly casual and uninspiring observance?

What does a truly national day demand? A nation is not an artificial thing, based on a date in history or on frontiers or common language or on race or blood. In the past, scholars in an effort to explain nationality with scientific determinism attributed it exclusively to one or other of these factors ; they all play their part, especially language as a symbol and vehicle of national culture.

But we recognize today that nationality is essentially a phenomenon of social psychology, a state of mind and a thing of the spirit, which moves a group of people to consider themselves as forming a community distinct from others, bound together by the same spirit, traditions and cultural ties, and morally united in seeking their own common good.

It follows, therefore, that a truly national day should express that common spirit and have its roots in the real life of the nation. Unless it reflects the traditions, ideals and aspirations of the community, it cannot evoke an answering echo or response in the minds and hearts of the people.

The day we are asked to celebrate has not even the virtue of a definite title. You may call it Foundation Day, Anniversary Day, A.N.A. Day or Australia Day, whatever you prefer. But, worse still, it commemorates a remote and dismal event, which has not the slightest interest for the masses of the Australian people. The landing of Captain Arthur Phillip at Sydney Cove on January 26, 1788 and the raising of the British flag commemorates, if we are realistic, the foundation of an inhuman system of penal colonization.

The idea that Australia was first settled for patriotic motives to forestall its occupation by the French has long since been exploded. But we still cling to an outmoded colonial interpretation of history which endeavoured to idealize the First Fleet and the first foundation.

Modern Australian scholarship has shown that the first settlement was virtually an accident. England had little or no interest in new colonial adventures after the American colonies broke away. And when this avenue was closed to transportation, Whitehall had to find a quick way to relieve her cluttered gaols, which were overflowing into the hulks on the Thames. Australia was the way out, chosen merely to solve a troublesome domestic problem in the cheapest possible way. At Sydney Cove in 1788 there was no thought of an enduring colony, no great imperial design, no vision of a new society and nation.

As the leading historian of our origins has written, ‘probably the most reasonable way to look at the subject is to accept it as an unpleasant fact, from which fortunately all evil effects have long been obliterated in Australia’ ; and, he observes, as ‘the transportation system had little or no influence upon the later development of Australia, the average Australian’s interest in it is as slight as the average Englishman’s in the Norman conquest.’

The Australia we know today, this new nation which has only now emerged into the full light and tumult of history, was devel oped in spite of 1788. Phillip’s colony, and all it stood for, was wiped out by the pioneers who established our traditions and built this nation. Even though descendants of the convicts became brave and enterprising colonists, the first settlement, and all it represented in the scale of values, is now the very antithesis of the spirit and tradition of the Australian people. It was little more than a concentration camp, a by-product of the social injustice of English capitalism, and involved for nearly half a century the tragedy and suffering of countless human lives.

But Australia’s real tradition, now more than a hundred years old, stands for the very opposite: the rights of the common man, the democratic liberties, a contempt for wealth and privilege, and the pursuit of social justice and equal opportunity for all.

In short, the Foundation Day the people are asked to celebrate is not the foundation day of the Australia they love and cherish. It has no roots in their culture, does not commemorate their traditions and ideals, and therefore cannot inspire enthusiasm, firing minds and imaginations with sentiments of patriotism and a sense of nationhood and destiny.

We came nearest to a genuine national spirit in the ‘nineties, the most creative decade in our history, when a period of colonial adolescence was coming to an end and a new nation was struggling to birth. The new spirit abroad in society was idealized by Henry Lawson, William Lane and others, and found expression in the old Bulletin of J. F. Archibald. The new period saw the birth of an indigenous art and literature, of the Australian Labour Party, of the Australian Natives’ Association and reached a climax in the federation of colonies into the Commonwealth, a focal point in our development as a nation. Our young traditions, moulded in struggle and hardship, were finding expression in social and political institutions with roots in the people, for the most striking feature of Federation, a subject so far strangely neglected by contemporary Australian scholarship, is that it was finally achieved because of a popular crusade and that, unlike the unions of America and South Africa, the common people played unto the end a dominant and decisive role.

The foundation of the Commonwealth provides abundant inspiration for a genuine national day. Other nations, both ancient and modern, do not consider themselves tied to the first recorded date of their settlement. Why should we? France, for instance celebrates the Fall of the Bastille, America the Declaration of Independence — days which mean something to their peoples, inspiring them with pride in their living traditions and ideals.

An Australia Day based on the foundation of the Commonwealth would open up rich resources in Australian history, literature and art to the press, radio and other agencies of communication for the education of the people and for reviving our dormant national sentiment, which has suffered arrested development.

The January 26, 1788 is clearly out of touch with the people and the nation and has long been the despair of editors and working journalists, when ‘Australia Day’ comes around. Now that the Commonwealth has entered a new phase of her history in the resurgent world of the Pacific, and ‘New Australians’ of many nations are flocking to our shores, it is high time that we abandoned this meaningless survival of colonialism and endeavoured to establish and develop a truly national day, which mirrors the real life, traditions and ideals of Australia.