An extract from Raimond Gaita’s major essay in the September edition of Meanjin:

‘The phrase ‘the Age of Trump’ will strike some readers as mere hyperbole that, if taken seriously would undermine sober enquiry into the conditions of Trump’s rise to power. He did not come from nowhere, they will point out: Brexit, a general rise in right-wing populism, the Tea Party and the financial interests that back it and associated think tanks either preceded or were contemporaneous with his rise to power. They facilitated it and, in the case of some business interests, may even have engineered it. Other people, while fully acknowledging this, believe that he took the degradation of political conduct and discourse to a new level. Even now, more than two years since he announced he would run for president and nine months since he was elected, many people rub their eyes in disbelief when they see him on television or read his tweets.

‘Never in my lifetime—I’m 71—has a candidate for the highest political office in a Western democracy shown such contempt for the conventions upon which democratic accountability depends. Never has a politician seeking office insulted and threatened so many of his fellow citizens. Trump is praised for giving voice to the justifiable anger of a ‘forgotten’ white working class. The degree to which he did so has been exaggerated, but insofar as he did, he also encouraged in them contempt—even hatred, often racist hatred—for many of their fellow citizens and foreigners, and reckless inattention to the kind of man he is and what he promised he would do.

‘In a tone of knowing worldliness, of common sense and political realism, some commentators now describe him as an unconventional politician who ran an unconventional campaign. Is it merely unconventional to threaten to ban Muslim immigration? To lament the fact that you cannot any more just take hecklers at a rally aside and ‘beat the shit out of them’? To express pleasure at the prospect of torturing suspected terrorists in ways ‘far worse’ than waterboarding them? To lead crowds in the chant ‘lock her up’, when the person they are referring to is your opponent in the race for the presidency? To display such contempt for women that most prominent Republicans disowned him? That was during his campaign. At the time, a CNN reporter said that his opponents did not take him seriously but they did take him literally, whereas his supporters took him seriously but not literally. That was repeated many times to reassure even some of his supporters that he would be different in office because he would be reined in by the Republicans in the House and the Senate and by trusted institutions. He hasn’t changed in office.

‘To call Trump merely a radically unconventional politician is like calling the mafia unconventional debt collectors; it is to fail to understand how important are the conventions, often unspoken, that enable decency in politics. Trump has poured a can of excrement over those conventions.’ 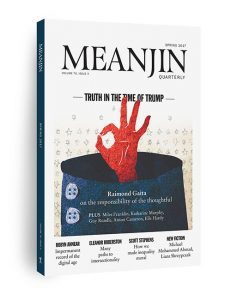 Subscribe to get your copy of the September issue home delivered. Subscriptions are $80 for four issues, postage included. Subscribe now and get a free Meanjin totebag.