Aboriginal poetics have always existed. Or, at least, they fulfil every sense of always that we have access to: yaburuhma, the kind of eternal that spirals out a constant across time and space; forever, the kind of promise we make to spread between every time. Since the land, since the land made us shape, since the land gave us voice, since we had learned enough to inscribe it back, since we took up tools tossed here by the uninvited. We sing it back as it is sung back to us in every bird song, every branch ache, every wave heave. The form has changed, as have we, but the songlines still hum in the soil while we read and write upon it.

Aboriginal poetics have always been caught within the gaze of too little, too much.

After the publication of We Are Going (1964), critics slandered Oodgeroo Noonuccal’s verses as too radical, more propaganda than poetry. Some speculated whether she had written them at all. In 1973, Ruth Doobov wrote of My People (1970), a collection dedicated to those fighting for treaty, that Noonuccal ‘is not in a position to have a very sensitive appreciation of European verse rhythms, but at the same time she cannot use the structure and techniques of the poetry of her Aboriginal ancestors.’ Despite the commercial and cultural success Oodgeroo Noonuccal’s work attracted within and beyond the nation, the poems of protest, remembrance and celebration she performed on the shores of her beloved Minjerribah, and for the Federal Council for the Advancement of Aborigines and Torres Strait Islanders alike, articulated something unsettling in white Australian literary culture. A thing wronged. She was curated and contained, like the municipal gum she so forlornly looked upon: O fellow citizen, / What have they done to us?

Although little commercial opportunity was afforded to Aboriginal poets in the following decades, writers such as Kevin Gilbert and Lionel Fogarty published and performed in every available space. They were met with varying levels of recognition and respect from a conservative settler-colonial literary audience eager to distance the protest from the poetry. Gilbert renounced his first collection End of Dream-Time in 1971, after his editor altered the meaning of the work beyond recognition. ‘The New True Anthem’ is one of Gilbert’s many poems that critique the hypocrisy of the Australian literary and cultural imaginary. Gilbert’s voice speaks to the superficial attempt of a shallow literary nationalism to stake itself on a fetishised landscape in the context of a dwindling British empire. He juxtaposes this facile romanticism against the hypocrisy of Australian authors turning their backs on the blood spilt to dispossess its rightful custodians:

Despite what Dorothea has said

about the sun scorched land

nor sought to make her grand

Fogarty writes of Gilbert and Noonuccal as callers to collaboration: a linguistic resistance to the great venom, the great vernacular against which black writing is performed and energised in communal acts of voice and inscriptions, reminding us how ancestors are made. Please Oodgeroo Noonuccal and Mr Kevin Gilbert pregnant us again, / I all in dawns of the night’s day’s writer’s futures. Our legacies become futures, written from and for anywhere.

Aboriginal poetry is not obliged to respond to the colonial canon, but in this suite we see the concentration of power and perception that Aboriginal voices bring to the institutions and textures of Australian literature’s cultural dominance. Alison Whittaker’s ‘Many Girls White Linen’ peels back the fine dressings and class signifiers concealing structures of violence, exploitation and erasure, the stories rendered spectral and unspoken when later plaques will mark this war. Sam Wagan Watson calls up these ghosts for the hunt in ‘The Grounding Sentence’, shooting down the icons of colonial appropriation from Country scarred by their brandings. Oscillating between grief and rage, despair and warning, inertia wields itself refusing and unreadable:

snares of what the invader prides most of all, and that is

the ability to turn blood against blood. There’s nothing

noble about becoming a savage in the despair of your own

people … I am the most ignorant savage of them all …

I cannot interpret the words of my Dreaming.

Lorna Munro’s ‘YILAALU ‒ BU-GADI (Once Upon a Time in the Bay of Gadi)’ subverts Eurowestern conventions of taxonomy and anthropology through a choral performance of the spatiality of culture. Where modernity demands the binary differentiation of subject and object, Munro’s voice circles the presences and artefacts of culture, arriving at precept and law through that attention, staging honest dialogue with Country to disperse the projected definitions and classifications inscribed on it from above.

As Penny van Toorn has argued, European writing entered Aboriginal life as a vehicle of governmentality and control, and as such will always be marked with these violences. But these poets build as much as they break. The poems of this suite, this anthology, this movement of black poets speaking into the always, is politically necessitated, but never constrained by its context. In our voices, the great venom of the great vernacular Fogarty witnesses can be made deft and tender.

It’s in the gleeful making-visible of materiality in Elizabeth Hodgson’s ‘Boots’: I love the feel of the press of the leather against / my feet tucked snugly inside my boots as the shoe-shine man / works at the leather.

It smiles back in the nervous flirtation of Alf Taylor’s ‘Moorditj Yorgah’: Um gonna get off dis gerbah an’ gunja / an’ show you what a moorditj man I can be / an’ gib you all da lub dat I can / but kurndarnj choo um shame.

Today the new tensions in Australian and global Indigenous poetics emerge less from accusations of simplicity—what Driftpile Cree Nation poet Billy-Ray Belcourt describes as a word to ‘lay me flat on the floor of the world’—and more from anxious cultivations of authenticity in forms and structures that are not yet ready for the fullness of our histories. As black poets, our editorial devices must often negotiate those too littles and too muches that still try to frame the place of our languages in verse. The tension between them operates as a closure:

‘Can you cut back some of the language? It trips up the reader and no-one is going to know what you’re saying.’

There are interesting questions to ask of Aboriginal poetics, and then there are constraining ones. Noonuccal’s longtime friend and collaborator Judith Wright observed this in 1988, asking: ‘Do we go on talking from our critical heights, as though our standards are necessarily to be accepted even by those who have no cause to thank us for them?’ Speaking with and to Aboriginal poetry, there’s so much more to be said about what we’re doing, than what we are not.

We are always writing around the implied subalternity of Aboriginal poets writing in English. These poems demonstrate that there’s fun to be had in satirising the transplanted cadence of Anglo-Saxon verse through fragmentation and irony, straining and interrogating the positionality of settler-colonial poeticism. None of these poems leave English, or the structures it has projected over our Country, unscathed. Across the thematics of temporality, Dreaming, custodianship and love, these poems juxtapose every afterlife of Eurowestern verse imported here off the tall ships against the perpetuity of Culture. We invent new forms: post-canonical, land-centric, kinship-connective, everyday-assertive. As poets we try things on for size, and discard that which cannot speak us. As Fogarty reminds us, Aboriginal poetry is here: Liberating words where we have half the times don’t need words.

These poems push, comforted in the knowledge that our words are more important than the grammars that restrain them. They play, knowing that none of these games are departures from the land which gave us our first languages: even as we invent new forms, we strive towards the textures and memories of those languages.

Aboriginal poetics always have, and always will be here—extending the land and waters into air. Our poetries will grow as we grow, as we remember and return. Our words bear with them more than scholars like myself know what to do with them. They speak to the kind of always that isn’t threatened by worlds spinning on around it. 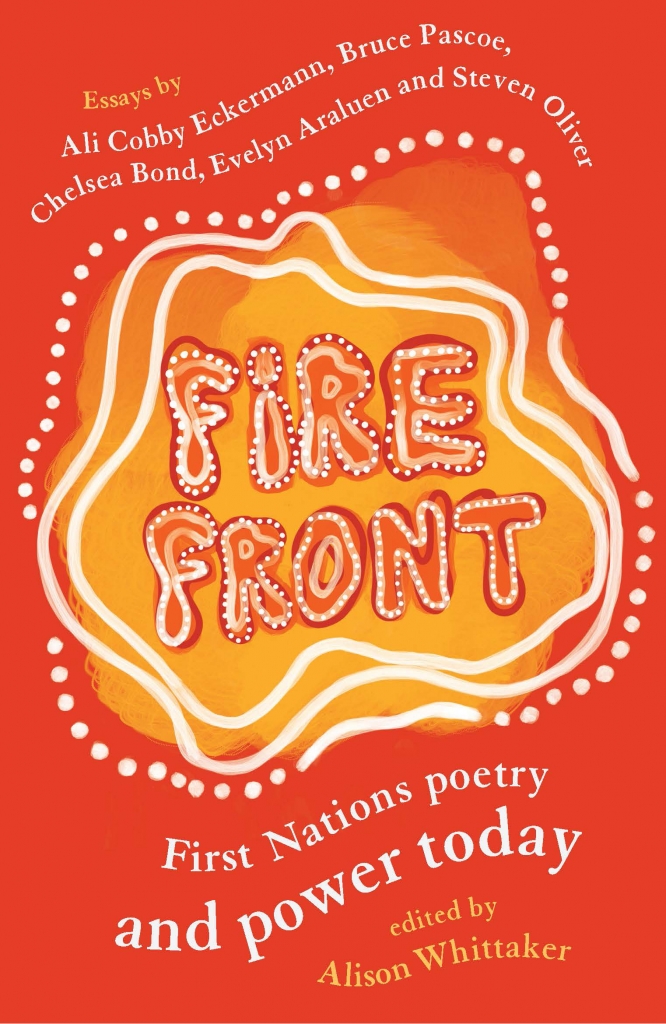 ‘Too Little, Too Much’ by Evelyn Araluen is extracted from Fire Front: First Nations poetry and power today edited by Alison Whittaker (UQP, out now).

Evelyn Araluen is Co-Editor of Overland, as well as a poet, educator and researcher working with Indigenous literatures at the University of Sydney. Her work has won the Nakata Brophy Prize for Young Indigenous Writers, the Overland Judith Wright Poetry Prize, and a Wheeler Centre Next Chapter Fellowship. Her debut poetry collection DROPBEAR will be published by University of Queensland Press in February 2021. Born, raised, and writing in Dharug country, she is a Bundjalung descendant.