I once sat with Fred Fletcher in White’s River Hut, listening to his stories of the years when he had leased the country to run sheep. As a young man in 1939 he had stood on the high crags and watched furnace winds drive flames up the western fall of the Main Range. Fred was one of many I spent time with, reconstructing the story and creating the first-ever map of the Black Friday fires in NSW. That map resurfaced recently when the great champion of climate inaction Bjørn Lomborg downloaded it and it was posted on the page of Craig Kelly MP, the Chairman of the Parliamentary Friends of Australian Coal Exports. 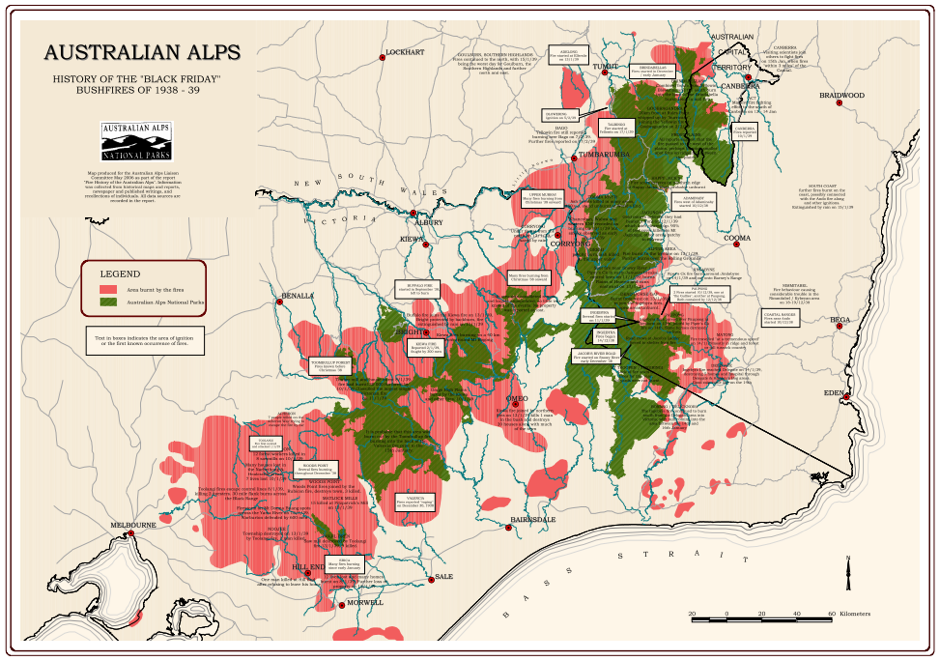 Mr Kelly was attempting to say that we shouldn’t see this season’s fires as unusual because big fires have happened before. 1939 was a good example, possibly the biggest of that era in our part of the country. The question is though: do these events make the point that Mr Kelly thinks they do? Here’s the answer from the book, but I suspect he didn’t read it.

In that book, I travelled Fred’s old snow lease country with him. At one stage I asked him if he ever burnt the shrubs. ‘Heather? No. Some did, but they came back thicker.’ Alpine ecologists have long reported that fact, and Fred wasn’t the only grazier to see it. Roy Hedger used to run sheep near Mt Jagungal, and he said, ‘We would never burn bush country as it would make it worse and bring suckers up.’ Richard Helms had written in 1893: ‘A common and in my opinion a very improvident practice, which will probably be continued, is the constant burning of the forest and scrubs. This proceeding has only a temporary beneficial effect in regard to the improvement of the pasture by the springing up of young grass in places so cleared, for after a year or so the scrub and underwood spring up more densely than ever…’.

Recently, I looked at every fire mapped across these mountains for nearly 60 years, and I found one thing in common from the foothills to the peaks: fire has always followed fire. For a couple of years, it brought quiet, then the undergrowth made the forests up to eight times more likely to re-burn for the next couple of decades until it self-thinned. So why did anyone burn it if this was the result? The answer lies in something else Fred said: he called the shrubs ‘heather’.

Heather is the dominant shrub on the moors of the British Isles, but not naturally so. The moors used to be forest, but they had been cleared for grazing by burning them repeatedly. That practice reached a peak in the early 19th century—right when such graziers moved to Australia. High-country grazing became dominated by big pastoral companies that were based interstate or even overseas, and these companies often employed people to do one thing: set fire to the forest as they had done in England. There were the little men like Fred who watched and learned, but then there were the big men, the corporate burners.

Part of Australia’s whitewashing of history is the story that we burn the bush because that’s what Aboriginal people always did. When there are big fires, the answer is always the same: we should have burnt more. We send out crews with drip torches, vehicle-mounted incendiary launchers and helicopters dropping fire across vast landscapes, but it’s still, apparently, not as much burning as the First Nations did on foot with fire sticks.

Townsend said in 1846: ‘The Blacks had visited the Snowy Mountains, a short time previously to us, for the purpose of getting “Bogongs”, a species of moth, about an inch long, of which they are particularly fond; to obtain them they light large fires, and the consequence was, the country throughout the whole survey was burnt…’. Notice that Townsend didn’t see anyone lighting fires, he just assumed ‘the Blacks’ had done it. In 1895 though, Richard Helms watched moth hunting. The technique was to wave a burning branch over the moths clustered on the cave walls, so that they fell off onto a skin or net. Although this seems a better way to catch moths, our stories favour Townsend’s version where hunters set up camp then lit massive bushfires around themselves at the height of summer.

This is our great fire myth: that First Nations peoples used simple, savage fire. But they didn’t. The little I’ve learnt from elders describes an extraordinarily complex system of controlled burning and exclusion, acquired over one thousand times the span of Mr Kelly’s life. But when the Scottish ‘pioneer’ Angus McMillan opened up the high-country for grazing, he didn’t sit at the feet of the elders to learn. He rounded them up, massacring up to 100 at a time. Townsend’s survey area was burnt because the invaders were British graziers who cleared country using fire. The Snowgums tell the story: a seven-fold increase in fire scars when the invasion came.

So it is that while the Black Friday fires raged 100 years later, Fred Fletcher stood on Dicky Cooper’s Bogong on a Saturday afternoon, watching fire roar up from the deepest valley in Australia. In the following Victorian Royal Commission, Judge Stretton made clear ‘these fires were lit by the hand of man’, just as they had been in every other massive fire since invasion.

It took until the 1950’s before Governments successfully stopped people burning in dangerous conditions, but when they did, the massive fires stopped. Immediately. Big fires did still occur—my dad remembers well driving his bread truck through the eerie darkness of Kiandra in the ’64-65 Ravine fire; but these rarely topped 100,000ha. They burnt across the mountains ahead of a front, then were contained after taking their run. The million-hectare fires of the past were an order of magnitude larger, but these had only happened when people lit many fires at once.

If that was the end of the story, it would be a happy one. Half a century passed without a million-hectare fire when before, there had been one nearly every decade. During that time, however, something else had been happening. The ‘dark Satanic mills’ of the 19th century now dominated the globe. New machines dug fossils from where they had hidden beneath the earth, and we burned them into the atmosphere to power our need for new stuff to throw away. Scientists warned it would change the climate, but the coal and oil giants paid for marketers to confuse the population, paid for politicians to protect their share prices. And the whole earth warmed, until one Saturday in January 2003, a storm front bathed the length of the Australian Alps in lightning. I didn’t see thunderclouds that day, just heat, haze and hot wind; and the million-hectare fires had returned. Lightning and drought have since begun to dominate our hemisphere: they burnt another million hectares of the Alps three years later, then incinerated ancient Tasmanian pencil pines. We no longer needed people to light million-hectare fires; we had made the climate do it for us.

This season though, we were warned that something else was coming, yet another change. The air over Antarctica had been overheated. Without people to help them, the big fires of the past had burnt hundreds of thousands of hectares. This year we saw fires burn over ten million hectares: one hundred times bigger than ‘natural’. Lit by lightning, consuming forests dying for water, many thick with shrubs from burning; now fanned by the dry winds of a collapsed polar vortex. Forests finally burnt that had held off fire since Gondwana: here is the Promised Land to which our salesmen politicians have led us.

Craig Kelly said 1939 showed that massive fires have always happened, but it didn’t. It showed that they only occur when there are massive ignitions. We cause these when we burn too much land and too much coal: burnt offerings to little born-to-rule gods who take what they want. But we’re not gods, we’re just one of the species. If we don’t learn this, we will be just one of the species in the next coal seam. This is the year when we decide.

Dr. Philip Zylstra is an Honorary Research Fellow at the Centre for Sustainable Ecosystem Solutions, University of Wollongong.