Beware Australia’s federal parliamentarians! The historians of the future are watching you.

As the nation’s representatives gather in the nation’s capital over the next weeks to debate the marriage equality bill that our Prime Minister promises us will be law by Christmas, they should take heed: the words they utter will matter.  The way they shape their arguments will matter. Their choice of analogy, metaphor and syntax will matter. The bogeymen or disaster scenarios they concoct to prophesise doom will matter. 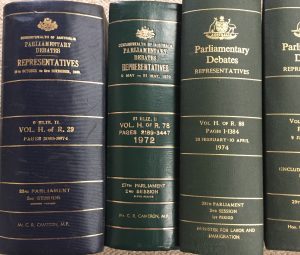 Every utterance of every MP who takes to her or his feet to proclaim, lament, predict, counsel, hand-wring and vote-chase will matter, because of a funny little thing called Hansard.

Long after the newsprint has faded, the tweets have flown the coop and the internet has self-destructed, Hansard will be there to remind us that the politicians of the day had a choice about what they said, and they said things like this:

Surely it is absolutely repugnant to the greater number of the people of the Commonwealth that an Aboriginal man, or Aboriginal lubra or gin—a horrible, degraded, dirty creature—should have the same rights, simply by virtue of being 21 years of age, that we have, after some debate to-day, decided to give to our wives and daughters.

So thundered WA Senator Alexander Perceval Matheson during debate on the Commonwealth Franchise Bill in April 1902.  This vital piece of legislation would determine who was entitled to vote at federal elections.  That is, who could enjoy the fundamental rights of citizenship.

Due to section 44 of the Constitution, which stipulated that no person possessing the franchise under a colonial jurisdiction could lose such rights under a federal system, it was a lay down misere that women would become voters in the new Commonwealth of Australia. That’s because South Australian and Western Australian women already had these rights.

Thus the bill now under consideration provided that ‘all adult persons not under 21 years of age, whether male or female, married or unmarried’ could vote in a federal election.  Senator Glassey took to his feet to reflect on the significance of this moment.

I believe that when the history of the Parliament of the Commonwealth comes to be written, the conferring of this immense boon upon so many people, not as a privilege, but on the grounds of justice and equity will receive the commendation of the historian.

Certainly, a number of politicians, including Prime Minister Edmund Barton, had performed breathtaking political backflips to land on the mat of womanhood suffrage.  If women were to be voters, they might as well vote for him!

But did this logic—whether based on pragmatism or justice—apply to Indigenous Australians?  Certainly not, bellowed Matheson. If the traditional owners of Western Australia could be put on the electoral rolls, he warned, the nation ‘will be swamped by Aboriginal votes’.

Matheson was the most vocal critic of any move to make Indigenous Australians citizens, but his views were echoed by other senators. ‘While I believe in the widest franchise possible for people of our own colour, race and civilisation,’ declared Queensland’s James Stewart, ‘I draw the line very strictly at uncivilised barbarians like the Aborigines of Australia.’  It was all very well for the southern states to shine liberal largesse on the Aborigines, argued Stewart, for they were states ‘which in a very great measure have got rid of the black evil’.

Scots-born Stewart had resided in Australia for less than 15 years (Matheson for only eight) but as sons of Empire both felt authorised to freely express the colonial thinking that divided us from them—and them from their land.

Yet we can’t simply bury the vicious, offensive and deeply damaging nature of their rhetoric under a blanket of historical relativism.  Everyone thought that way, such a rationalisation would suggest, therefore what these men were saying wasn’t that bad.

But not all the men in the Senate that day abided the sentiment.

South Australian Senator Thomas Playford defended the rights of ‘the unfortunate Aboriginal, whose forefathers were here perhaps tens of thousands of years before we came here’.  To exclude them from the franchise would be ‘a heartless thing … and it is absurd that we should say we are so frightened of the original inhabitants of this continent that we dare not allow them the right to vote’.

Richard O’Connor, who had introduced the Franchise Bill into parliament, would also not be silent witness to an historical injustice:

It would be a monstrous thing, an unheard of piece of savagery on our part, to treat the Aboriginals, whose land we were occupying, in such a manner as to deprive them absolutely of any right to vote in their own country, simply on the ground of their colour and because they were Aboriginals.

In the end, O’Connor wasn’t prepared see his bill scuttled by the racist intransigence of his colleagues. He would not sacrifice the most pressing issue of the day—womanhood suffrage—for the sins of the past or untold consequences in the future.

The bill was passed and Australia’s white women won both the right to vote and the right to stand for parliament, the first women in the world to do so. These achievements were rightly celebrated at the time and should be remembered now. But the racist sting in the tail is there on the historical record, faithfully recorded in Hansard, for all to see.

So, haters and bullies, partisans and bigots, do not think your words will go gently into that good night. Your words will be there to wound and insult your victims, and shame and embarrass your descendants, and your nation, long after you have claimed your parliamentary pension in the sky.

Beware Australia’s federal parliamentarians—and rejoice!  However many tumble turns it takes you to get there, you now have the opportunity to be on the right side of history.

Clare Wright is an Associate Professor of History at La Trobe University and the author of The Forgotten Rebels of Eureka, which won the 2014 Stella Prize.  Her next book, which explores Australia’s global leadership in democratic progress during the Federation era, will be published in 2018.