Within the last year and more, I’ve watched myself and other marginalised people around me tell their truths, truths I thought I knew even as our realities keep changing. Whenever I log on to the internet, I’m pressured by the need to continually identify, specify and classify, even if I am reticent offline. My finger is on the page, but movement is disjointed. This happened to me. This is what’s happening right now. Listen, everyone, this is wrong and we need to make things right. The feedback loop picks up on what is more popular and makes them more visible, while the quest for awareness is a never-ending Ouroboros. Who am I trying to convince?

In 1969, at a congress at the National Autonomous University of Mexico, cultural theorist Édouard Glissant pondered: ‘Why must we evaluate people on the scale of the transparency of ideas proposed by the west? […] As far as I’m concerned, a person has the right to be opaque. That doesn’t stop me from liking that person, it doesn’t stop me from working with him, hanging out with him, etc. A racist is someone who refuses what he doesn’t understand. I can accept what I don’t understand.’

Fast forward two decades, and Glissant goes on to question that same process of understanding further. In his book Poetics of Relation, he rejects the western requirement for transparency by suggesting a kind of unknowability that doesn’t hinge on a constant need for explanation—being opaque, then, would mean that the grounds for acceptance would be cut off from the obsession to label and classify. How many different ways can I begin to explain myself to those who will never understand? The philosopher was proposing a framework that sought to reclaim one’s own understanding of themselves, on their own terms.

Therefore, by refusing to explain myself to a dominant centre, I can perhaps begin to unsettle that paradigm and weaponise its absence I’m pursuing relief in group chats and secret Facebook groups, private conversations with like-minded peers and relevant Twitter threads. In an extremely online world where context collapse threatens to conflate colleagues, acquaintances and family members into a single sphere, I’m conserving my reserves to respond only to myself and those like me. Being inscrutable within the algorithmic bubble becomes an act of self-preservation. 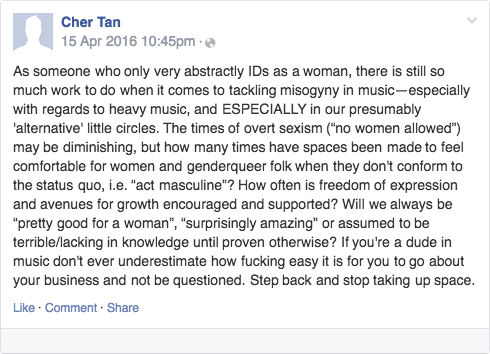 It’s a loud cry for transparency in this moment. Within call-out culture, between the pursuit for accountability and the amplifying of microaggressions, the online landscape never sleeps. Scrolling through my social media feeds, I feel a sense of solidarity that is simultaneously dulled by fatigue. The risk of semantic satiation looms on the horizon as I navigate words that flash brightly—alarmingly—in a sea of sadness, like an LCD sign programmed to loop over and over until its power source cuts out. In my dreams, my personal marquee reads ‘PRIVILEGE TOXIC REPRESENTATION SEXISM’, and I see myself carefully tending to it next to an unnamed freeway; there are many others around me doing the same, but we don’t get too close.

As content grows increasingly abundant and immediately available, the landfill that tries to conjure our attention spans becomes less urgent and diminishes in meaning. This attention economy tells us something about the language of catastrophe—it’s like an encouraging foe; even amidst surveillance and co-optation the compulsion to be seen doesn’t abate. The banal reality of oppression acts as the lush backdrop of a trauma theatre that ends up valuing some voices above others. In discussions around sexual assault and harassment, the image of the ‘perfect victim’ is always implicitly called upon the stand—the responsibility of survivors to rehash their trauma is frequently prioritised over a perpetrator’s ownership of their offence. When I’m trying to convince an (unlimited and unseen) audience, whose benefit is it for? Accountability for whom? I struggle to say ‘me too’, but I don’t know who is listening. Amid the hundred and eleven likes—out of a few hundred connections—a good tenth scarily comes from known abusers, and I receive comments from a white woman who tells me it’s ‘radical’ to break the silence that patriarchy ‘instils in our bones’ (whose bones?), and a white man eager to be on my side but mansplaining my words right back.

The performativity that comes with exposure online focuses on visible figures, and the algorithm hums with delight. But when trauma becomes a display, people unaffected by that trauma think they know all there is to know; caring and inquiry stops there. It becomes a public spectacle to assuage the feelings of those who are standing by, while we keep reiterating what is already known.

As Glissant writes, ‘THE OPAQUE IS NOT THE OBSCURE’, it is that which cannot be reduced. To wit, I can wield opacity as a useful tool in my day-to-day life to provide a safe respite from the myriad social relations that cry out for justification and unambiguity.  Should I explain myself so others can see me as a fuller, more complex human being? Do I need to keep talking about the times I’ve been slighted by whiteness and maleness and heteronormativity in order for my body and mind to be regarded as (more) visible?

To contemplate opacity at this point in time would be to respond to the cultural donnée that applauds visibility of individualised difference as a reprieve from structural oppression. Silence only appears threatening because it forces us to interrogate the atmosphere instead of putting blame onto a single person. I’ll blame Johnny, but not the structures Johnny tries to replicate. And everyone else pats me on the back: that was really brave, thank you for speaking out.

In an era of the hive mind, the cloud is buzzing with activity but we’re slowly becoming desensitised. Gender studies researcher Nikita Dhawan talks about ‘hegemonic listening’: actively looking for the things that speak to what one believes in and holds on to as important while dismissing the supposedly mundane, which echoes neoliberal understandings of discrimination. I think about the times I speak publicly about oppression, only for the minute details to be cherry-picked or questioned, but celebrated and retweeted when I word it just right.

Whose stories are believed more than others; who gets to be more vocal; who is silenced? If speaking is cathartic, who are we speaking to?  When what is said acts in tandem with a perceived authenticity, the loudest voices are heard once more. Already, we’re seeing Audre Lorde’s radical theory surrounding ‘self-care’ re-interpreted as the license to do absolutely anything for the sake of the individual.

But then there’s the twist: as the fight for certain kinds of representation becomes more pronounced, as more and more of us get subsumed into the survival of the fittest, our voices come at the behest of the prevailing narrative yet at the expense of other Others. It’s what Dhawan refers to as a ‘counter-discourse’, which ironically leans on dominant discourses to render themselves legible. In other words, the contest for visibility can also act as a double-edged sword, especially when assimilated into and monetised by the very structures that complement the building blocks of domination. I remember conveying this schism to a friend—however, they tell me that visibility is important because the truth needs to be shown.

But who needs to be shown that truth? Whose anxieties are being placated; who is looking on? Already, there have been so many receipts, centuries worth to fill an entire repository. Not just memories, but research, texts, DMs, emails, tweets. We know what all the -isms look like, but not what power does.

When someone puts themselves on the stand, they’re inviting others to listen as they testify. The legal process listens with a measured amount of compassion, but often at the expense of objectivity, often propped up by the status quo. I’m consuming someone else’s slight, but within the limits of what I know and understand. As a result, my capacity for compassion feels incomplete. It’s like a rendition of the jerk chicken that I haven’t had, but imagined through proxies—a taste I’ve come to expect, but never personally memorialised.

In a 1986 interview on ABC Radio National about multiculturalism in Australia, Gayatri Spivak incisively said, ‘[…] the question “Who should speak?” is less crucial than “Who will listen?”’ By insisting on a subversive silence that aims to challenge the dominant standard, she was suggesting that it would, albeit gingerly, create a space for the unsaid to emerge. When silence is turned on its head, the power dynamic between speakers and what Spivak deems ‘cardcarrying listeners’ immediately ruptures; in this case, silence is not taken as passive but imbued with a sense of strength. Thus, whoever is willing to undertake this inward interrogation gets a deeper sense of the governing atmosphere. I’m inscrutable on purpose, but I can parody myself, follow an unexpected trajectory, be as inauthentic as possible—vis-à-vis contradictory histories within my lineage. And those who inhabit similar realities commiserate, away from the prying eyes of the free market.

There isn’t a moral in this story insofar that these understandings keep repeating themselves. They’re only new in relation to who is willing to know or explicate them now. What kind of material conditions need to be set in place so that the speaker and listener are both level on the same plane? What sort of faces would speaking take on if the rules no longer depended on the myth of the glorified survivor, the one who is courageous enough to explain themselves to those who demand to understand? What would the canon look like if, like Glissant mentioned, ‘relation is not made of things that are foreign but of shared knowledge’? Until then, our voices remain—in an echo chamber that gradually oozes out to destroy particular ceilings, but still containing those same voices within a wider, yet contained, dome.

Cher Tan is a freelance writer in Kaurna country/Adelaide. She writes mostly on tech, identity, politics and culture. Her work has appeared in Kill Your Darlings, The Lifted Brow, i-D, Overland, Right Now and VICE, amongst others. She is the author of cultural criticism food/book journal Cooking The Books and can also be  found at @mxcreant.