Americans have massacres down to a fine art now. Round the clock coverage with brutal back to back eyewitness testimonies. Rapid-fire branding of perpetrators with throwaway insults like ‘coward’. Hollow promises made by local authorities that they absolutely positively won’t let this atrocity change us.

Ask anyone who’s felt anxious in the middle of a packed cinema, been in the vicinity of a backfiring car, or—in my case this afternoon —within earshot of a dropped chess set on a tiled bar floor, everybody in America is already well and truly changed.

For writers, it’s hard to find new ways to think about something that’s not only far from rare, but which has been analysed and autopsied and agonised over within an inch of its life/death. Surely all the angles—from the impotence of thoughts/prayers/policymakers, to feminist laments about the lack of focus on toxic masculinity, to follow-the-money stories on arms sales—have by now been plundered.

Cue Neil deGrasse Tyson. Cue a tweet mansplaining all else that happens on a given weekend in America that’s so much more common—think suicides and flu deaths—than 29 people killed in the El Paso and Dayton massacres. 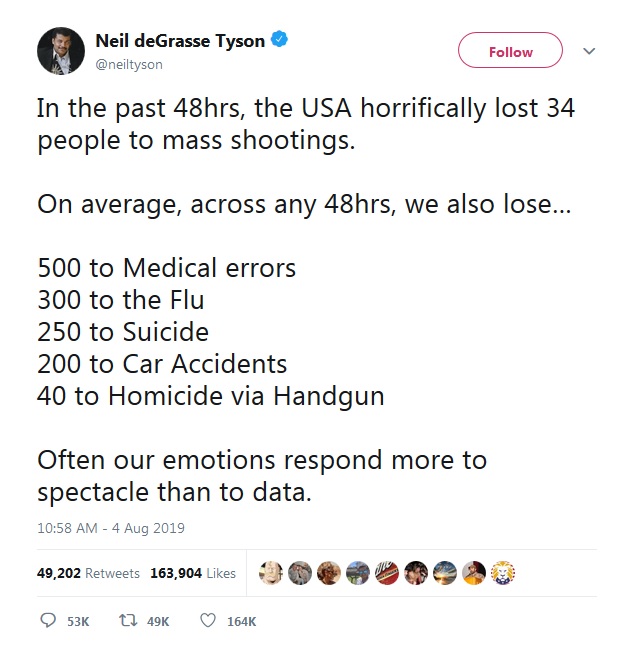 Of all the bloodbath hot takes I’ve read of late, hours on and deGrasse Tyson’s still smarts. It’s, alas, little more than a gussied up incarnation of the #firstworldproblems critique: as though those families mourning loved ones, those lying broken in hospital beds, those survivors who dodged bullets, and each of us who had to talk ourselves into going outdoors today—are being indulgent. As though if only we had a better grasp of the data we’d realise that the real threats are car crashes and hospital hiccups. As though, if we weren’t being such drama queens, we’d realise that mass shootings aren’t anywhere near the problem we’re kidded into believing they are.

DeGrasse Tyson’s tweet illustrates a thorough failing to understand the depth of grief and fear in the US. He’s a man who proverbially, failed to read the room, and the true hot take is yet another male scientist who thinks he’s too smart, too reasoned, to feel anything and believes that everyone else needs to dry their eyes, pull themselves up by their bootstraps and get a bloody grip.

And yet, like anything that manages to burrow under my skin and truly irk me, he’s got a tiny point there under all the hubris and heartlessness. Spectacle. DeGrasse Tyson’s right on that point. Mass shootings are a spectacle in the United States. They’re breaking news/normal-programming-has-been-interrupted/social media saturating stories where it becomes impossible to think about anything else. It’s blanket coverage. It’s a story we don’t want to hear told to us over and over again. It’s footage we never needed to see, replayed until it’s seared onto our retina. It’s families whose pain we’ve no right to observe yet it’s inescapable, and it’s a well-rehearsed routine of candlelight vigils, and stories of spectacular heroism, with just enough time to catch our breath before the performance-of-slaughter cycle repeats itself.

The sticking point though is there’s no ready remedy to spectacle. How else do we ethically report on people being mown down in public space by weapons of war? How better can we shine a light on home-grown terrorism, on the consequences of a country with more guns than people, on what happens when hate gets validated from on high? How do we not talk about it endlessly?

We can—and should—absolutely have the conversation about whether reporting on such carnage leads to copycats, about whether we’ve all become desensitised and completely lost track of which massacre we’re talking about. About whether the side effect of such high-level fear and anxiety only works to benefit gun sales.

But the spectacle doesn’t magically disappear just because a bow-tied scientist labels it.

For over half a century now media scholars have been thinking and writing about spectacles. Branding events as such—all while bodies remain in situ in a carpark—only serves to shame those of us who are eyeing exits in theatres and feeling heightened worry in crowded places, and completely fails to shine any light on de Grasse Tyson’s list of sidelined social issues. Because along with our anguish and angst, we’re now wasting energies dwelling on a truly terribly timed tweet and have no emotional reserves left to think about medical malpractice or influenza victims.

Lauren Rosewarne is a Senior Lecturer at the University of Melbourne and currently a Visiting Professor at Wesleyan University, USA. She is the author of ten books on gender, sexuality and the media.