For at least three days in June 2019 gangs of drunken English soccer ‘fans’ laid siege to the beautiful Portuguese city of Porto. Apparently, they were there for the Europa Cup but sport had nothing to do with their behaviour. All night they roamed the streets singing and chanting inane songs punctuated with God Save the Queen and Rule Britannia. Shirtless, tattooed, short back and sides and loafers were their uniform. Their days were spent drinking and littering the streets. The amount of rubbish they left behind was astounding; much of it plastic beer cups strewn everywhere and no doubt, washed by the rain that fell, into the Douro River and Atlantic Ocean.

Their disrespect for local people and culture cannot be measured. Guide signs to historic and religious monuments were defaced with soccer stickers, you know, ‘Liverpool are magic’, that kind of thing. Fights were common and the local police were on constant alert. A kind of medieval battle took place between the fans and the police in the city centre where large TV screens had been set up. I couldn’t leave them behind quickly enough. A local policeman told me that Portugal looked forward to changes in immigration laws when Britain left the European Union. During this time it was also reported in the world media that four men had bashed two young gay women on a bus in London for refusing to kiss each other in response to their demands.

The English soccer fans made for a dark beginning for me to the Camino Portuguese from Porto to Santiago de Compostela in June 2019. A close friend said the world had gone mad and she was right. Nothing made sense. A few weeks later Vladimir Putin announced to the world in an interview with The Financial Times before the G20 in Japan, that liberal democracy is dead and the attempted murder of two Russians in Salisbury didn’t amount to five kopecks. Dark times indeed.

Shortly before my annual pilgrimage to Santiago de Compostela in Spain I sat in the County Court for a month in a regional city in Victoria. The district was bathed in constant late autumn sun. Occasionally it rained but the climate didn’t seem right for Victoria at that time of the year. Large mobs of Eastern grey roos congregated by a lake, despite its high salinity. They looked intently at me as I trained for the next Camino. 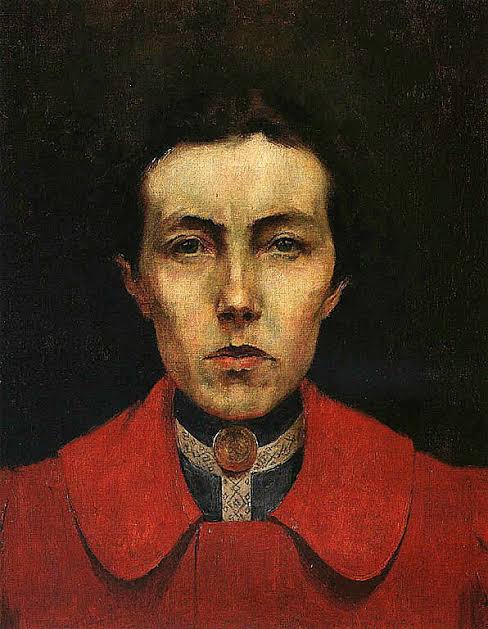 The Camino Portuguese may be walked from Lisbon or Porto and either inland or along the Atlantic coast. I chose to take the inland route from Porto, a distance of around 260km. As with previous walks I was interested in the visual arts of the place and the time. And so before setting off from Porto, amid the horror of the soccer fans, I went to the Museu Nacional Soares dos Reis to see Aurelia de Sousa’s celebrated self portrait painted in Porto in 1900 (above). A still and serious picture she has a look of our time, intense, dignified and questioning. Her other work generally concerns the day to day business of life; food, cooking, work and the seasons. Still life, if you will. The themes that keep us all going today. Her self portrait reflects that truth. I arrived at the museum on a wet morning and made my way to the gallery where the self portrait hangs. What really took me to that room that day will remain a mystery. I was interested in the painting but sensed there was more to the story.

And so it was; on the adjacent wall to the painting hangs a portrait of an ‘Aboriginal King’ (below) also painted in 1900 by Artur Loureiro, a Portuguese artist, probably in the  Heidelberg area of Melbourne. The brush strokes are those of a talented, sensitive painter. They emit truth. Loureiro had moved to Australia in 1884 and painted with the Heidelberg School artists. He was on the Board of the National Gallery of Victoria and taught art at the Presbyterian Ladies College then located in East Melbourne. It is a painting not driven by the patronising racism of the time. The King is depicted with dignity and respect, sitting in calm pose in the gently-lit landscape. Loureiro returned to Porto in 1901 and no doubt he and Aurelia were colleagues. I stood alone in the gallery gazing at the paintings completed at the time of Australian Federation; an assured calm woman and man in that time and that place.

The following morning I took the metro to Matosinhos and to the bridge over the Douro River to begin this Camino. The first day would be along the Atlantic before the central route. I thought about the darkness in Porto, of Aurelia, Artur and what lay ahead. And of my work at the court.

I walked along the Atlantic coast through the fishing villages, along the boardwalks and over the sand dunes. The first day of a Camino is a mixture of joy and hesitation. I’ve seen many first-day injuries and took my time. The fishing villages are a colourful disorganised product of the sea they face.

The Atlantic receded as I arrived in Vila da Conde. As the clearing wind and space of the ocean left me to the west and I entered the Minho valley, the reality of subsistence living was revealed. With a complex history of Roman occupation followed by its own history of the occupation of Africa, Asia and South America, Portugal today is one of the poorest developed nations in the world. Subsistence was the story of those days on the Camino; small family food plots, spare rundown towns and simple food. Much of the way is on granite cobble stone paths and back country roads. The chapels are simple, uniform and domed. There is little of the Romanesque architecture one encounters in Spain. In short, as I walked on, this journey became one of time and distance. But at its heart lay a mystery that I could not define. Aurelia’s gaze came back again and again, the King sitting in the grass in Melbourne, and my work. An aching uncertainty coloured the landscape and the towns.

As I lay in my bunk in Redondela, exhausted and with the smell of the albergue for company, I understood that this was a choice that I had made. In previous years I was guided by the beauty and deep spiritual energy of the Spanish caminos I completed. But this was not that journey. This was fundamentally about me. I became unsettled and concerned for my safety walking along the roads as vehicles sped past. However, the sublime Vinho Verde of the region made for relaxing evenings. Why was I here?  Aurelia’s knowing gaze entered my psyche. From time to time I watched the world news. It did not calm my uncertainty.

Portugal and Spain in this location are separated by the River Minho. On either side are two medieval towns; Valenca in Portugal and Tui in Spain. A late 19th Century steel bridge crosses the river. In the early morning I rose and walked through the empty ancient town of Valenca. Walking along a smooth flagstone path I came to a wooden gate built many centuries ago. The soft light fell on the stones and revealed in the distance the mountains of Galicia.

I walked  through the gate, over the bridge and into Spain.

I do not pretend for a moment that some transfiguration took place that morning. But the moment gave me hope. The profound beauty and immense history of that gate lifted my spirits. Aurelia’s gaze lifted me too. I thought of the dignity of the King and my desire for justice.

Prior to taking the train to Porto to start the Camino, I had stopped in Lisbon. One night I visited a student Fado bar in the Alfama district. At first the bar was quiet before a young man began to play the violin. He was joined by another on piano. Two men arrived with a guitar and a guitarra. A young woman began to sing Fado and another joined her in the chorus. Others joined in until finally a truly great Fado singer sang alone accompanied by the guitarists. Fado is the music born in the Alfama from struggle and hope. It is driven by saudade, a Portuguese word impossible to truly translate into English but akin to longing and perhaps, hope over hopelessness. Looking back and writing this today I understand that night in Lisbon was when this story began.

It has been reported that Keith Haring once asked of the contemporary American artist George Condo ‘What is more important, life or art ?’ I was struck by the irrelevance of that choice. For me the question is ‘What is life without art?’ But for the music, my visit to the gallery in Porto and the two works I have written about, I fear this Camino and the setting in which took place may have led me to a more lasting state of despair. The grim dark journey etching itself into my outlook.

And I fear that life as a judge can do that too. Grim dark tales unfolding again and again in court. I know the work has taken that toll on me and on others. Recent research has revealed that to the community, who now judge judges more and more assertively.

I walked on through the Spanish countryside arriving in Santiago two weeks after departing Porto. The square in front of the cathedral was crowded with pilgrims all of whom had undertaken a journey along the paths traversed for centuries by others.

Shortly before Santiago I arrived at the satellite town of Milladoiro. It takes its name from the Spanish word humilladoiro the place where pilgrims would lay on the ground in an act of humility as the towers of the cathedral were first revealed over the trees. Before them lay the hope and protection of their belief. I stopped for lunch in Milladoiro in a restaurant below an apartment complex. Despite the banality of the setting, hope emerged for me too.

This Camino, the Portuguese, lifted the veil cast over the effects of my work on me. I’d parked it, debriefed, exercised, headed to the coast, did yoga and mindfulness, surfed more, drank less, ate better, read more fiction, spent less time on my phone, looked after Sam outside the supermarket more, but I hadn’t been to the dark place walking alone along a four kilometre stretch of road in oppressive heat through a disintegrating Portuguese industrial estate. It’s not for everyone, but that road took me to the gate at Valenca and the beautiful mountains beyond. And I knew when I crossed the bridge over the Minho river that there is no life without art and if I remembered the moments in the Alfama, the museum in Porto, Aurelia and the King, I’d be okay to go back to court.

Judge Mark E. Dean was appointed to the County Court of Victoria in September 2010. Prior to his appointment he had practised at the Victorian Bar since 1983. He was appointed Senior Counsel in 2001.