My maternal grandmother, the last of my grandparents, celebrated her 85th birthday yesterday. I watch on a video screen as she eats her breakfast long-life noodles. The boiled egg left whole: an embryo, the universe, the beginning and the end. I surprise myself by thinking and speaking in Hokkien. I don’t speak this language to anyone else. I have not spoken in this tongue since the last time I saw her, months ago, in Singapore.

She passes the phone to my mother. It is the first time we have spoken in weeks, though we have texted. My parents have been travelling. She wants to know how the Prime Minister’s Literary Awards ceremony went. I tell her I was the only Asian in the room. She tells me she is proud of me. Try harder, she says. ‘Try harder’ is a catchphrase I have heard all my life. ‘Better luck next time,’ ‘bad luck’, ‘too bad’. Ours is a family that tries harder. Ours is a culture that believes in better luck, next time.

I spoke to my father’s mother in the months before she died, years ago, my eldest uncle translating. As her story progressed, his translation became more skeletal. What I gathered: my grandmother had been a child bride, married off in poverty to another family in the village. She begged her mother to let her return home. No, for shame. Within the month, my grandmother, aged 16, with the help of her brothers, scaled a village wall and boarded a boat bound for Malaysia. I didn’t speak Hakka, and still don’t. There are so many gaps in this story.

When I was nine, I would accompany my mother’s mother during the school holidays to various homes of her friends’ where she would play mahjong. She was a formidable player who would gamble all day. I would bring books with me to fill the hours. She wasn’t happy with me. Books, books, books—a homophone for lose in Mandarin. Her worker’s hands sweeping over the restless tiles.

I see my psychologist the week before the prize is announced. She tells me to shop for a new dress. She tells me I have already won. But in my world, winning is not winning until you have won completely. I smile a lot at the event. I am happy to be there. I am proud to be standing with my fellow poets. They don’t see colour. I am seated at lunch, and I realise I don’t see colour, either. I am the only person of colour seated in this room.

I go for a walk. In the gardens of Parliament House, I see two men in chef’s whites on their smoke break. They are Chinese. I stop in the bathroom. It is shut for cleaning. I call out and ask where the nearest open bathroom is. The cleaner comes out, smiling, and directs me down the hallway. She, too, is Asian. I head back to lunch. I sit down again, and a waiter comes up and offers me a drink. I look up. His name-tag says ‘Edward’. I tell him, Edward, we are the only Asians in this room. He says, Well, there’s another one of us, but she’s just finished her shift. We smile at each other. He moves on to serve someone else.

So, my people are here—invisible, but present. I feel like a fraud: sitting down to lunch, being served. The poets are at another table. I make literary small talk with a historian. I ask him how he became a writer. He says he was born into a family of writers. The publisher to my right is puzzled when I tell her my publisher is not my editor; that I edit my own work, mostly. I cannot tell if she is puzzled because it is different for writers who aren’t poets, or because of how I look. I am embarrassed that I even think this.

I tell someone I admire how much I like his work. He returns the compliment by telling me that many of my poems are like recipes, and if I collected them into a book, I might have some success with it. I am speechless. I feel put in my place, and ashamed. I return to my table. My husband is sitting there, waiting for me.

My husband is six feet tall, with ash-blonde hair and blue eyes. He looks particularly dashing today in a suit. People detect his faint Scottish accent and almost always want to ask him about it. When we turned up at the doors of Parliament House, I asked the security guard where to go for the event. He gave the answer to my husband. A woman just inside the doors was checking names off a list. She asked for our names, looking at my husband. When we went to the counter to pick up our security passes, the officer asked which shortlist category my husband was in. Later, as we walked away from the desk, my husband and I exchanged meaningful looks. He said, It’s the suit. But we both know better. Later, we perfect the script. When someone speaks to him, he says, loudly and proudly, Eileen has shortlisted for poetry. I’m the handbag.

It is a relief when my name was pronounced correctly at the award announcements; I had raised it with the organisers prior to the event. I was brought up with my name pronounced ‘Ee-leen’, as an Anglicisation of my Chinese name, Yilin. For years I answered to ‘Ai-leen’—it’s an Irish name, your name is Ei-leen. It was easier not to fight. The name of my book was mispronounced as Painting Red Orchards. I quite like the notion of red orchards; rows of trees teeming with fruit, glossy, heavy, ready for harvest.

Some months ago, my mother held a cooking class at her community centre in Sydney. She wanted to teach her students how to cook Hainanese chicken rice and asked me to help her with the recipe. I told her to write it in as much detail as she could, and then I would edit it. She came over one afternoon and I opened up my laptop, ready to type. She handed me her notes. They were indecipherable. I had never asked to read anything my mother had written before. This was going to take some time.

My mother does not understand what I do for a living. She has never read any of my books. She has attended some of my readings, but we don’t discuss my poems. She tells me I look good on stage. On Saturdays, when I buy flowers and arrange them in a vase, she tells me I should be a florist. When I colour her hair in the laundry sink, she says that I could be a hairdresser. These are real jobs, involving real work.

We are sitting at my kitchen table. I ask my mother for an equipment list and an ingredient list. Then we start to cook. Step-by-step, she tells me what she is doing, and I put words to it. She mimes lifting a chicken out of hot stock. I ask her what she is using, her hands? She laughs. We settle on tongs. She moves her hand in a circular fashion over an imaginary chicken. I say drizzle. Two hours later, we have her recipe. I print it out, and title it: Diana’s Hainanese Chicken Rice. She is shy at our creation. She holds the recipe in her hands, and reads it. She looks up and says to me, You are a writer.

The historian at my table asked me how I became a writer. I tell him both my grandmothers were illiterate. That I didn’t grow up with books in the house. That no one read to me when I was a child. That I taught myself to read when I was six. I was sitting on the floor, turning the pages of a library book, and the meaning of the words started to surface—the story was about a monkey in a tree. I was born in the year of the monkey.

I climbed up to the kitchen shelves where my mother’s cookbooks were. I started to read: I pored over all the beautiful photographs of food, all the precise measurements and methods. By the time I went to primary school, I knew the difference between boil, poach, bake, fry, grill. Fry is what my maternal grandmother did to noodles at a hawker stall in Albert Complex in Singapore. She cooked fried Hokkien prawn noodles for paying customers at $1 a plate, and put six children through school; three went to university, including my auntie. My eldest uncle has a PhD.

In the kitchen in my apartment in Sydney, there is a photograph of my grandmother smiling down at me, eating the fried Hokkien prawn noodles I cooked for her from her recipe. Some of my poems might look like recipes, because my first words were gleaned from the need for nourishment, from the obsession over how to feed a family, how to keep them clothed, safe, and warm. I am safe, warm, and fed. I am writing, and I am seated at the table. My people exist. You know who we are. Look at us. Speak with us. Listen to us. We are one, and we are many. Let us feast together. 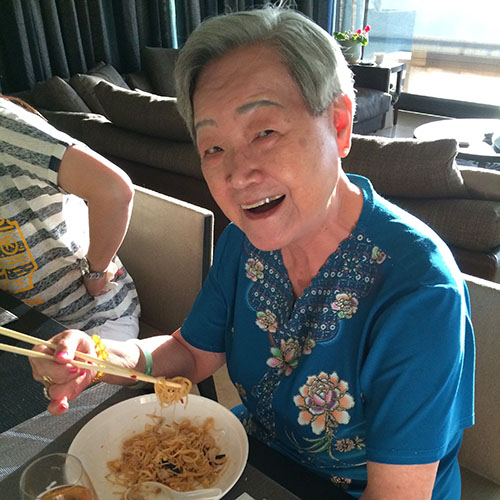 Eileen Chong is a Sydney poet who was born in Singapore. Her books are Burning Rice (2012), Peony (2014), Painting Red Orchids (2016), and Rainforest (forthcoming in 2018), all from Pitt Street Poetry. Her work has shortlisted for numerous prizes, including the Anne Elder Award, the Victorian Premier’s Literary Award, and twice for the Prime Minister’s Literary Awards. Another Language has just been published by George Braziller, New York, with a foreword by Paul Kane. www.eileenchong.com.au