We’ve just had one of those lovely moments in the life of the nation where normally invisible truths are made manifest.

In a welcome return to actual politics, the election campaign—so far, a miserable pantomime orchestrated by an image-obsessed prime minister conspiring with an easily led press corps, and more than half-helped by an Opposition scared to death of upsetting the horses—ignited around the issue of a wage increase for Australia’s lowest paid workers.

The moment was like one those heist movies where the cat burglar breaks into the museum and sprays the air to reveal the invisible lines of power that criss-cross the space between the door and display cabinet that the burglar must now negotiate with balletic movements in order not to trip the alarm.

Except, for once, Anthony Albanese wasn’t willing to dance.

He strode across the room, announcing that he ‘absolutely’ supported a 5.1% pay increase via the Fair Work Commission, and as he did so, the criss-crossing lines of power in Australia lit up and set alarm bells ringing.

To use a different movie reference, Frodo Albanese had entered Shelob’s lair, tripped the silken web, and a big fucking spider was now looming above him.

In unison, key sections of the media, along with all-known employer groups, and, of course, the Liberal-National Party government led by Scott Morrison, rose as one to ward off the threat, the very suggestion that a wage rise was possible.

In fact, they assured us, it threatened to destroy the country.

‘It will crush the country’ that organ of corporate power, The Australian Financial Review assured us in a headline, going on to say:

Employers and economists are warning that Labor leader Anthony Albanese’s advocacy for pay rises greater than 5 per cent to keep pace with soaring cost of living will crush businesses, fuel inflation and put upward pressure on interest rates.

One of the employers himself took to Twitter, billionaire owner, Sam Kennard, threatening capital flight, in the time-honoured tradition. 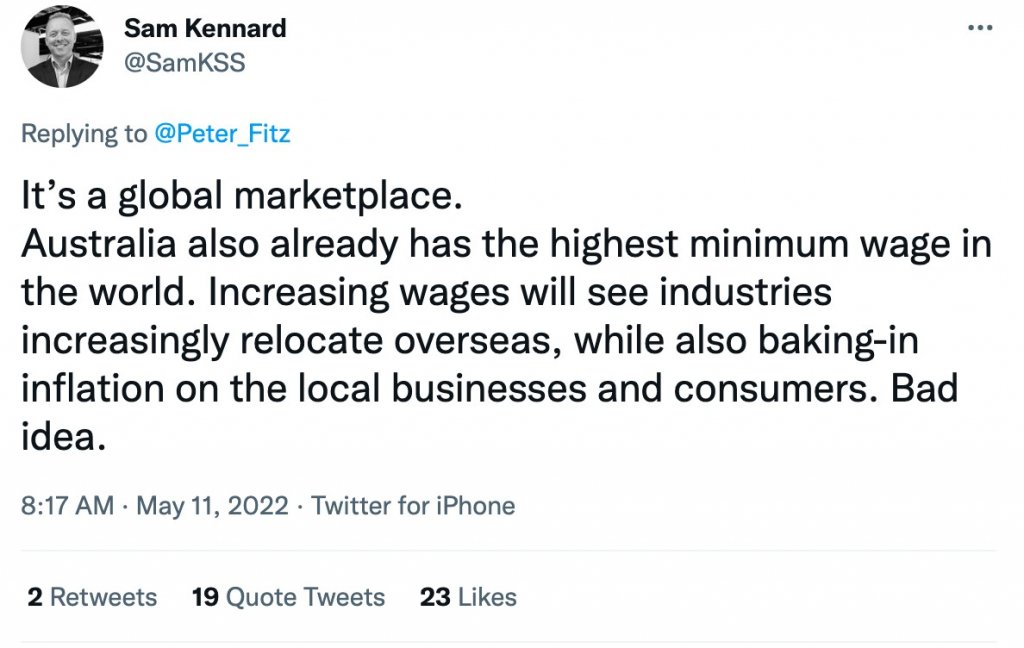 Scott Morrison, who has spent much of the campaign boasting that Australia, thanks to his government, was witnessing the most spectacular post-Covid recovery of any nation on earth, now insisted that a wage increase would bring the whole thing down.

It was like ‘throwing fuel on the fire of rising interest rates and rising cost of living’, the prime minister yodelled.

And let’s be clear here, the pay rise he—and the rest of them—were talking about amounted to—wait for it—about one dollar an hour for the lowest paid workers in the country.

A pay increase from $20.33 an hour to $21.37. An annual wage of around $41K. This was the unbearable burden the ruling class was assuring us would bring the economic roof down on our heads.

And all this at a time when the share of national income going to profits instead of wages is at an all-time high, as economist and former Labor Minister for Trade, Craig Emerson, graphically reminded us: 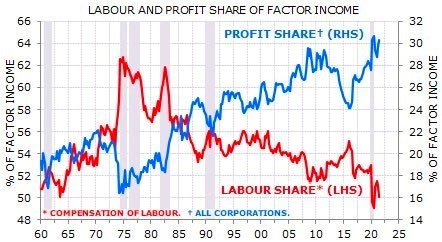 This fightback by the top-end-of-town was not unusual, but to understand it, it helps to examine the nature of what we are seeing as they circle their wagons.

And what we were seeing was the oligarchical power that sits at the heart of Australian society rising in a concerted act of self-defence.

I don’t use the word oligarchy lightly either.

Since the time of invasion, and then through the formation of the Commonwealth of Australia, the nation has been dominated by several key sectors which have remained in charge ever since, and the word oligarchy is appropriate.

In her recent book about this history, Julianne Schultz writes:

The phrase ‘culture wars’ conjures an arcane dispute between ideological opponents about matters of interpretation and understanding, but at heart there is an undeniable political economy. And in Australia, that comes from the four economic foundation stones: mining, agriculture, banking and their handmaiden, the media.

We talk a lot about the power of the media, and I have written two recent pieces (here and here) that set out what I see as key problems with that sector and the way it wields what I call soft power.

But it is more useful to see the media as one leg of a four-legged stool upon which oligarchical power rests, ‘mining, agriculture, banking and their handmaiden, the media’.

Every time something comes along that challenges the underlying and often invisible power of oligarchy, a system of defences snaps effortlessly into place because they are deep defences built into the institutions of the state itself, and the oligarchs can rely upon them to do their work without them having to be set in motion by anything more than the perceived threat itself.

Schultz, for instance, notes that during the pandemic, there arose a desire amongst many to take advantage of the moment and re-imagine how we do everything from policing, to health, to aged care. People started talking about different ways of working, a flexibility that helped workers rather than employers, and a challenge to the idea that we work entirely to support an economy.

But these glimmers of hope rapidly faded.

Despite an undeniable recognition by many of the need to change some fundamental things about the country, almost the opposite happened as the automatic status-quo stabilisers kicked in.

Rather than ‘doing things differently’, Schultz writes, the whole process was undercut by the fact that ‘those with the controlling hand on Australian politics and public life were not keen on informed and nuanced discussion that might require action or disrupt the status quo’.

This happens because, particularly since John Howard, our public service and associated institutions have been loaded with ‘jobs for the boys’, appointments that bend and shape our national life in favour of the status quo, all supported by a media that stifles as much debate as it encourages and that remains, unequivocally, the voice of capital.

On the eve of this election, continuing the tradition, the Morrison Government announced up to thirty appointments of staffers and other cronies to organisations such as the Administrative Appeals Tribunal, the Productivity Commission, and the Arts Council. Even if they lose the election, they leave in place an infrastructure managed by those who will exercise power in ways that favour the LNP ideology.

Such structures ensure a continuity of oligarchical power, whoever happens to form government.

In this way the power of the oligarchs is consistent across generations, and we can see it rise up every time change threatens, and that includes at every election, and at moments as various as the response to the pandemic or this current panic about a tiny in-line-with-inflation wage rise.

Their power is real and damaging to the possibility of progressive reform, but we need to be careful not to get carried away in discussions like this. Whatever else you can say about how our country is run, it remains a democracy, and that opens the possibility for an immanent critique that makes change possible.

In other words, the domination of the oligarchs isn’t seamless, and there are instances where their power has failed them and we might be witnessing one now, not only with the possibility of Labor winning the next election, but with the added bonus of a more-than-usually diverse crossbench of smaller parties and independents.

The LNP in particular is freaking out at the rise of the ‘teal’ independents, and no wonder. They are mostly women for a start, and let’s not forget that the oligarchy is also a patriarchy.

Just as importantly, the party system and its pre-selection methods is a major tool of oligarchical control, and the Voices of candidates represent a work-around to that control. Candidates who might have once found a home within the conservative parties are standing as independents, and is there any more threatening concept to a patriarchal oligarch than an independent woman? 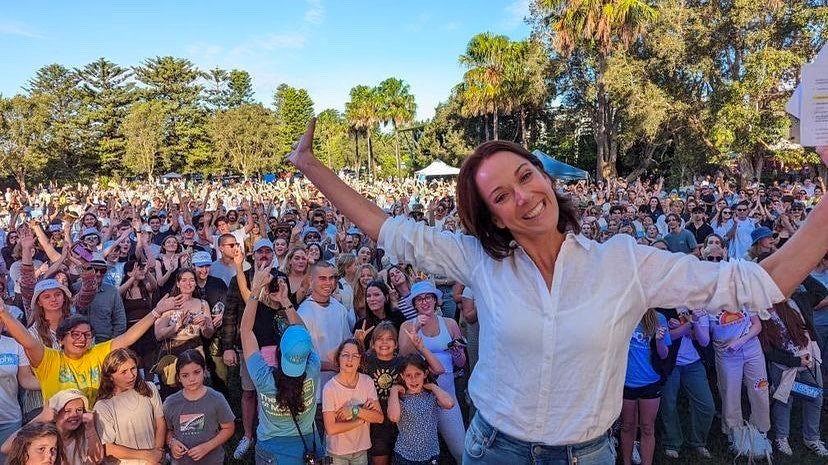 Beyond that, the argument over a national wage increase we are witnessing at the moment is a reminder that substantial power can still be mustered from outside the oligarchic ring fence, and that the Labor Party itself, despite what many would see as its own best efforts, is still sufficiently different from the Coalition, contra the oft-heard call in some progressive circles that ‘they are all the same’.

If, by chance, we end up with a Labor Government and a significant Green-and-teal crossbench—even if that crossbench doesn’t have a deciding vote—we will be a significant step along the path to major reform, and it is hard to underestimate the importance of getting action on woman’s equality, climate change, and political corruption at the institutional level provided by a parliament that represents these views.

What we learn from all this, and as I argue in my book, The Future of Everything, is that power in a democracy is best challenged from the grassroots, something the teal candidates in the leafy electorates have discovered and are using daily, to their eternal credit.

We are democracy, but oligarchical power is baked into our institutions, but we are a democracy! At the very least, recognise what a once-in-a-generation opportunity the coming election is to undermine oligarchical power, and that Labor has shown, at this late stage, they can still be a vehicle of reform.

But let’s not get carried away: as welcome as it is to see a Labor leader dig in on the need for a wage rise, what he is offering is a bare minimum. The Voices of Independents are a breath of fresh air in the body politic, but the breath blows firmly from the right of centre.

The oligarchy is the Terminator: shoot it with rockets, hit it with a truck, crush it with an industrial compressor and it morphs back into shape and continues its relentless pursuit of its own self-interest.

If you want a quick three-point plan for what to do to undermine the power of our oligarchy, it would look something like this: a republic grounded in recognition of First Peoples; a parliament that overcomes the power of the major parties and looks more like the diverse nation it represents; a media freed from the corrosive influence of moguls and managers who wield their soft power in the name of the few and not the many.

Change is possible, and it is predicated on getting people onside every step of the way by talking to them where they live and where they work, and that means developing the sort of grassroots organisations that can take on that heavy work.

Same as it ever was.