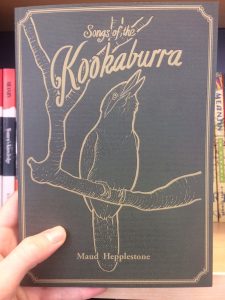 For the month of June any new Meanjin print subscription or print renewal comes with an added bonus: a classic – and controversial – volume from the lost history of Australian letters.

We are reprinting Maud Hepplestone’s Songs Of The Kookaburra, a vanished treasure brought back to public attention in our June edition, thanks to author Ryan O’Neill.

Read all about Ryan’s discovery, the extraordinary story of Songs Of The Kookaburra here.

A lost classic of bush poetry in the tradition of Paterson, or a breakthrough gesture in literary modernism? You be the judge.

Upon its publication, Hepplestone’s collection was seized upon by experimental poets as a brilliant subversion of bush poetry, and a demonstration of the form’s exhaustion; there was literally nothing left to say about billies and billabongs and stockmen. Banjo Paterson was furious with Hepplestone, convinced that Songs of the Kookaburra was a deliberate attempt to insult him and his craft. Hepplestone received an angry letter from Paterson in Paris on the same day that a laudatory review of Songs of the Kookaburra by Ezra Pound appeared in the Transatlantic Review. It was in vain for Hepplestone to protest to Paterson and Pound that she was a traditional poet of the bush and that this was all a misunderstanding. Throughout the 1930s Songs of the Kookaburra was praised, decried, admired, despised, annotated and even, on one occasion, burned, the scandal only receding with the advent of the Ern Malley affair in 1943. A mortified Hepplestone never returned to Australia and, as far as I can ascertain, never wrote another poem.

Print subscriptions are just $80 for four issues (a $20 saving from the retail price) delivered to your door.