This is an edited extract from Gularabulu: Stories from the West Kimberley by Paddy Roe, edited by Stephen Muecke, published November 2016 by UWA Publishing.

Paddy Roe is celebrated as a storyteller in the great tradition of literature on the Australian continent, where each of the two hundred or so language families has its traditions of oral literature that go back many millennia. But what is generally recognised as ‘Australian literature’ is a recent branch of written English literature brought in by the colonists. So while Indigenous communities have maintained their ancient heritage in various types of song, performances, and epic narratives, it is overlaid by this new thin layer. Many Indigenous artists of the word continue their oral traditions as best they can under conditions of continued occupation of their lands, while others, educated in white schools, have taken up writing in English and making an impact in Australian literature.

The murmur of one of those great traditions has continued to sing through Paddy Roe, a Nyigina man from Broome in Western Australia. He has recomposed these stories beautifully in English, taking up the challenges of a rapidly-changing world. Born in about 1912, he had seen the colonisers taking over his country, and his people losing direction and hope. So not only did he begin to guide his people by telling these stories, but he took the next step of getting me to write them down to reach an even wider audience.

Colonisation came a bit later to North-West Australia. At the end of the 19th century, people saw the newcomers arrive with their own animals and technologies, and aggressively impose them. They had their own stories to tell, and one was about modernisation and the power of the written word. They assumed oral literature and the experiences it recorded, some going back thousands of years, was weak and on the point of disappearance. They were not aware of the volume of material – hundreds of stories, songs and performances in every community, many of them now lost. They assumed, as they had in Europe, that ancient legends and superstitions would have to give way to modernity, even as they celebrated the myths of the ancient Greeks, continued to worship their Christian god, and – here’s the main paradox – continued to cherish most the values they had learnt in the intimacy and warmth of family and friends, values always expressed and transmitted orally.

So storytelling is not a dying art, in anybody’s language. But in traditional Aboriginal societies it had more jobs to do. Knowledge was not extracted from experience and put on the shelf in books, it had to be maintained by telling the stories over and over, often in conjunction with work, like making a boomerang. This is why you will see sounds like ‘rasping’ indicated in the stories here, as Paddy makes an ancient artifact with new tools. Storytelling patterns rise and fall with the rhythmic breathing of the body, and with the to and fro movements of working arms. Listeners chip in with a phrase or two; laughter regularly punctuates the narration, and this pleasure is our reward for following the storyteller as he takes us on his errant pathways.

A maban and two young men are living in an outcamp. The young men try to shoot brolga as they come to drink at the trough. The maban tells them not to. The maban leaves and the young men lie in wait for a brolga. A brolga comes and they shoot it and take it back to camp. They cook and eat the brolga.

The maban comes back and tells them that they will get sick. The men get sick and the maban cures them.

The maban reveals that he had changed himself into the brolga.

Yeah –
I can tell story, that whatname (rasping) you know —
that two –
man? —
you know that —
Lardi Lardi — that man —
they used to camp in Anna Plains, station you know –
he had two, mate belongta him too –
in the outcamp –
and these two boy used to go alia time days ‘n’ days you
know –
eeevery day they trouble these, brolga –
brolga —
the bird want to come for drink (stops rasping) –
but (laughs) they humbug all the time you know2 –
they go there (tap tap) –
they had shotgun too –
you know from boss –
boss used to give them shotgun to kill bullock er, oh
anything kangaroo3—
(tap tap, rasping) —
so this old fella —
see he said to these two young fellas –
oh good friend old, friend (laugh) —
he used to tell them ‘Don’t humbug these birds let-em
come for drink’ –
you know (rasping stops, tap tap) —
they couldn’t get chance to come in for drink (rasping
starts) —
so one day — (rasping stops)
this old man he went –
he went bush –
’nother place (tap tap) not very far –
jus’ walkin’ round –
an’ he left these two blokes, behind they waiting for —
for this brolga –
they made shade this time in the trough —
all right —
this old fella went bush –
all right an’ when they look hello they see one brolga
coming –
one, ooh straight-up –
jus’ lookin’ round you know what kine Brolga he’s
looking this way that way he’s coming straight for
well4 –
straight for the trough –
an’ when they come close to the trough he jus’ stand up
straight –
right alongside –
an’ this two bloke gettin’ ready with the gun –
with the shotgun you know –
BANG got ‘im knock ’im down –
’nother bloke run pick-im up –
pick-im up take-im back home (rasping starts) —
they know –
they can tell if he’s fat or skinny –
you know they open his –
(rasping stops) wing you know like this they feel ooh they
can see that big lump here you know his fat –
(clap) oooh proper fat –
all right they say –
well we only got one they say –
‘Before that oldman come you better clean-im up an’
we’ll cook-im an’ have a feed’ (laughs) –
this two bloke –
before that oldman come –
this nearly, oh long way yet time for ’im he won’t be back
yet –
‘So we’ll have to clean’ they clean-im up make re
everything make hole for ’im
everything finish –
all right when they, when they finish –
when they finish –
then they –
to pull-im out from fire –
tupella start to eat-im now –
ooh big feed, fat –
ooh very fat –
they eat-im (rasping) aaaall up –
nothing left –
they eat the lot –
an’ they couldn’t leave-im because he’s too fat –
they didn’t want to leave-im for the oldfella too –
I dunno what made them –
to think –
because they can – (rasping stops)
one brolga is not enough for, lotta people you know –
they want to get a good feed two man –
so they did ——-
yeah –

so that oldfella come back —
mmm ‘Did you fella get any, anything?’ –
‘Yeah we got one’ –
‘Where that thing now?’ –
‘Oh finish, we bin finish-im’ –
‘Ohhh mus’ be fat eh?’ –
‘Yes yes oh yes’ they tell-im –
‘We thought you not goin’ to come back you know –
we thought you gone to station Anna Plain –
come little bit late eh?’ –
‘Yes’ –
‘Ahh’ –
‘Ah well tha’s right then’ he say (laugh) –
so when they finish –
(rasping starts) –
‘All right’ he said –
‘Mm, he fat eh?’-
‘Yeah’ –
‘Ahh –
I think you tupella might get sick soon’ (rasping stops) say –
‘He be too fat you know –
might be you tupella get sick soon’ –
‘Yeah?’-
‘Yeah’-
‘Ah-
oh well, too late now we bin eat-im’ (laughs) –
’nother fella o now straight away –
they start to spew you know –
eeeegh eeeegh ’nother fella –
’nother one gone again straight up beeeegheeegh one fella
there eeegheeeeeeeegh shit come out he go bbbbbbbbbbb
>(laughter) –
eeeeeeaaagh bbbbbbbbb everything come out one time same
time everything come out, you know –
two of them –
same –
oooh they bin, musta spew about five times ‘till nothing
left inside that thing I s’pose they mighta spew
everything out –
but that fat too, made-im come this end (laughs) –
so ’nother fella start again this side you know beeeeeeegh
bbbbbbbbb (laughter)
’nother one again eeeeeeagh bbbbbbbb –
ahh finish he say ‘Oh, that old fella coming –
oh you better see us’ –
he’s maban too that man oh proper maban –
‘You better see us’ –
‘All right’ he tell-im ‘We got a whatname here –
you better –
have a look at us must be something wrong’ –
‘Yeah –
yeah’ he say –
come up he rubbed these two fella you know5–
oh finish they stop now no more –
nobody spew now finish –
stop –
oh everything stop-im everything one time –
maban man that fella too –
Lardi Lardi –
‘All right’ he tell-im ‘well –
yeah –
you tupella right now?’ he ask-em –
‘Yeah we all right –
yeah’ –
‘You know what yupella bin eating?’ –
‘No —
oh yes’ they say ‘Yeah we bin eat that, bird –
yeah –
yeah’ –
‘You tupella reckon that’s that bird yupella bin eating?’ –
‘Yeah’-
‘Well that’s me’ he tell-im (laughs) –
you know –
‘You tupella bin humbuggin’ round all the time in that
trough –
these birds never come for drink you know, hunt-im out
all time –
yeah —
I only bin jus’ play-play with you tupella you know’ he
say –
and tha’s –
‘We bin eat YOU?’ they bin tell-im –
‘YEAH, I bin turn meself into whatname –
ah brolga gurdurwayin’ you know we say gurdurwayin –
‘that’s me’ –
‘Ahhh’ Oh they know-im too oh everybody know him –
this oldfella he’s a proper maban too –
this man –
so that’s the finish you know –
Lardi Lardi –
(rasping) 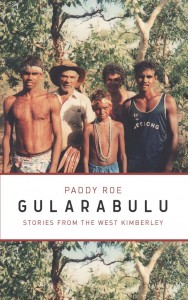