There are two things you can say about the recent federal election.

The first is that the biased right wing media lied about Labor and campaigned relentlessly for ScoMo, while the more progressive media failed utterly to do its job in holding the Coalition to account and exposing the lies.

The second is that the biased left wing media campaigned for the radical class warrior Labor Party and attempted to foist it onto an unsuspecting public, but the more centrist and sensible media exposed the truth, asked the tough questions, and won out in the end.

These stories have their echoes internationally.

I am sick of hearing both these stories. Partly, I am sick of being told I have to pick a team and wear a scarf, as if life were a never-ending game of football with only two teams, no umpires and a set of rules that are never quite agreed upon. Partly, I am sick of the way it requires every single event in public life to be painted as either setting us on the path to glory or leaving us on the brink of disaster (sometimes both at the same time), and consensus or agreement is seen as weakness—the equivalent of failing to contest the ball. But mostly, I am sick of it because it puts journalists in the role of players on the field, having to decide which side they are on and then taking responsibility for scoring the goals. Meanwhile, everyone else gets to sit in the stand barracking.

So enough. Game over. I am hereby unilaterally declaring a new approach.

Journalists: stand down. Back to the sheds, I need to speak to you all. You now have a new job, or to be more accurate: an old job.

First of all, though, some pre-reading. 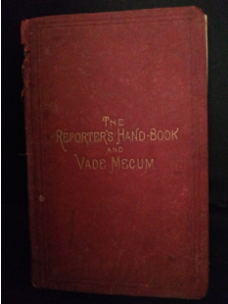 I refer you to The Reporter’s Handbook and Vade Mecum, a slim volume with gold lettering embossed on fading red cloth, published in 1884 by ‘a reporter experienced on weekly and daily newspaper, affording comprehensive instructions for reporting all kinds of events.’

Now, some among you may consider this volume to be a little out of date, and I confess it does precede not only the internet but also television and even radio. And it is also true that it dwells a little overmuch on how to cover the most likely stories reporters would encounter in the late 19th century, hence the advice on questions to ask when covering foxhunting (where was the fox put up, and what direction did he take?), an otter hunt (names of the leading persons present), eisteddfodau (Is the President a bard?) and yeoman cavalry inspections (are the horses of uniform colour, size and general appearance?).

But towards the end, in a short section entitled Hints to Young Reporters, the author advises that promptness, punctuality, impartiality and accuracy are the golden rules, and that ‘the reporter’s primary qualifications comprise a sound mind in a sound body; a good English education, combined with some knowledge of, at least, the Latin and French language; ability to write shorthand at the rate of not less than 130 words per minute; and an active physical and mental temperament.’

I don’t expect you all to hunt down and read a 135 year old book, so I have taken the liberty of doing that for you. Based on its advice, and taking into account one or two developments that have occurred in the world since then, I have created five new rules that will apply with immediate effect for all journalists. Pens ready? Then let’s go.

You are no longer a journalist

Sounds drastic, I know, but it’s just a name change. You are now a reporter. This matters. Journalism is a vague and broad category that covers everyone from the chronicler of the day’s events to the reviewer of sports and television programs, from the humorous essayist to the pompous blowhard on our airwaves. Reporting, on the other hand, is a plain and honourable craft, informed by the simple rules of accurate and fair reporting of facts and context. It is a discipline that is easily learned and easily practised. Don’t believe what those post-modernist academics tell you about objective reporting being a naïve myth. I expect my postman, my policeman, my teacher and my magistrate to be capable of making decisions fairly and based on the facts, setting aside any views they may hold. What’s so special about reporters that they can’t do that too? I don’t need you to be perfect at it, just give it a go. It’s really not that hard, I promise.

That’s right, people. No by-lines in newspaper or online stories, no pieces-to-camera in television news. Not for the first 20 years of your career. This maybe something of a blow, but it is the way things used to be, and for good reason. It’s not about accountability—the organisation you work for knows who you are and will remain fully accountable for what you write. It’s about the accuracy and integrity of your work standing on its own two feet. The Economist, one of the most respected news publications in the world, has been largely alone in keeping the ‘no by-line’ tradition alive. In a piece written several years ago to mark the 170th anniversary of the magazine, the editor explained why most of their stories always have been and always will be anonymous: ‘The main reason for anonymity…is a belief that what is written is more important than who writes it.’

In the current celebrity-saturated world we live in, that almost sounds like heresy, but it reinforces a really important notion. If the kind of information journalism can deliver is reliable, fact-based and represents a dispassionate analysis of the evidence, then it has a strength and a value that is not dependent on the person who wrote it and what views they may happen to hold. So no by-line for you. Once you have clocked up 20 years in the trade, we can talk.

This is not really about reading up on the subject you are writing about, either. I want reporters who have not just done the hard yards and soaked up as much information as possible about the issue they are covering but about the world in general. The good news, therefore, is that all reading counts—novels, articles, annual reports, comics, spread sheets, cereal boxes —and it is retrospective and cumulative. So if, as a child, you were a voracious reader, then you have provided yourself a pretty good foundation when you kick off your work as a reporter.

But while I don’t propose to set any rules about the quality of what you read, I would nevertheless urge you to consider the advice in The Reporter’s Handbook and Vade Mecum, which recommends that a reporter  ‘should be a diligent reader of history’, should also spend some time with biographies and poetry and, while reading the standard novelists like Scott, Dickens and George Eliot is to be encouraged, ‘trashy tales of an inferior order he would do well to leave alone…as their perusal involves a sad waste of time.’

I am talking now about your next story.

Robert Redford and Dustin Hoffman have a lot to answer for. While it is difficult to pinpoint precisely when journalism got too big for its boots, when you cast two Hollywood heartthrobs as real-life crusading journalists, you are just asking for trouble. Until All the President’s Men came along, journalists in books and movies were mostly flawed, fictional ‘working stiffs’. Think of Hildy Johnson in The Front Page  (brilliantly transformed in the later and better His Girl Friday) or Humphrey Bogart’s turn as a disillusioned sports hack in The Harder They Fall. None of these fictional reporters were anything so fancy as ‘journalists’. They pursued a decent trade, but a trade is precisely what it was. Decent shorthand, attention to detail and a stout pair of shoes were all considered more important than flowery prose, high ideals or a desire to change the world.

But since Watergate, too many journalists sees themselves as a hero who is just one story away from bringing down a government.

The truth is that attaching the suffix ‘-gate’ to your story won’t turn it into a brilliant expose, and in the world of modern journalism the beat-up is far more common than the cover-up. So no more gates for a while, please. Just relax and focus on reporting the facts.

One day, the time may come. You have put in your twenty years as an anonymous reporter, you have read wisely and well, you have plied your trade with distinction.

Finally, you are, cautiously and on occasion, acknowledged as a person whose views might matter. You are permitted a name and a modest column or blog or video segment to demonstrate the wisdom and brilliance of your insights. You might consider that you are finally free to say whatever you want, but that would be your next mistake.

There are opinions and there are opinions. The wonderful writer and journalist Ambrose Bierce said that prejudice is ‘a vagrant opinion without visible means of support’. Based on that fine definition, most of what passes for opinion columns in the media these days could be more accurately called prejudice columns. Don’t join that crowd. Instead, show your workings.

If you want to be a professional with an opinion, then think of yourself as a surgeon or a barrister providing a professional opinion. If someone tells me I have cancer or I am going to jail, I don’t want it to be their hot take or a cheap attempt to grab my attention. I want it to be the result of years of experience and careful consideration of evidence which they are happy to provide and discuss.

There endeth the Five Golden Rules. Good luck and happy reporting. You may now put away your weapons and remove yourselves from the battlefield. You are no longer warriors in the class war; you have no partisan role to play for either side. But in case you feel irrelevant or undervalued, fear not. Information—detailed, well-researched, properly contextualised and scrupulously impartial information—is the most powerful thing anyone can use to spread a little light where there is darkness and put paid to the demagogues and the fools. So while you may not be holding the weapons, you will be producing the ammunition for the forces of good on all sides.

Alan Sunderland is an author, journalist and advocate for public interest journalism. He tweets at @asunderland