A woman wails. All among that sound, a pile of snuffling
children sleep. I see this and them. Two houses by, a pot of
tea, unwatched, gets floury and this sweet scene slips into a
purple, softening dusk.

I can see this first poem as vividly now as when it first happened to me in sodden rural suburbia. Since then, I’ve been chasing such a moment—clutching either side of that teapot as it grows cold.

My second poem was in primary school, a progression that represented growth or change. Five lines. In this poem I strained to get that moment on the page and instead found myself gazing at a precarious pile of cliché, that surely someone had cruelly switched somewhere between writing and reading! This is the frustration of language over which poetry tries to leap. I have myself convinced that I wrote it like this:

What I wrote then would be burdened by something else—that what I wrote was ‘bad poetry’. I was ashamed when I wrote the thing, condemned it to be the first of a pile of my poems that couldn’t leap over language. More crucially, it stays with me as a reminder of what is ‘bad’ in the small amount of poetry that makes that technical leap, or at least, what I was taught to believe makes a ‘bad poem’.

It’s a curious thing in my mind, ‘bad poetry’, but the meaning has changed over time for me. From the endearing fumbling of dimpled me writing on a weak, underwater memory; to pimpled me writing on the implications of that memory; pock-scarred me rewriting that little memory like a big, explanatory vector. In poetry workshops, I hear the jargon-riddled echoes of ‘bad poetry’ traced around this memory. Gendered parries spring up in its place—‘prosaic’, ‘shallow’, ‘flat’—which treat women’s writing like a cynical pulp cash-grab, or insipid self-maintenance. The racialised blows land heavier, no less patronising but certainly more accusatory – ‘opaque’, ‘didactic’, ‘plain(tive)’, ‘self-righteous’. These are all things underpinning judgements of technique, or even subtly informing those judgements—the original ‘bad poetry, weighted deeply by our perceptions of its authors and objects.

Somewhere amongst this you can find the poetry of Aboriginal women imprecisely characterised by the mess of sexism and racism—‘sentimentality’. Less the sum of gender and race, criticisms of Aboriginal women’s poetics strike deep to their poets; their contexts, their motives. In the canyon between life and national politics in Australian writing, the poetry of Aboriginal women has offered its back as a bridge (or has been co-opted into one). The late Oodgeroo Noonuccal wrote healing, soft poems for the Aboriginal girl, accusatory ones on her behalf against the white man and triumphant, tender mandates from Aunties to their people, and was disparaged for it by critics. Critics called her realist voice ‘amateurish’, her poetry ‘propagandist’.

Her work was ‘not verse’, and yet, in their mind it was verse that corrupted her authenticity as an Aboriginal woman ‘of the oral tradition’. What a double bind! An oral tradition, it appears, entirely incapable of what I think poetry purports to be: words that are more or less than the sum of their immediate, informative value. Perhaps those critics had not watched the richest verse exchanges from the perspective of a young Aboriginal girl—unfiltered, unrehearsed exchanges in yards/under houses, laden with context, rhythm and slowly unveiling surprise, furiously scratched down before they slip away. I have. They are technically and substantively exquisite.

Aboriginal women’s writing is instead relegated to the halls of ‘diversity writing’, or becomes the low-culture soil on which an Australian national identity, desperate to cheaply lose its responsibility, is built.

It is not merely that our poetry is grounded in the lived, suffered and eavesdropped; it is a devalued craft that is racialised, discontent and provocative. It makes sense, then, that the subtle body of gingerly-phrased criticism against Aboriginal women’s poetry, of which Noonuccal undoubtedly bore the public brunt, is informed by the assumption that it is a political, crude and inauthentic mess, or that well-worn epithet I hear from fellow students: ‘under-intellectualised’.

I continued to get a kick from writing ‘bad poetry’ throughout my youth and now, at my youth’s periphery. I have pages of diaries wracked with sloppy verse on crushes, family, racism, class and school—now conversations on trains, lovers, history, violence, culture, racism, sexism, pleasure, joy. And still, family, crushes, school, buses let me build a downy pile alongside these other hard things. I wrote my memoirs at eight, where I would tell them to a mirror, and little has changed since then. I have read and written Aboriginal women’s poetry that is unabashedly sentimental and in equal parts and without any contradiction, intellectual. ‘Bad poetry’ gave me the guts to write bad poetry and to see it for the fount of literature it was—in all its ‘soppy’ and ‘preachy’ parts.

I’ve written nothing else. A woman wails. 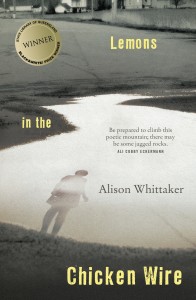 Alison Whittaker is a Gomeroi poet and essayist from the floodplain fringe of north-western New South Wales. She now lives in Sydney on Wangal land, studying and working in media law and Aboriginal women’s law and policy.

Her debut poetry collection Lemons in the Chicken Wire, winner of the State Library of Queensland’s 2015 black&write! Fellowship, is slated for release on March 1.