I sip my tea, suck up the smoky tannins, then pick up the newspaper. None of it seems ‘new’.

It is very current and capricious, yes. But a regular glance reveals common patterns. Not only the same kinds of events, nudged by the same kinds of forces, but also the same kind of language: phrases that repeat thousands of times every day. ‘Stranglehold on the…’ ‘Found safe and well.’ ‘It is alleged that…’

In this, the newspapers are children of their age. Language, noted the philosopher Martin Heidegger, can be something like public transport: a conventional utility, which is so familiar we only notice when it breaks. Heidegger’s description has a whiff of contempt to it, but words like rattling trams are a good thing: we are social animals, and everyday life requires some quantum of predictability. We cannot communicate if we cannot reliably travel from this word to that idea, impression or feeling.

This is not just about inventing new words—as if Shakespeare’s only gift to English were words like ‘assassin’, snaffled from Arabic. It is also about using old words in new ways: surprising juxtapositions, odd omissions, suggestive rhythms, and so on. In this way, writers untie the stuff of life and knot it again. As philosopher John Dewey might have put it if he weren’t disarmingly clear, we experience experience differently.

Not all good writers use language inventively—their offering to readers might be the lucidity of their ethics, or boldness of their stories. George Orwell comes to mind. But some of the finest authors combine intelligence and wisdom (of a stripe) with a feel for rejuvenated words; words given some verve by new company. They can refresh or revise our comprehension.

Take the poet George Szirtes. I first noticed the prize-winning author after the 2011 riots in London. His poem ‘Children of Albion’ took the ancient words for Britons and cut them into contemporary scenes of violence and covetousness:

It’s not only the surprise of old and new; the shock of utopian pasts splintered by the very real present. It’s also the simple rhythm: like a children’s nursery rhyme. The mood is of innocence or naivety overturned by fact—in other words, of disillusionment.

But more compelling still is Szirtes’ recent book Langoustine: fragments of a philosophical marine romance. By telling you the protagonists are a crab (a doctor) and a lobster, Langoustine, I’m saying very little about the world the author affords. It’s a series of absurd, suggestive and often very funny aphorisms, which sometimes become part of a story—and sometimes suggest some surreal idea or mood.

‘When the doctor woke his mouth was full of water,’ writes Szirtes. ‘The trouble with sleeping was that you woke to the sea as if the sea were real.’ The physician crab is in the sea—he’s a crab. But he is also in a poem. And his sleep seems to take him out of his world, the poem. Perhaps his dreams are real? One point of the poem, and Szirtes’ aphorisms in general, is that these paint-by-numbers visions of truth and falsity are dubious. For all their fantastic, fable-like atmosphere, these poems evoke much of the half-lit bafflement of life. They are, in other words, true to our ambiguities and contradictions. (Assuming we’ve the courage to admit them.)

Another line: ‘There was only so much hard-bitten dialogue the doctor could stand. Inwardly he began a villanelle about silk and oranges.’ This is a crab, but a melancholic, sensitive one. Dry and curt in conversation, he composes gentle ballads to himself. A parable about masculinity? A warning about literary narcissism? Just a funny picture of a complicated crustacean? I’ve no idea, but Szirtes invites curiosity, and makes the words matter.

Less than twenty pages, Szirtes’ Langoustine is poetry at its most playful and inventive. Like haiku, the miniature suggests a world. The words are familiar: the trains and trams of Heidegger’s public transport. But at some point we leave the docks and ride some spiny chimera to Cromer Pier, in Norfolk. My tea tastes better by the seaside. 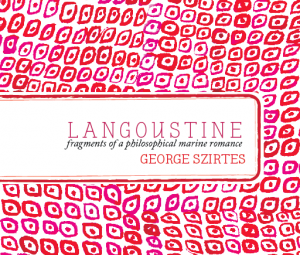