When I was twelve years younger and searching for the right combination of words by which to define myself, I used to rip poems out of library books and Blu-Tack them to objects and surfaces in my daily orbit. Tacked to my laptop was a quote by Konstantin Batyushkov, taken from a poem by David Kirby:

you are stronger than reason’s sad memory

And on the inside of a desk drawer, immediately visible whenever the drawer was opened, was a tanka by Yosano Akiko:

that hand of hers

her hair soft and fine

I had a wallet with a window for displaying ID cards and photos that held E. E. Cummings’s poem about ‘Buffalo Bill’, which was eventually worn illegible by the stud of the coin purse:

and what i want to know is

To discover and claim a poem like this was, for me, an act of devotion. I was enamoured by the transformative thrill that reading could provide, the coalescence of words and thoughts that lead to what Grace Paley describes as a thickening of self. I thought of certain poems and turns of phrase as talismans that would allow me to express the same sorts of concepts and cadences that I found so thrilling and powerful, if I only held them close enough.

Looking back, I can see that to rip a poem out of a book that I didn’t own, to absorb a piece of public property into private orbit (and to get away with it!), was to exert what little power I felt that I had as a secretive, half-formed thing. I recognised myself without irony in the unravelling narrator of Chloe Hooper’s A Child’s Book of True Crime, who writes: ‘Everyone should have one great secret to carry round as a talisman. Then, when people look at you, thinking she’s like this, or she’s only this, they’ll always be wrong.’ It wasn’t until much later that I thought to use a photocopier.

Over time I’ve become less preoccupied with the search for poem-ikons to worship in the hope that they will make me a more interesting or complete person. I’ve internalised a few couplets, such as Henry David Thoreau’s ‘My life has been the poem I would have writ / But I could not both live and utter it,’ which I occasionally mutter to myself as if reciting a charm or looping a prayer bead. My subconscious has become a reservoir of insights from books that surface without my choosing; sometimes I find my inner monologue fixated on a half-remembered sentence. As we head towards a winter of mass introspection, I’ve found myself thinking more and more about a paragraph from Kurt Vonnegut’s A Man Without A Country:

When a couple has an argument, they may think it’s about money or power or sex, or how to raise the kids, or whatever. What they’re really saying to each other, though, without realizing it, is this: ‘You are not enough people!’

I still believe that, as with any form of art making, to read well is to write well (Gerard Manley-Hopkins: ‘What you look hard at seems to look hard at you’), but I no longer read like a bowerbird searching for treasures with which to adorn my nest. Not that I’ve stopped taking notes; I’m just less clear-eyed about the effect that certain combinations of words will have on my sense of self and more concerned about how and why to retain them.

I read with a pencil. Unlike the friend who taught me the habit, I’m not an analytical reader. All of my underlines and annotations are made intuitively. Once I’ve finished a book, I search through its pages for the sentences and paragraphs that have caused me to laugh or nod or pause or thrum or melt. I write a selection of these in a journal that also serves as a notebook of ideas for my own stories and poems and songs. I do the same for online articles, copying and pasting quotes into a text file before recording them with pen and paper. This then forms the lasting impression of what I’ve read, and it occupies the same space (in mind and on paper) as what I’m yet to write.

There are plenty of quotes about the joys and benefits of reading and writing, many of which I find seductive and heart-wrenching because they’ve been written by writers who are unable to separate who they are from what they’ve read and written. But reading is also a means by which to interact with voices and histories and truths and modes of telling and understanding that differ from our own. Reading is an exercise in empathy—a means of both confirming and challenging our assumptions, of consolidating and diversifying our worldview. As Edward Hirsch explains:

Reading poetry has helped deliver me to myself. It has given me a language for experience—not just my own experience but also the experience of others. I wouldn’t recognize myself without being able to read and reread poetry. That’s why I’m sure it can be so determining. Reading is both private and social … I recommend this sustaining way of being alone with others.

If I am my writing and what I read is what I write, then I cannot wholly separate what I read from who I am. Perhaps then I’m still a bowerbird in search of words to build a nest, only one that is held together by my own words rather than with pages torn from books.

Still, remnants of my old ways remain. Let me show you around my kitchen. Tacked inside the cupboard that holds coffee and tea, a poem by Tomas Transtömer titled ‘Espresso’ (‘It is a precious sip we intercept / Filled with the same strength as Yes and No’). Beneath a fridge magnet, a picture of Humphrey Bogart and Lauren Bacall eating breakfast, torn from a copy of Katharine Hepburn’s The Making of the African Queen, or: How I Went to Africa with Bogart, Bacall and Huston and Almost Lost My Mind. Found discarded on a suburban street in Seattle, complete with caption, it’s a poem unto itself: 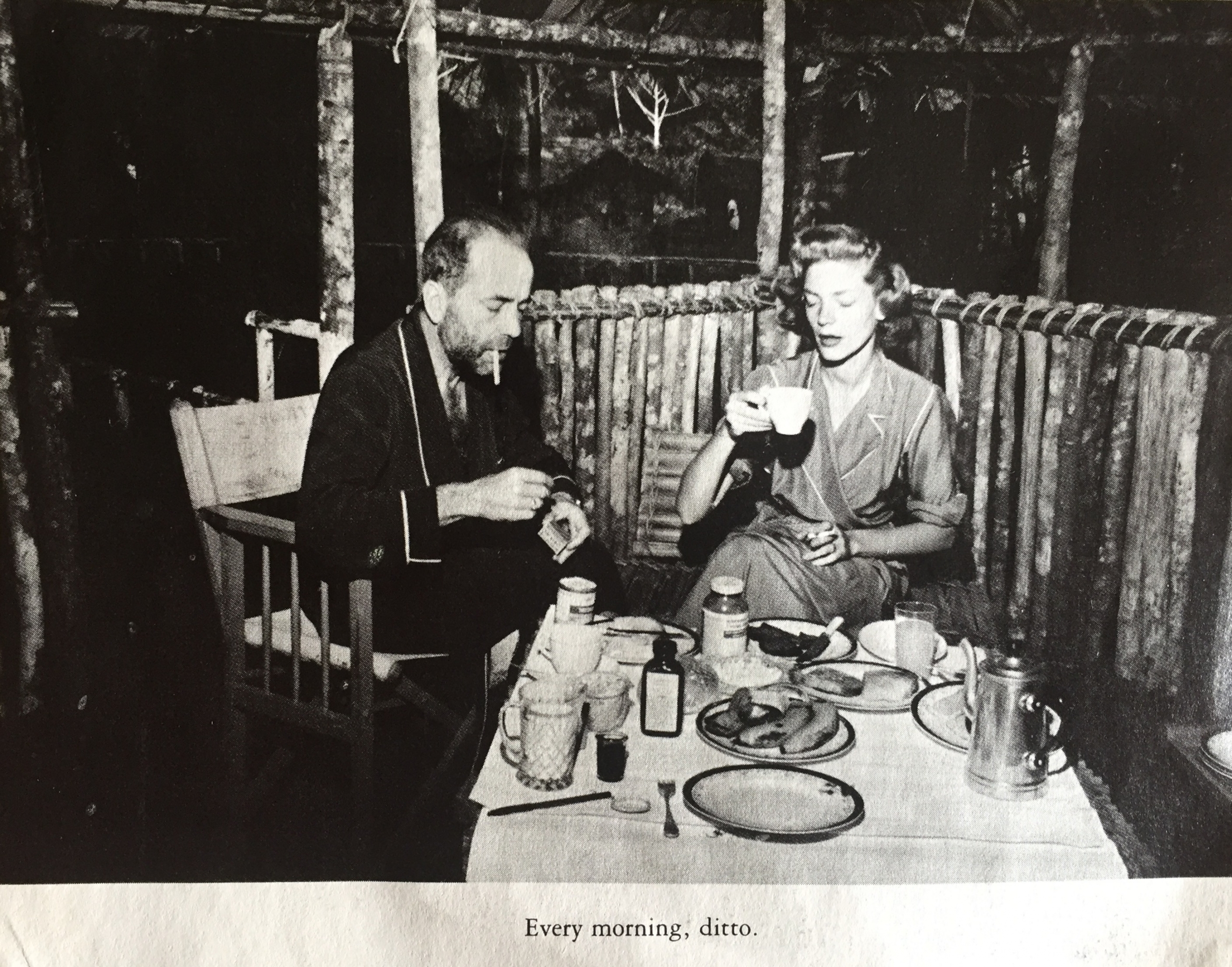 Oliver Mestitz makes music as The Finks. He lives and works on the stolen land of the Wurundjeri people of the Kulin Nation. His story ‘Public Transport in Macadamia’ was published in the recent Meanjin Summer Edition.