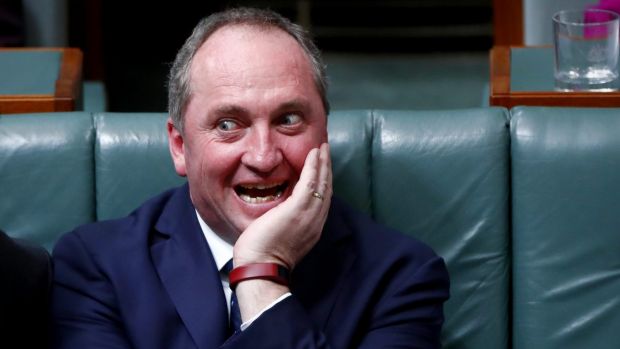 The function of these celebrities is to act out various lifestyles or sociopolitical viewpoints in a full, totally free manner…
—Guy Debord, Society of the Spectacle, thesis 60.

Like a golfer hitting a hole-in-one, a footballer bending a miracle goal through the posts, or a basketballer driving the lane to slam-dunk, Sydney’s Daily Telegraph has run every tabloid’s most sought-after yarn: Member of Parliament, extramarital affair, pregnant staffer, shock, shame.

Sharri Markson’s and Kylar Loussikian’s scoop, that Deputy Prime Minister Barnaby Joyce is to be the father of a child by his former staffer, outside his long-term marriage, with a pregnant-belly photograph to go on the front page, is a real Holt Street Special. It’s the kind of once-in-a-career shot that’s going to be boasted about for years, every retelling blowing the froth off celebratory beers at the Aurora Hotel.

It’s hard to sympathise with Joyce. He is, nearly everyone agrees, a buffoon, the caricature of a red-faced philistine bagman only half aware of his own joke, the kind of man who opposed same-sex marriage on the grounds that it might affect cattle exports. The kind of conservative who campaigned for the ‘traditional view’ of marriage, and abstained from the final Parliamentary vote on the delightfully circular grounds that he ‘didn’t want to look like a hypocrite’, is by now a tedious punchline in Western politics: it’s not extraordinary hypocrisy, hypocrisy is just, as the ancient joke goes, the usual state of affairs.

What’s new here, or in the public interest?

What is it particularly that matters?

The culture of Parliament and media seethes on intimacy and confidences. They  drink together, they jog together, play touch football, share housing, employ each other, and trade information for status. They know who’s an alcoholic, who gambles, who’s slept with who. They are almost uniquely unqualified, as observer-participants, to comment about each others’ moral deficiencies and failings. 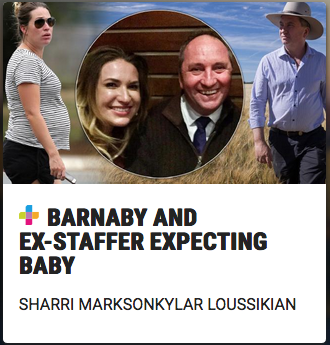 Sharri Markson, one of the journalists who wrote the story on Joyce, tweeted the power relationship as one of unbreakable mutual confidence (discussing the ethics of leaking and ‘dumping’, in October 2017):

‘And that’s why you lot will never get a cabinet leak. There are no conditions on source protection.’

And this is key. For every story like this that is published, others are not published, by way of maintaining working relationships.

And other comparable stories are worth remembering. In 2010, the NSW Minister for Transport, David Campbell, was outed by Channel 9’s journalist, Adam Walters, with telephoto video of him leaving an eastern suburbs sex club. Walters’ ‘public interest’ justification, and for asking whether the Minister was going to resign, was that the closet might have invited blackmail; once again, a completely circular reasoning about a story that led to the Minister’s resignation, and then retirement. (To keep the circle going, Walters may have been alerted to the story by way of gossip, having worked as a NSW Labor adviser).

From 2010 to 2013, former Prime Minister Julia Gillard faced constant innuendo about her childlessness, and her past relationships; Senator Bill Heffernan’s remarkable phrase ‘deliberately barren’ remains a low point in Australian parliamentary debate. The opposition and press gallery during Gillard’s Prime Ministership distinguished themselves by a creepy fixation on the symbolism of her (in fact, unremarkable) private life, over and in preference to the actions of her Government.

What 2GB and News Ltd might have published had she been in a personal situation comparable to Barnaby Joyce’s is worth imagining.

We routinely reduce political actors, just as any celebrities, to the moral symbolism about their lives—just as even Caesar’s wife had to be beyond suspicion. It’s particularly true when those actors themselves weaponise virtue, and when moral questions get debated, for instance in 2017, about what a marriage is. This doesn’t mean we haven’t also accepted, at some open or unspoken level, that the people acting out these public lives are also humans, and like the rest of us, fail in human ways, make good and bad decisions, and never reach the standards we set for ourselves.

Who’s to be judge of the guilt or innocence of other people’s personal lives? Is it the Canberra Press Gallery?

Liam Hogan is a Sydney based heritage researcher and was a former adviser to the NSW Labor Government.