The Vogel Literary Award is a manuscript prize open to writers under 35 years of age which includes publication by Allen and Unwin and $20,000 prize money. It is the only Australian prize for an unpublished work. 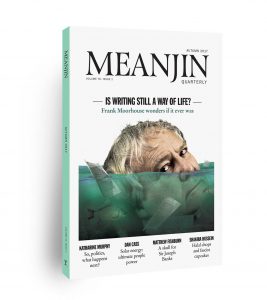 The award was initiated in 1979 by Niels Stevns, founder of the company which makes Vogel bread, and is a collaboration between the publisher Allen & Unwin, and Stevns. The award is named in honour of the Swiss naturopath, Alfred Vogel.

The award has launched the careers of some of the country’s most successful novelists.

When I went over the list of the eleven winners on whom I had focused, I found that three seemed to have dropped out of sight as writers—Norman Angel, 2003, and Andrew O’Connor, 2005. Chris Matthews who was co-winner in 1981 with Tim Winton, with his spy novel Al Jazzar went on to be a professional watercolour artist. His work has been exhibited at Middle Eastern festivals in Australia and has won art awards.

I want to say how gratified I was and often touched by the generous and often heart-felt responses of the writers to my questions. I found the different vocabulary-sets used by the respondents interesting.

First, I looked at what three recent winners of the prize said about the life of writing in newspaper interviews done at the time they were awarded the prize. In their questions the interviewers also reveal something of how they see the life of imaginative writing.

Overall, the responses seem to confirm what the Paris Review interviews taught me as a young writer:

I chuckled at times at the responses (and on re-reading my essay) thinking they sometimes confirm the old saying about writers, ‘every writer secretly believes that they alone are the only true writer’.

Some classical ideas about art recur in the responses—a concept of the life of the artist, not necessarily bohemian although that is there; about how that should be pursued; but most of all, the desperate need for time, space in life, to achieve it. As I quoted Karen Blixen (Babette’s Feast and Other Anecdotes of Destiny) in my essay, ‘Through all the world there goes one long cry from the heart of the artist: Give me a chance to do my best.’ .

There is also regret in many that to have a family it was necessary to forgo the full-time writing life. They echo the rather glib statement by Cyril Connolly, ‘…there is no more sombre enemy of good art than the pram in the hallway’.

I found Danielle Wood’s—winner 2002—responses on this dilemma very moving.

Danielle rephrases Connolly, ‘Once, women paid for their offspring in teeth. But women writers, I was told, back when I could still have chosen differently, have their own currency. Two novels, you sacrifice, for every babe you hold in your arms.’

I consciously decided not to be a father partly because I was aware as a young writer, that I might not be able to meet the financial obligations of parenthood, but more than that, I had an emotionally cold, unhappy, childhood and I felt I would not be adequate at parenting.  However, I have had the joy of being something of a stepfather three times, living domestically with children– once for a number of years. But in none of these relationships did I have financial responsibility while having care and responsibility and emotional commitment, even if there was no blood-bond.

I think that in redesigning arts funding this dilemma—to have to choose between one’s art and having a family—should be addressed.

The responses from the writers also revealed that in the absence in most cases of any superannuation, ageing in the arts should be considered, regardless that many artists go on productively well into old age. When I began writing there was a Literary Pension scheme, changed to Emeritus Writers’ Fund, run by the then Literature Board, begun in 1908. It was abolished in 2000. Gail Cork, from the Literature Board, said, ‘We see elderly eminent writers die in poverty and it’s shocking that this country can’t sustain writers of this calibre.’

Adam Gopnik (I quote Gopnik with reservation) in a recent review of a book on Montaigne in the New Yorker writes of the 16th century notion of the arts being an aristocracy because it was a withdrawal from the life of commerce and wage earning. I have discovered something of this aristocratic attitude in the arts, and, perhaps, in myself. There is a reason for it which I have glanced at in my essay. But the life of the writer has within it a paradox: to know oneself and this world one must engage with it in some ways. Montaigne involved himself in judicial work and in local government as a mayor of Bordeaux. He also came from a commercial family.

The biggest absence in Australian fiction is the serious treatment of the life of entrepreneurship and the dynamics of business life.

Only two respondents referred to alcohol—Brian Castro has given it up and Danielle Wood hasn’t taken up absinthe although tempted—none referred to drugs. For a time (for too long in some cases) some of us had the misconception that alcohol and drugs were necessary for the writing life, as a way of breaking out of the conventions of our mind.

Writing can also involve a form of noble-self harm—the writer says, I need to punish my body by heroic neglect of nutrition, sleep, and by use of drink and drugs, the ignoring of my relationships, and the fatiguing of myself to a state of mental breakdown. Perhaps inescapably, some degree of massive absorption with the work and self-withdrawal is necessary and intense writing can be hugely stressful, failure and the fear of failure, can be tormenting. Quite a few writers have found that alcohol or drugs can be a way of coming down from an intense writing day—very few find it of any help in writing itself. Some find better ways of relieving the stress. I find alcohol useful in the reading of work in progress—not in the writing. If there are deformations in the writing personality, as say suggested by Nigel Krauth, there must also be a distinction between the deformations of the personality by genetics and conditioning, aside from any deformation which comes from pursuing the writing life.

The other big question which comes from the Vogel winners is the role of the university in making of the writer and as a way of employing writers.

A lecturer in creative writing at Griffith University and novelist, Dr Sally Breen, sent me a video about the writing/teaching life. She said, ‘Here’s a video one of my students Tim Thomas made about writing process—it features myself my colleagues Stuart Cooke and Anthony Lawrence—interesting how we differ and how we agree. Mostly we are bitching about the university cage ha! And how to rescue your life/creativity. So there are students like Tim who are very intrigued by all of this. As part of this project Tim actually took on some of the advice and tested it and in the end the result was okay—perhaps he didn’t push it far enough.’ See https://youtu.be/lrd-zmILCD0  T.Thomas. Advanced Project. Griffith University. 2016

In 2004, I surveyed those writers I accepted for Best Australian Stories and 15 of the 25 writers had done a writing course. Of these, three said it was of no value and one said the course had been of qualified value. One said it had been harmful and another said it had only been a way to meet other writers. Among the contributors were two high school dropouts.

The Australia Council Report on the Arts Economy 2003 found that writers nominating ‘self-taught’ or ‘learning on job’ as the most important part of their development accounted for 52% of the writers surveyed.

Of the seven Vogel winners who have gone on to be writers, three—Brian Castro, Kate Grenville, and Tim Winton spend most of their lives as full-time writers—although Brian Castro has become an academic only recently. I will say again that many writers do not wish to write full-time and some of the respondents say how they feel happier when they are more engaged with the world and feel it might be necessary to their writing.

What I suppose I would’ve lost had I not written full-time would’ve have been the single-minded involvement in my writing—the privilege to write what one wants to write when one wishes to write it, in a way he or she wishes to write, and to spend most of one’s time doing it at one’s own pace. To wake up in the morning when one wants to, wishing to do nothing else that day, but write (well, give or take a couple of other things which come to mind) and being able to do just that. The only time I experienced the university teaching life was when I was Visiting Professor for a semester at the University of Texas in Austin. I found I needed to decide right from the start whether to try to write while teaching. I decided that to get all I could from my time there I should devote all my energies to the students (including socialising). The teaching seemed to demand it. It was, for one semester, very fulfilling.

Leaving aside Brian Castro, three of the Vogel winners are employed by universities as teachers of writing—only Julienne van Loon and Nigel Krauth—are completely happy with this.

Before we launch into the respondents’ remarkable accounts of their writing lives I want to comment on the place of the arts, but writing in particular in the world today.

In her introduction to the Penguin Classic edition of Middlemarch, Rosemary Ashton says that through Eliot’s characters, ‘We are reminded in a variety of ways, from the comic to the pathetic and the tragic, of our human fellowship...’

From the Anglo Victorians of Eliot’s day, came not only commercial exploitation and domination of colonial peoples but also the exploratory development of humanist thinking in secular government, Fabian socialism, the trade unions, the suffragettes, civil society, and ways of caring for the disadvantaged and much more.

Some writers continue as meliorists, Eliot’s word, wishing to reform and repair the world, to leave it a better place, and see serious writing as part of the humanist enterprise, although some of us may teeter on the edge of the cliff of nihilism and others take the leap.

It is easy to feel that the species has done perhaps irreparable damage to the planet and, as white Australians, damage to the Indigenous People, and, as I write, that the forces of brutal irrationality and demagogy are gradually overwhelming political life in many places – that the great values of the arts are being abandoned and scorned, even in Australia. Economic and technological change, with its inherent uncertainty and ‘creative disruption’, if not impending collapse, has for a time impacted on the arts and the mechanisms of reward. That does not mean that we cannot struggle to survive this with whatever influence we have.

The redefining of the economy of writing and public and other patronage probably should be done by an urgent Commission of Inquiry into Support for the Arts.

Eliot understood both personal and civic despondency, and the sense of futility which the human condition can at times induce, but, I think, along with her, that it is still worth trying to carry on in her spirit—that the practice of the arts and sciences are the basis of a civilised life—a form of defensive humanism which will once again ultimately shape our lives and prevail.

I do see no other option.