I’m coming around to an idea first explored by Bernard Mandeville in The Grumbling Hive (and to a lesser extent, Jerry Seinfeld in Bee Movie) that it is our vices rather than our virtues which bind us together as a society and that if we are nice to each other and treat everyone fairly, the hive in which we all toil will fall apart. In other words, were we to rid ourselves of vanity and pride and greed and so on, there would simply be no incentive to get things done.

It is the hankering for worldly stuff and secular glory that drives the wheel and time spent helping people up John Landy-style is time spent not thrashing the opposition by an even greater margin. Being way out in front when you cross the finish line is what progress is all about and that’s why you want arseholes in charge.

I suspect being a bee would be miserable. Work and sex, and that’s it. Of course, put like that, it doesn’t sound too bad, but imagine spending your entire life building a world out of your own sick for your children to grow up in. Bees don’t have any ambition though and this is where Mandeville and Seinfeld come unstuck—and the Labor Party comes in. 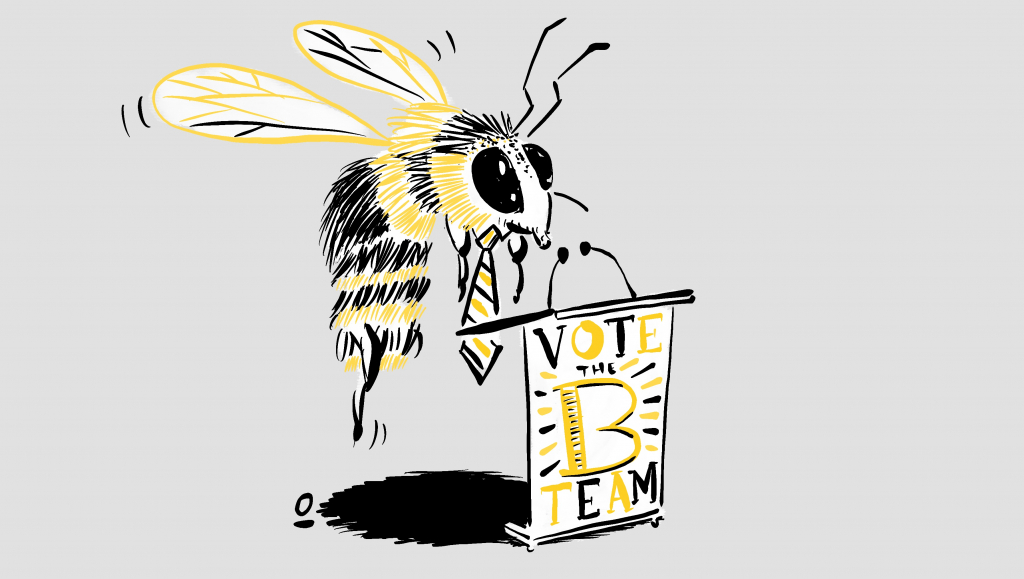 When we’re born, we are slaves to our cake-grabbing-because-we-want-it-now-Daddy instincts. Splonks mistake this for Freedom when really it’s quite the opposite; a yoke we must shake off if we are to rise above the common herd and take our rightful place as Godhead of All Things. Obviously, we can’t all be Godhead of All Things—there’s only one throne and only a certain number of ‘all things’—so, we civilize ourselves. We learn when we are young that by not grabbing the cake, we are being well-mannered; that by sharing the cake we are generous; that by not eating the cake at all we are abstemious and pure. We absorb this approval, store it up like honey in a comb and eventually come to see ourselves only as versions of how others regard us. The instinct to grab the cake has been trumped by a newer instinct to be seen as well-mannered, generous, abstemious, and pure. Ah, to be a bee. Or not a bee. That is the etcetera…

We are, at the end of our tether, in something of a cleft stick. Wanting to have our cake, eat it too and feel virtuous by showing everyone we want nothing to do with it. Not only that, we need others to not have or eat cakes as well. We might even ban cakes entirely to assuage our own feelings of self-loathing. Of course, that’s more Religion than Society; once the same thing, but not anymore. Nowadays we live in a world where we pretend to tolerate each other’s delusions. Within reason, of course. It’s all very well to, say, wear an unusual waistcoat; it’s quite another thing to wear it while blowing yourself up in a shopping centre.

All this nodding through gritted teeth while some lunatic blathers on can make life unbearable. How Ellen Fanning does it every night on The Drum I’ll never know. But fear not. Eventually, the Invisible Hand comes into play, forms itself into a fist and punches the offender in the mouth.

Which brings me back to my initial question about Labor. And, yes. They do have a point.

As a socially progressive political party dedicated to the commonweal and parity of opportunity and outcome, Labor is an exemplar of virtue. For the reasons discussed, most of us who don’t have any power feel virtue is a good thing. We rise up against our hive masters to bring it to the world, form such things as trade unions and vote in Labor. But then the economy doesn’t grow because no one can make any decent coin by exploiting the shit out of others. What we really want is Labor exactly where it is now: on the sidelines, complaining about how awful those actually in charge are behaving (or bee-hiving).

Labor exists to pay lip-service to how we could be if only our government was run by nicer, decent, more compassionate people while economy and industry grow with its usual psychopathic abandon. And I think Labor are doing a great job giving us the false hope that things will be better one day. In fact, safe in the knowledge they’re never going to get elected, they really could afford to up the volume and be a lot more sanctimonious, particularly about refugees.