Seventy five years ago, in mid 1944, two Australian poets in their twenties perpetrated—with gleeful malice aforethought—a hoax on a 21-year-old modernist whose star was rising faster than theirs. When it was revealed it went viral by wire from Sydney to London to New York and parts east and west.

The English modernist Herbert Read stood up for the poetic qualities of the doggerel and in retrospect it would be seen to have anticipated both sound and found poetry. Orson Welles recorded a recitation of it. Jazz musicians composed to it—James McAuley, one of the perpetrators, was himself a good jazz pianist.

McAuley had also written a masters thesis on Symbolism: An Essay in Poetics but it hadn’t got him a university lectureship ‘perhaps because’,  as Michael Heyward put it in 1993:

‘On the eve of the Second World War, the Faculty of Arts at Sydney University was not ready for psychoanalytic discussions of poetry in several European languages.’

In October 1943 two conscript poets assigned to the  wartime think tank  that was the progenitor of the Australian School of Pacific Administration spent a Saturday afternoon creating collage poetry in their room at the Victoria Barracks in Melbourne. They planned to submit the purported oeuvre of a fictional dead poet, Ern Malley, to the literary journal Angry Penguins. Their goal was to hoax its editor  whom they found highly annoying, overconfident in what they considered to be his uncritical commitment to modernism and overzealous in his own self-promotion: the Adelaide University student, Max Harris. His two tormentors, James McAuley and Harold Stewart, were four and five years older than the precocious but obnoxious ‘Maxie’, as they referred to him.

They also hoped to take down as collateral damage the British Modernist critic Herbert Read and the incumbent Attorney General and Minister for External Affairs in the Australian wartime cabinet, Herbert Evatt who with his wife supported modernist art and poetry.

The poets gave a reading to their colleagues in the  Directorate  of Research and Civil Affairs including the future Governor-General of Australia, John Kerr who was working on constitutional implications of the postwar plans for Australia’s dependent territories.

Kerr apparently did not object in principle to trying to target Evatt, who had sponsored his first year at law school and taught him about the interesting potential of  reserve powers of the Crown during the dismissal of New South Wales premier Jack Lang by the  state governor in 1932.

Kerr recalled in his 1978 memoirs:

‘Another idea we toyed with was whether the hoax should be extended. Thought was given between McAuley and myself to whether an important public figure might be invited to write an introduction to the poems; but we decided it was too risky and idle talk along those lines was abandoned.’

He pointed to McAuley’s recollection in the January 1976 issue of Quadrant (of which he was then editor):

‘When Harold Stewart and I were ready to send off the Ern Malley poems to Mr Harris, I asked John what the legal position would be if we received money under what might be loosely termed false pretences. John laughed and said he doubted whether the law had anything to say on the point, and therefore it might unpredictably say anything, though he doubted there was any serious risk.’

No-one including the lawyers at the  Directorate, who were planning the future of postwar Australia, apparently noticed that some of  the resulting material submitted to Harris in Adelaide might land him in court on charges of publishing ‘indecent advertisements’.

Later, on 28 February 1944  Reed—possessor of a third-class law degree from Cambridge University and also  an LL.B from  the University of Melbourne—suggested, in reference to  Harris’ own poems that were to be published in the Ern Malley issue:

‘We would like to put in the little ‘Dreaming Face’ poem and what about the Pornographic [sic] one?’

The Ern Malley  poems  reached Harris in Adelaide in  December 1943 and John  sent them to Sidney Nolan (who became a partner in Reed & Harris, publishers of Angry Penguins in February 1944), then a conscript posted to guard duties in the Wimmera farming district of Victoria.  Both Heide’s Sunday Reed and Nolan thought the poems were more European than Australian in their allusions and sensibility,  causing them to wonder at how an unknown novice could have educated himself in such a broad oeuvre.  While John and Max hired private detectives to check Ern’s provenance, Sid and Sun worked on the design of the Ern Malley pages for the Autumn (June) 1944 issue of Angry Penguins.

Nolan had been given a month’s leave without pay to work for Reed & Harris from July 20, 1944  but when the leave expired he absconded from the Australian Army. 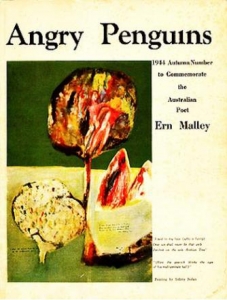 On August 1 Max Harris was interviewed by Detective Vogelsgang in Adelaide  who according to the ensuing charge sheet, had been:

‘instructed to make inquiries and we are making inquiries in connection with the provisions of the Police Act [of South Australia] with respect to immoral or indecent publications.’

‘If there is any attempt to humiliate or belittle anybody I should take the rap… because I was by far the least cautious.’

‘It would be a mistake to try and isolate responsibility on yourself in the way you suggested and it is an occasion when more than ever the firm gets an opportunity to vindicate its integral position.‘

A few days later Reed set out a proposed defence strategy, which clearly owed a great deal to the influence of Dr Reginald Ellery, a Melbourne psychiatrist who was part of the Heide circle.

‘Tentatively it seems to Nolan and to me  that we should aim for …. the substantiation of the poems from internal and subjective sources focussed on the unconscious impact on the writers (McAuley and Stewart) of the creative stream of the age, which in this case has, unknown to them, broken  through their inhibitions and repressions.’

He reported that Sunday wasn’t too keen on this.

‘The position however is extraordinary and Sunday is by no means happy that this is the solution of it. She has steadily adopted the attitude that once the hoax is disclosed, the poetry and the whole Malley setup undergoes some change and she can no longer feel the same about the poems. What that change is she is not quite sure, but she is equally not sure that our evaluation of the position is correct.  It is certainly something new that good poetry is created out of deliberate roguery.’

‘We are reduced to the deep, complex and entirely revolutionary hypothesis I have suggested name that these men have absorbed  without knowing it the vital culture of the last hundred years (not ‘beginning with Dada’ as they stated), but have been inhibited by reason of some personal complexes from utilising it in their ‘serious’ writing and have only been released when writing in a way which imposes no obligations on them.’

Dr Ellery testified at the trial in Adelaide  and  referred to:

‘An emotional satisfaction such as one gets from listening to music, because the various sentences in these poems so far as I can see are held together not by logic so much as an association of ideas.’

Harris’ defence lawyer  asked Reed: ‘What do you regard as poetry Mr. Reed, what can fairly be called poetry?’

Reed replied: ‘I find it difficult to answer that question. For myself, the main factor in appreciating the poem is its overall impact on me through  its poetical qualities of imagery and rhyme and use of words, association  of words, and other things. I regard literary meaning as definitely subsidiary, it is the overall impact I receive from it.’

But the judge wasn’t buying it. In his Decision he commented that:

‘One cannot but be conscious, however, of the ludicrous aspect of a solemn and serious attempt to interpret seriously poems which may have been written in a far from serious spirit. The information which the defendant has received since the publication of the poems has not, however, deterred him in any way from endeavouring to place a serious interpretation on these poems, and, it appears to me, that I must consider the material pages in their context, and, if there is a reasonable interpretation which is not indecent, immoral or obscene, then they should not be held to be indecent, immoral or obscene.’

He dismissed the evidence of Dr Ellery and two literary witnesses saying that he accepted that the material was not obscene but:

It does not follow, however, that the effects  on their minds as regards any particular matter being offensive to their sense of propriety or delicacy is necessarily the best test to be observed as regards indecency, as I think their opinions in this regard are purely personal and not necessarily being connected with their being experts in their respective fields.

Asked  early in the trial if anybody ever exercised censorship in Angry Penguins Harris replied: ‘That is exercised by my partner [Reed] who is a member of and knows the law which I do not.’

It wasn’t pointed out at the trial that an erratum slip was included (at least in the copy I bought on ebay several years ago) for one of Harris’s own poems that advised: 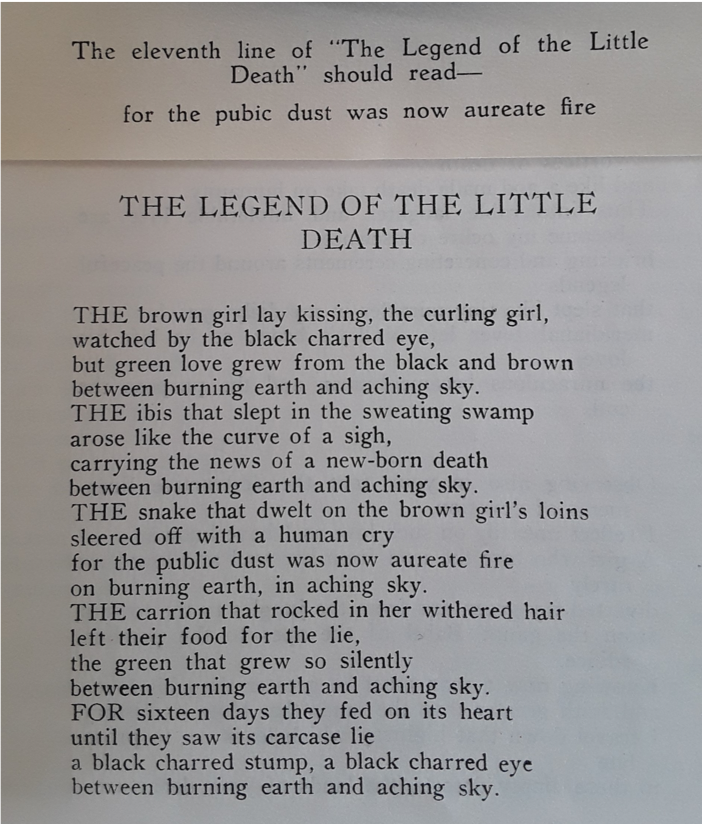