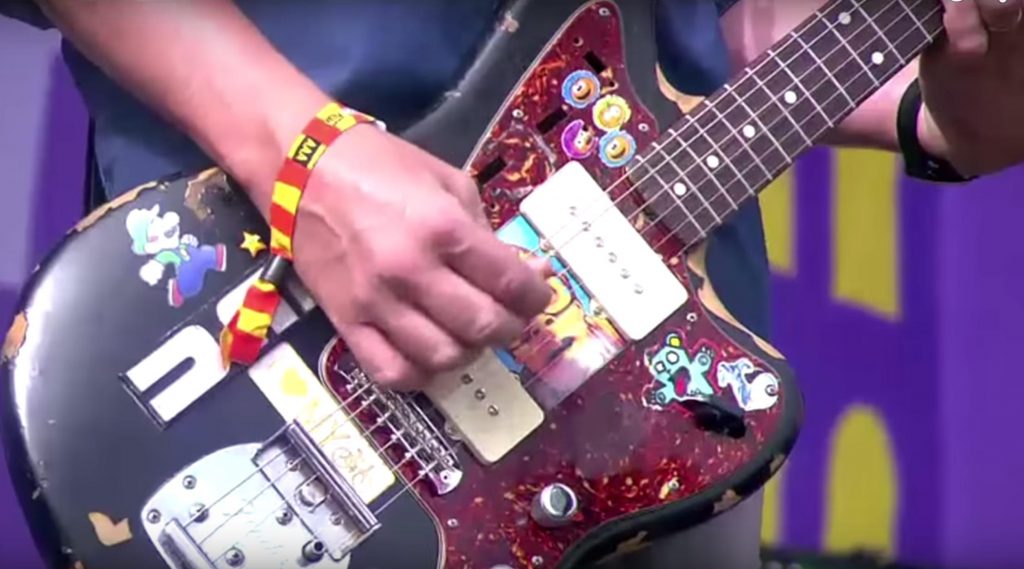 Around the same time Brand New’s Jesse Lacey was singing songs about wishing his ex-girlfriend would die in a plane crash because she had the audacity to do a semester of college abroad, he was coercing underage girls into sending him nudes.

These things are not unconnected. The fact that those girls felt they couldn’t publicly share what happened to them until more than 10 years later, now that they are nearly 30 years old, is no coincidence. The lyrics sung by their heroes and in bands like Brand New, Fall Out Boy, Weezer and New Found Glory set them up as prey for sensitive emo men.

In 2003 Jessica Hopper wrote about the rise of commercial emo, and the complete contempt with which the male songwriters operating in this genre viewed women. Her essay, Emo, Where The Girls Aren’t, examines the misogyny of emo in a wider context within rock music — a genre that has a long and proud history of outright misogyny and contempt for women.

Or, as Pete Wentz’s lyrics for Fall Out Boy’s Sugar We’re Goin’ Down from their 2005 album From Under The Cork Tree put plainly:

I’m just a notch in your bedpost / but you’re just a line in a song.

Or, in Dance Dance from the same album:

I only want sympathy in the form of you crawling into bed with me.

Her own teenage introduction to counter-culture came through exposure to Riot Grrl, that angry feminism-fuelled reaction to the bro-eyness of 80s hardcore, and she wondered how these girls would be affected by their early exposure to this contemptuous misogyny delivered in a catchy and handsome package:

‘My deepest concerns about the lingering effects of emo is not so much for myself or for my friends — we have refuge in our personal-political platforms and deep-crated record collections — but rather for the teenage girls I see crowding front and center at emo shows. The ones for whom this is their inaugural introduction to the underground … The ones who are seeking music out, who are wanting to stake some claim to punk rock, or an underground avenue, for a way out, a way under, to sate the seemingly unquenchable, nameless need — the same need I came to punk rock with.’

Jessica Hopper was concerned about the cultural effects this toxic misogyny would have on young women engaging with creating their own art. Hopper’s argument was that young women might not envisage themselves making music and fronting a band if all they saw were wall-to-wall all male emo bands writing about how evil their exes are. It was the antithesis of her own experiences with Riot Grrl.

It’s a fair point, but here’s the big question — what has effect has the behaviour and demeanour of Jesse Lacey and those like him had on impressionable young male fans?

Since the turn of the millennium, a generation of angsty young men have been influenced by Jesse Lacey and his contemporaries. They’ve seen him write self-pitying songs about how sad he is and idolised him for it. So sensitive! So tortured! Not like the jocks! He and boys like him won’t hurt you like the others.

Jesse Lacey’s legacy will be modelling behaviour to a generation of teenage boys that it is ok to treat women with contempt. If you’re in a band, it’s even more ok, because you are a tortured artist and the pain and suffering of these women is really in the service of art. As a man in a band, you are entitled to the bodies and minds and trust of these girls. It’s your due. It’s like groupies, but less Almost Famous and more creepy.

In the 15 years that passed between Jesse Lacey writing whiny songs negging girls for choosing to wear make up and not appreciating his pop-punk band and Jesse Lacey, husband and father on the cusp of middle age, having to publicly explain his past revolting behaviour, this trope has been examined more.

The now infamous ‘Cool Girl’ monologue from Gillian Flynn’s book (and subsequent movie) Gone Girl provides an insight on why these adult men keep trying to get down with teenage girls instead of women their own age:

Men always say that as the defining compliment, don’t they? She’s a cool girl. And if you’re not a Cool Girl, I beg you not to believe that your man doesn’t want the Cool Girl. It may be a slightly different version — maybe he’s a vegetarian, so Cool Girl loves seitan and is great with dogs; or maybe he’s a hipster artist, so Cool Girl is a tattooed, bespectacled nerd who loves comics. There are variations to the window dressing, but believe me, he wants Cool Girl, who is basically the girl who likes every fucking thing he likes and doesn’t ever complain. (How do you know you’re not Cool Girl? Because he says things like: ‘I like strong women.’ If he says that to you, he will at some point fuck someone else. Because ‘I like strong women’ is code for ‘I hate strong women.’)

These men don’t want grown women. Grown women see through their bullshit tortured genius messiah act. They want girls — in many cases, literal schoolgirls who are legally unable to give sexual consent.

This principle extends to the entourages around even moderately successful bands in the emo/pop punk genre.

In the mid-2000s, when Australian emo band The Getaway Plan was at the peak of their fame, their tour manager John Zimmerman was using his proximity to said fame to groom and rape 55 teenage girls, many as young as 14. Nearly all of his victims were fans of The Getaway Plan, and more than once he promised his victims that they would get to join the band on tour and meet the members. Zimmerman was 21 when he began his offending in 2006, and was found guilty of 92 charges including rape, sexual penetration of a child under the age of 16, possessing child pornography, using a carriage service to groom a minor and using a carriage service to harass.

He was sentenced to 16 years in prison, and will be registered as a sex offender for the rest of his life.

I want to be clear that I am not insinuating that the members of The Getaway Plan were involved in Zimmerman’s activities, or were anything other than sickened and horrified when they found out about them. However this excerpt from a report on Zimmerman’s sentencing in Melbourne newspaper The Age describes behaviour which is depressingly similar to the allegations levelled against Jesse Lacey:

Zimmerman encouraged one victim, who was 14 years old, to email him pictures of herself in her underwear, Judge Maidment told the court.

After they agreed to meet, Zimmerman picked the girl up from school and sexually assaulted her in the back of his van.

He later pressured her to meet with him again, by threatening that he would reveal what she had previously done with him.

Judge Maidment said that Zimmerman used this approach with many of his victims.

In the comments sections and on message boards all across the internet, there are stories and allegations about dozens of men in pop-punk bands who’ve engaged in sexual conduct with girls who were underage or barely of age, most of them fans.

Earlier this week, Australian pop-punk band With Confidence were kicked off the package of their their US tour supporting Knuckle Puck following allegations that their guitarist Luke Rockets had been sexting a female fan who was under the age of consent. The particulars are similar to the Jesse Lacey stories, but instead of AIM on a clunky computer with an external webcam on dial-up, it was Facebook messenger on a handheld device. The allegations came with some damning and revolting screenshots of said sexts, and the band swiftly fired Rockets before putting out a statement in support of the victim. A few days later, another young woman shared screenshots of Snapchat messages from 2013 where the band’s singer Jayden Seely asked her for explicit photos. She was under age and he was 20. The band put out yet another statement and withdrew from all planned touring — in no small part because every tour and festival they’d been booked to play had booted them off the lineup.

Bands such as Camp Cope, Waxahatchee and Speedy Ortiz all have female members who grew up under the cloud of the mid-00s emo boom. I have no doubt their outspokenness against band bro culture is a direct result of their formative experiences as teens, and what they put up with every day as adults. Camp Cope’s new single The Opener is a scathing take-down of the emotional abuse and misogyny perpetrated by men who feel incredibly uncomfortable when women encroach on places they see as ‘theirs’ — the stage, festival lineups, big venues.

Brand New were planning to call it a day next year anyway, and their recently released album Science Fiction was always going to be their swan-song. Jesse Lacey has the biggest messiah complex in popular music since Billy Corgan and no doubt he will view this whole mess as the crucifixion he was expecting all along, a dramatic ending to the life of a martyr. Here’s hoping there’s no resurrection of the whiny toxic misogyny and predation he and his contemporaries sold wholesale to impressionable teens of all genders.

Sophie Benjamin is a Melbourne writer and musician.