Nearly sixty years ago Sir Robert Menzies, Leader of the Liberal Party and Prime Minister of Australia, was trying to do a secret deal with his British counterpart, Harold Macmillan, for the supply of nuclear weapons to Australia, a deal he was keen to see done before the treaty banning atmospheric nuclear tests came into effect.

A formerly Top Secret file has been lying on the open shelves of the UK Public Records Office and now its National Archives since 1993. 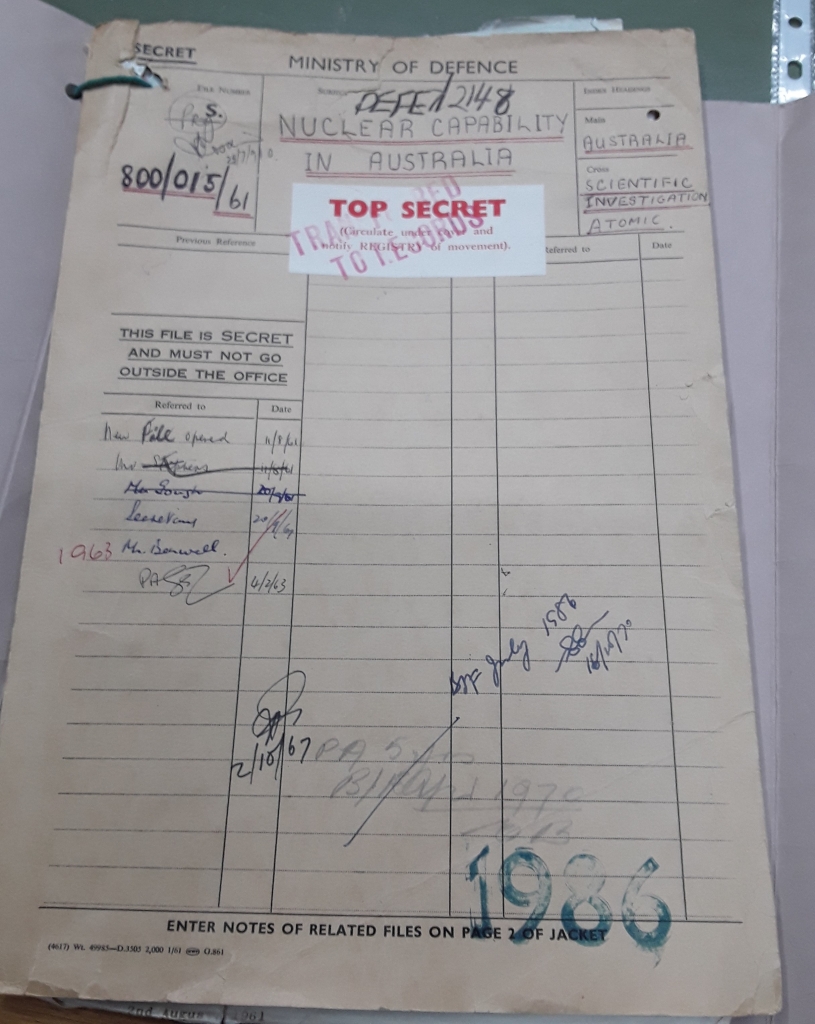 Labelled Nuclear Capability in Australia it opens with a letter from Prime Minister Robert Menzies to his British counterpart, Harold Macmillan dated June 29 1961 asking for Australia to be supplied with manufacturing data or ‘ready-made nuclear weapons’.

Menzies informs ‘My dear Harold’ that the proposal being discussed at the Geneva Nuclear Tests Conference for ‘control posts’ in nuclear testing countries such as Australia had been for a decade or more for the British had triggered concern over ‘an even weightier though connected matter.’

Such a treaty as was being discussed,

‘…could prove to be a serious limitation on the range of decisions open to a future Australian Government in that it could effectively preclude or at least impose a very substantial handicap on Australia’s acquisition of nuclear weapons.’

The Russians were ‘insisting on the establishment of control posts in Australia’ and Australia would be banned from developing its own nuclear weapons.

‘For this reason’ Prime Minister Menzies wrote, ‘I must ask you to accord full recognition of the potentially serious security situation in which Australia could find herself placed as a result of having accommodated United Kingdom testing.’ 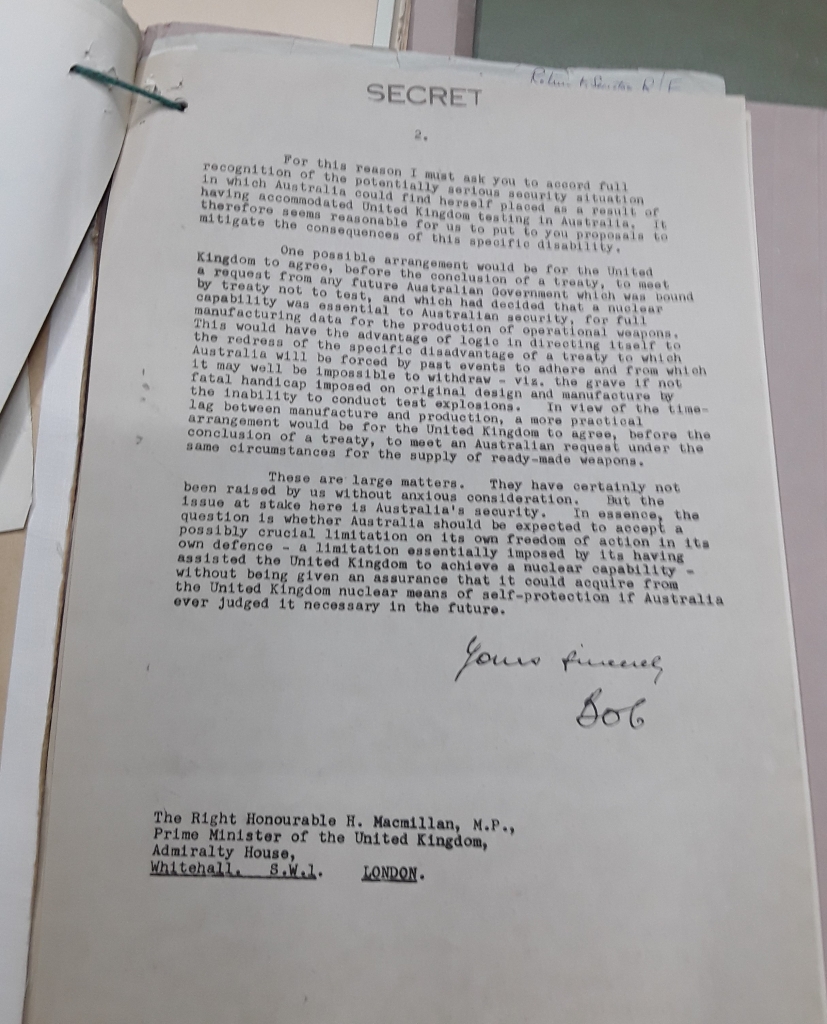 One solution, he suggested,

‘…would be for the United Kingdom to agree, before the conclusion of a treaty, to meet a request from any future Australian Government which was bound by treaty not to test, and which had decided that a nuclear capability was essential to Australian security, for full manufacturing data for the production of operational weapons.’

This would, Menzies pointed out, overcome

‘…the grave if not fatal handicap imposed on the original design and manufacture [by Australia of its own weapons] by the inability to conduct test explosions.’

Australia had allowed British testing on Australian soil for the British development of their H bomb and nuclear tipped ballistic missiles. The United Kingdom conducted 12 major nuclear weapons tests in Australia between 1952 and 1957. These explosions occurred at the Montebello Islands, Emu Field and Maralinga.


Menzies suggested to Macmillan that, all things considered,

‘…a more practical arrangement would be for the United Kingdom to agree, before the conclusion of a treaty [to make provision for] the supply of ready-made weapons.’

Three weeks later the Permanent Secretary at the UK Ministry of Defence, Sir Edward Playfair received a long note from his colleague Roger Makins, former British Ambassador to the USA and currently the Chairman of the United Kingdom Atomic Energy Authority.

‘You should know without delay that Professor Titterton, the British scientist now working in Australia in the nuclear energy and defence field, called on [Sir Willliam] Penney at Harwell yesterday’ at the behest of the Australian Minister of Supply and the Ministry’s Permanent Secretary.

They were sounding out Penney on the possibility of an independent nuclear deterrent for Australia. Depending on the advice received they might or might not raise matters with Mr Townley, the Australian Minister of Defence and Sir Leslie Martin, the Chairman of the Australian Defence Policy Committee.

‘Titterton said that high ranking Australian service officers, and Defence officials were extremely restless about their defence position. Russian bombers had been supplied to Indonesia and not only were Australian air defences poor but the whole north coast was wide open. There was therefore pressure in Australia to know more about nuclear weapons, not so much the inner details of weapons, but the practical questions of size, weights yields, costs, storage questions, personnel to maintain etc.’

‘I think you will agree that these are rather deep waters… It is a problem which should clearly be dealt with by you and by the Commonwealth Relations Office rather than by the [Atomic Energy] Authority.’ 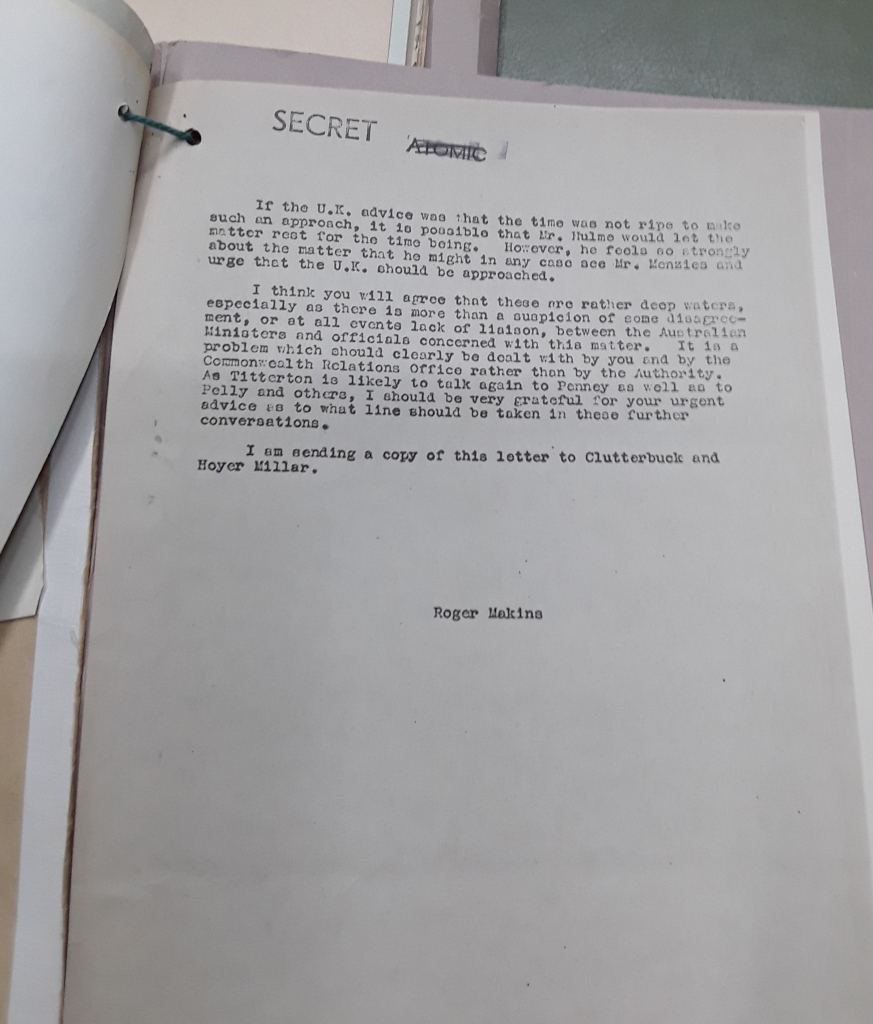 The British Foreign Secretary minuted his copy of Menzies’ letter on July 24, 1961 that,

‘To give this manufacturing data to Australia would have to be a secret act with the connivance of the Americans. If we attempted to make an open exception of Australia the Russians would almost certainly do the same for Indonesia, or other potentially hostile countries.’

‘I would feel that it would be much better to suggest that we and the Americans should enter into a commitment now, not only to supply the weapons, but the means of delivery when Australia felt that her safety was in imminent danger. This would need American co-operation but I don’t see why they should object to a secret agreement of this kind.’

‘This is the first clear statement that we have had showing a definite Australian interest in acquiring a nuclear capability “essential to Australian security”, and suggesting that the U.K. should meet a possible future Australian request for “full manufacturing data for the production of operational weapons” or, alternatively, “meet an Australian request under the same circumstances for the supply of ready-made weapons.” ‘


However the writer noted that this was not unexpected because:

‘We have had reason to suspect that something of the kind might have been behind the representations from Sir Leslie Martin and Mr Townly [sic] last April and again by Professor Titterton a few days ago.’

The writer of the memo considered that ‘The Australians have a strong point in associating their proposals with the need “to mitigate the consequence of [a] specific disability” which indeed arises “as a result of having accommodated United Kingdom testing in Australia”.’

He notes that the British Prime Minister ‘is anxious if possible to help the Australians’, and concludes, ‘Both the political and technical factors suggest to me, at this stage, that a solution should be examined on the basis of supplying ready-made weapons if required, rather than disseminating full manufacturing data for the production of weapons.’

On July 31 an official of the Commonwealth Relations Office in Downing Street had lunch with Professor Ernest Titterton, an old friend now Chairman of the Australian Nuclear Safety Committee who (as in his meeting with Penney) had turned the discussion to four points relating to costs, dimensions, yield and availability of UK nuclear weapons.

‘He had in mind not so much a political decision to make weapons available to Australia, but the question whether there would physically be supplies which could be made available. He said that he had in mind a situation where the United Kingdom and the United States might be fully engaged elsewhere and Australia would need to do something on her own to react against an Indonesian attack on her northern coasts. This ties in with the request in the last sentence of the penultimate paragraph of Mr Menzies’ letter to the Prime Minister. And you will remember that Mr. Townley made the same point in his talk with the Minister of Defence last May.’

On August 2 Sir Solly Zuckerman, Chief Scientific Adviser to the Ministry of Defence, reported that he’d ‘already had a foretaste of this request in an approach from Professor Titterton’ asking whether ‘the U.K. would react favourably to an official, but strictly confidential, approach from Australia requesting information about U.K. nuclear weapons.’

Zuckerman suggested that Prime Minister Menzies should ‘be brought more deeply into the operational picture – as distinct from the technical questions of how a nuclear warhead is constructed.’

A Top Secret memo dated August 8 1961 from the UK Ministry of Defence echoed this and proposed that the first response should be,

‘…educating the Australians in the problems of controlling the use of so called tactical nuclear weapons and thereafter discussing, with the Americans, how Australian needs for nuclear weapons might be met by supplying them with the weapons if the need should arise.’

A memo of August 11 makes the point that,

‘…should there be a Nuclear Tests Treaty, neither the Americans nor we could supply manufacturing know-how or nuclear weapons since to do so would run directly counter to the spirit of the Treaty.’

But it also acknowledged that,

‘…if there were a war the Nuclear Tests Treaty would go by the board anyway and this would free us to do as we like.’

After six weeks of internal discussion around London’s civil service, Macmillan replied to Menzies in mid-August 1961

However, he would have to consult with the Americans if the Australian Prime Minister agreed to him doing so.

He also suggested that since

‘…we have recently given a lot of thought to the role of the various types of nuclear weapons as a deterrent to war and their deployment and use in war, both tactically and strategically, we should be glad to share with you our thoughts on those matters.’

He proposed that British experts should meet with General Pollard, Australia’s Chief of General Staff, when he was in London in September. 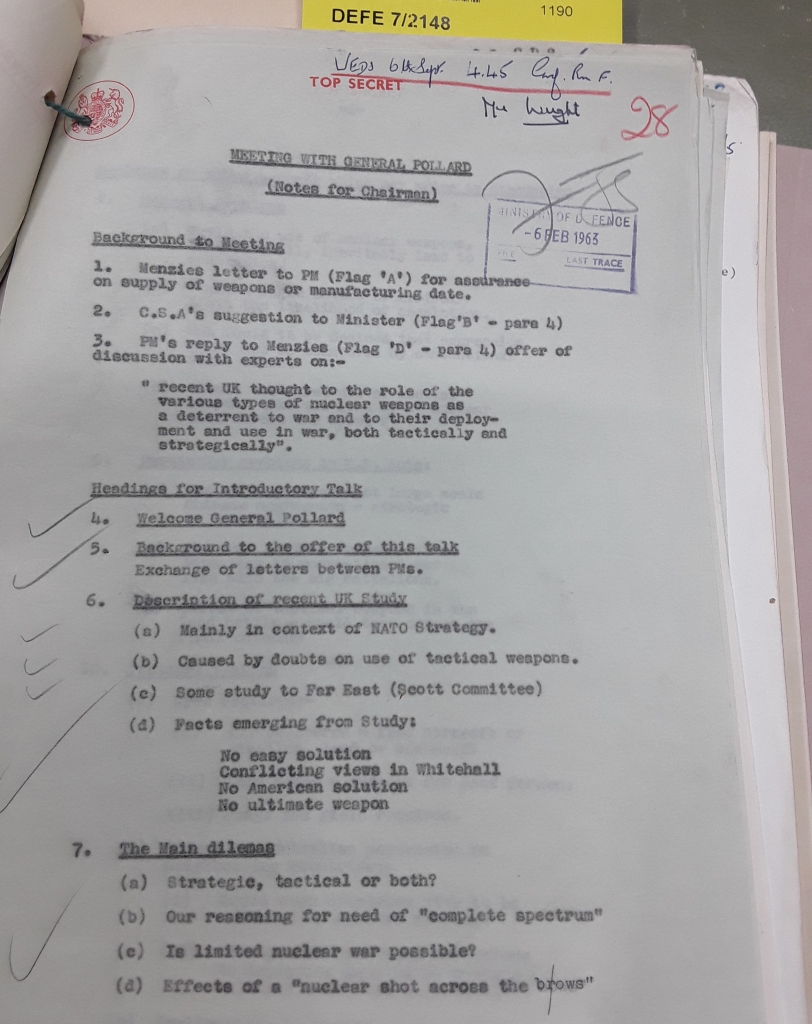 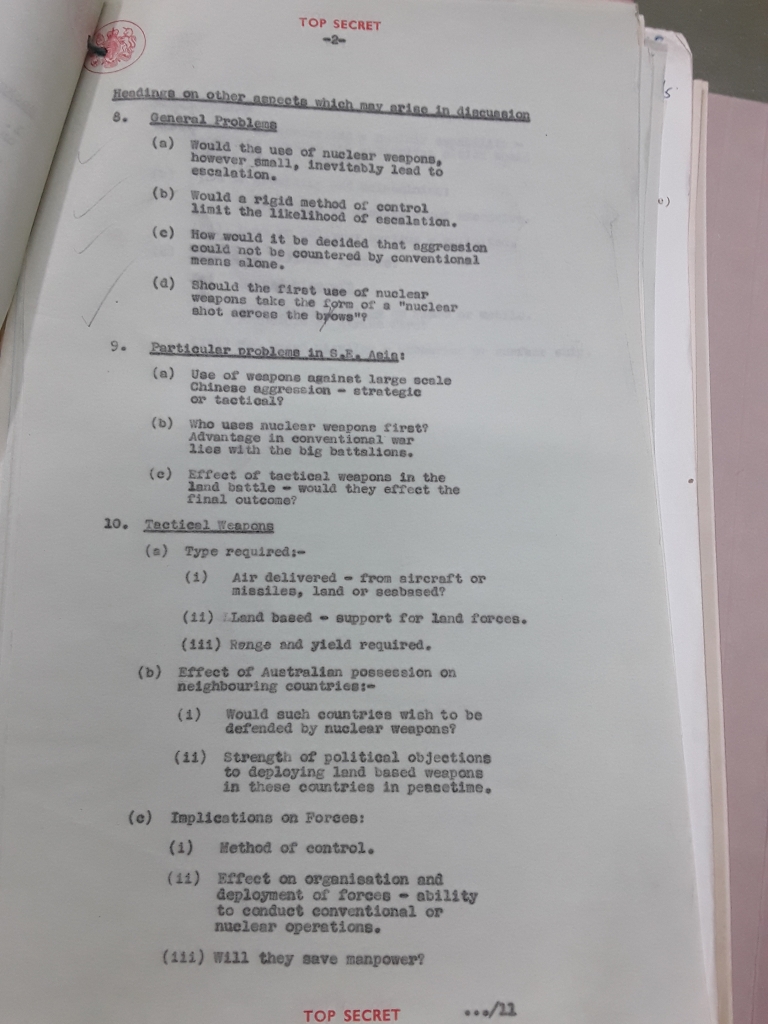 That briefing took place on September 6, 1961 in London and the agenda and Note are in the file that started with Menzies’ request to MacMillan. Sir Reginald was briefed on the possibilities but also the limitations of tactical nuclear weapons in the new era of nuclear balance at the strategic level. He was told that in NATO discussions

‘The idea had been advanced of the discriminate use of small weapons to force a pause in a land aggression, which might take the form of a series of “nibbles” against which one would not wish to employ all-out nuclear retaliation. To seem unwilling or unable however to react to “nibbling” would lead to a reduction in the credibility of the deterrent.’

Or the ‘discriminate’ use of small yield weapons might in itself lead to escalation.

Even as the briefing progressed, Prime Minister Menzies replied to his British counterpart indicating his understanding that:

‘…under the terms of your co-operative arrangements with the United States in this field, you would need to consult them on the questions of making available to us nuclear weapon information or the weapons themselves, even where the particular information or weapons were predominantly or exclusively British in origin.’

Given renewed Soviet testing and the ‘working out of the full implications for the nuclear test negotiations’ the Australian Prime Minister thought that ‘the present hardly a very good time to take up our request in Washington.’

Social scientist Sue Rabbitt Roff has conducted extensive archival research in the UK National Archives; the Churchill Archives Centre and Wren Library of Trinity College, Cambridge; Cadbury Research Library of the University of Birmingham; the British Library; Dundee University Medical Library; Research Library of Los Alamos National Laboratory and National Archives of Australia with unstinting help from many archivists and librarians none of whom bear any responsibility for her interpretations. See related articles on https://www.rabbittreview.com.