Unless you had something better to do this week, you’ve probably seen Gillette’s new ‘The Best Men Can Be’ campaign.

Interestingly, the Gillette YouTube account doesn’t call this an ad but a ‘short film’. It’s upfront about intending to spark an emotional response. But from whom?

‘Something,’ it goes on—the gravitas! the rousing! ‘finally changed.’ There will be no going back, the short film says. The actors begin to stand up to their acting mates. They shake hands. They break up fights. A man comforts a bullied boy as his own tiny son looks on. HE’S SO LITTLE. HE WILL CHANGE EVERYTHING.

Violins swell. ‘The boys watching today,’ comes the omniscient boom, ‘will be the men of tomorrow.’

The internet is split into three camps on this:

The usual suspects have published moaning op-eds about the ad short film ‘backfiring’, citing alienated babies and YouTube downvotes. If you jump on Twitter today, you’ll enjoy many deeply unoffended cries of ‘is it even legal to be a man anymore?’ 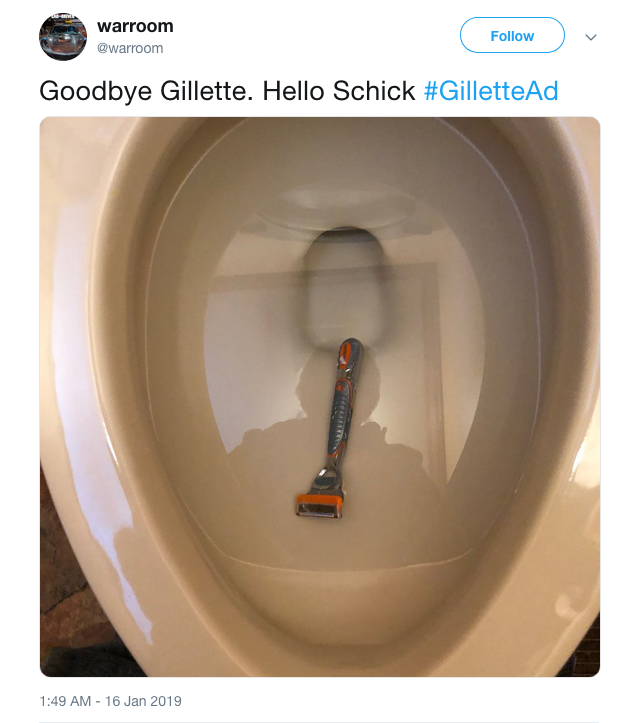 I am mostly in the first camp, with a healthy dash of ‘they just want our money’. When I watched the video I cried, then watched it again, then watched clips of soldiers coming home to surprise their children and cried some more. Like many other women, I’m just so tired and it’s nice to see someone else proclaim that men’s behaviour needs a serious service.

But I’m not without cynicism. Let’s ask ourselves this: who is the ad for?

‘Something finally changed,’ it claims. Okay, Gillette. The ‘something’ that ‘finally’ changed was, in fact, women. It was women coming forward with their stories of abuse. It was women refusing to stay silent on issues of toxic male crap. It was especially already-punched down women taking a great risk in speaking up. We’ve talked about this a lot already so I won’t go on and on, but men did not spontaneously decide time was up on bad behaviour.

No publicly-listed company runs any kind of campaign out of the goodness of its heart. Capitalism is not going to save us. Appealing to people’s individual biases is why we still have coal, microtransactions and Pauline Hanson. There’s a good chance Gillette’s advertising agency did not sit around a ping pong table and talk about how concerned they are about men’s toxicity. But they probably also didn’t shake their turmeric lattes and laugh about exploiting systemic bad behaviour for cash. The reality is likely somewhere in between.

At 1:14, a dad shows his toddler daughter her reflection and makes her repeat after him: ‘I am strong.’ Christ, it’s like injecting goodness into my actual blood. But she has to be, in this patriarchal mess. Gillette’s short film has just shown us everything that’s wrong with the way men behave towards women and one another. Yes, fathers of adorable girls probably do find this moving, but women are the ones who drew on their strength to make change. What woman hasn’t looked in the mirror of a morning and thought, fuck, how do I keep going?

‘Men need to hold other men accountable,’ says the disembodied social justice campaigner. Sure, but women make most household purchases, especially groceries and including grooming products. Women influence almost every buying decision in almost every family unit in western countries. Plus, women buyers represent a more profitable market for Gillette; their razors—this brand included—cost more but perform an identical function.

NY Mag’s Josh Barro says the difference with Gillette’s campaign is that it ‘asks [men] to do something’. He suggests loyal customers may feel ‘accused’ by the brand. And if the public response is anything to go by, plenty of dudes do feel like Gillette is literally saying to their faces, ‘Sir, you are a rapist.’ But they’re a small proportion of the customer base. The point of this vignette is not necessarily to encourage men to self-reflect.

This is not an ad for men. This is an ad for women.

Anna Spargo-Ryan is the Melbourne-based author of The Gulf and The Paper House, and winner of the 2016 Horne Prize. Her work has appeared in The Big Issue, the Guardian, The Lifted Brow, Meanjin, Overland, and many other places.