There it was, dropped neatly on to Twitter by the national broadsheet ‘for the informed Australian’. Three words–an entire tale told in half the space needed to sell unworn baby shoes.

The current news cycle requires no greater context, the headline was the inevitable distillation of the latest frothing ‘crisis’–any crime that could be linked to an alleged offender ‘believed to be of African appearance’ was grist to the mill.

That evening, pushing a pram through a park in Melbourne’s western suburbs to will a restless baby to sleep, I happened upon a man ‘of African appearance’. He was with his beloved, a woman also of African appearance, guiding her through some of the finer points of shooting hoops. We traded pleasantries and the pair made the appropriate gurgles of appreciation for my offspring. Clouding the exchange was a sense I have never experienced with any other neighbour: an apologetic air for their very existence in this public space.

I returned home, tucked in the now-sleeping baby, kissed his elder brother goodnight. All the while thinking that whatever challenges they may face growing up in Melbourne, their skin colour would not be one of them. I sat at the computer to catch up on some work. Instead, I tweeted. 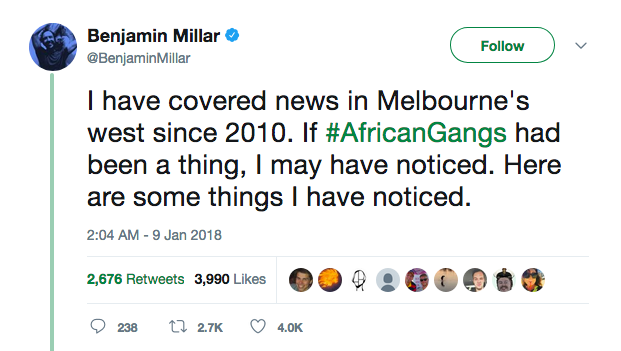 I have reported for a local community newspaper based in Melbourne’s western suburbs since 2010. Our patch begins at the lapping edge of the Maribyrnong River, stretching across the plain to the back of Bacchus Marsh. I am immersed in this community week in, week out. I take seriously my responsibility for every word I publish and I owe it to both my profession and this proud community to portray them fairly and respectfully, yet without fear or favour.

My round includes coverage of courts and crime. I come across offenders, both fresh faces and familiar, from virtually every race, colour and creed. This includes men of African appearance. In recent weeks some high-profile ‘public order’ and violent incidents have included perpetrators alleged to be of African origin. Is this a spate? A trend? A full-blown nationally significant crisis? With scant regard for the usual norms of evidence, politicians and powerful elements of the media have settled firmly on the latter.

And yet. Measured in both short and longer terms, crime in Melbourne’s west is trending downwards in almost every category. In the 12 months to last October, the most recent available data, overall reported crime dropped by more than 10 per cent in the inner-west, Brimbank and even Wyndham. However, 2018, you may have somehow noticed, is an election year in Victoria. Tub-thumping season. I’ve worked in journalism long enough to know that time and time again, whatever the data may show, an election year belongs to that eternal mistress beloved of Oppositions since time immemorial, Laura Norda.

As seemingly all of Melbourne catches up on summer reading by the sea, a vacuum forms for ‘meaty’ news. Exactly 12 months ago this was padded out by a breathless war on the homeless camped out at Flinders Street station. Melbourne City Council soon voted to ban homeless people from sleeping in the city, police swept in and the rough sleepers were tossed out.

This summer a string of highly visible crimes involving men ‘of African appearance’ has fanned an existing prejudice against the African diaspora in Australia. Media crews were suddenly plugging Tarneit into their GPS, descending for the perfect pictorial opportunity at ground zero for all that apparently ails the outer-west–Ecoville Community Park. Broken windows, graffiti tags, stuff where stuff should not rightly be.

Enter Victorian opposition leader Matthew Guy, vowing to deliver a tough-on-crime crackdown on ‘ethnic gangs’. This would include harsher mandatory sentencing, bail and parole rules, putting more people into prison, for longer, both before and after trial. Premier Daniel Andrews, back from a week away, swiftly upped the ante by vowing to deliver police greater powers.

Trashed holiday houses and suburban home invasions are not usually the remit of Federal ministers. Yet Home Affairs Minister Peter Dutton chipped in to suggest people in Melbourne are ‘scared to go out’ to restaurants at night because of African street gang violence,  while the Prime Minister of Australia made known his grave concerns for cowering Victorians.

In the background one can hear a faint sound–the collective sigh of relief from Australia’s Muslim population as attention shifts, however fleetingly.

My wife and I are raising a family in Melbourne’s western suburbs. At one point we lived on Victoria Street in Flemington, loomed over by commission flats that serve as the first home for many newly settled refugees from Sudan and the Horn of Africa. We were told to be careful. We were warned we should fret for our safety and belongings. The only trouble we ever had was the occasional swearing and loud music binge from the Anglo-Australian quarters.

I feel for each and every victim of any violent crime. As a reporter I have spoken time and again with victims of crime, misfortune, calamity and dastardliness of every stripe. I have spoken many times, too, with victims of persecution, vilification and violence based purely on their race or sexuality. The impact on each group is equally unacceptable and the scars with which they are left are not always visible.

A mature society can talk about these issues in a way that does not paint every member of a particular community as a potential or likely threat. Is able to address concerns around the behaviour of troubled youth without calling for a rejection of refugee and migration programs. It can sensibly consider the root causes of disaffection and disconnection and aim to stamp out violent crime without itself mindlessly baying for the blood of those who for whatever reason are seeking some solace or solidarity as part of a real or imaginary gang. From a purely pragmatic perspective, backing people into a corner at times of heightened tension and outrage simply doesn’t work.

Some reports on the ‘African gang crisis’ have sensitively handled the situation and cut through the chest-thumping political rhetoric. Others have poured further fuel on the flames, generating undue heat for African communities Australia-wide and emboldening sickening racist attacks.

As well as my weekly reporting round I cover breaking news for The Age, so understand the imperative to publish a story–any story, and immediately–on the hot-button topic of the hour. But when journalists paint their inability to engage with their subjects as a sign of inherent hostility, without due consideration of the effect of their particular words and framing, it’s time to take a step back and reflect.

It may surprise some to learn that journalists have a code of ethics, let alone to discover that a majority of reporters, at least if you ask them, value ethical reporting. The first standard is to report and interpret honestly, striving for accuracy, fairness and disclosure of all essential facts. The second is to avoid placing unnecessary emphasis on personal characteristics, including race, ethnicity and nationality.

This standard has been trampled in recent weeks. It does not disallow any reference to perceived race, with much debate around when it may or may not be appropriate to identify any such characteristics about an alleged offender. But there is no question that there has been ‘unnecessary emphasis’ in swathes of recent media accounts.

This was the substance of my Twitter vent late on Tuesday night. My aim was simply to draw attention to violent crimes in Melbourne’s west in recent years in which the race and ethnicity of the accused was never highlighted. I suggested there was a marked contrast with reporting of recent crimes alleged to have involved people of African origin. I brushed my teeth and went to bed.

Meanwhile, the thread was shared. And shared. And shared. Responses began pouring in–supportive at first but soon followed by a wave of vitriol. Someone scoured for my photo online and crafted a personalised attack meme. By Thursday evening the lead tweet in the thread was nudging 3000 retweets and 4000 likes, the thread getting more than 1 million impressions over a 24-hour period. Small fry for some but a tad unusual for a suburban hack. Some 48 hours later my notifications had not stopped pinging.

Yet I can turn off my phone. It will pass within couple of days. Melbourne’s African diaspora has no such relief in sight. But they are not silent. They are not powerless. Amidst all this, they have stood up. Spoken out. Held a cracked mirror to the narrative and offered their own take on the hashtag #africangangs.

It’s not a denial that there are some problems, but a broadening of our picture, a reminder of the humanity that is lost when we apply a prism that allows only one specific and negative association with skin colour to pass through.

Victoria Police Chief Commissioner Graham Ashton has confirmed a surge of public-order offences over the past month. Yes, African gangs exist. But suggestions of a crisis or of Victoria being an unsafe place to live? ‘Complete and utter garbage’. The Chief Commissioner conceded there are issues but called for perspective. Members of the African community, unrelated to any of this activity, are already receiving death threats.

As the week has progressed there have been subtle shifts in reporting in some outlets while others are still full-steam-ahead on the ‘Street Gang Crisis’ express.

On Thursday evening I returned to the tweet by The Australian that had been the straw that broke my patience. I clicked. The story was still there, but it was topped by a new headline.

Benjamin Millar is a Senior Journalist with Star Weekly and The Age. He tweets @BenjaminMillar