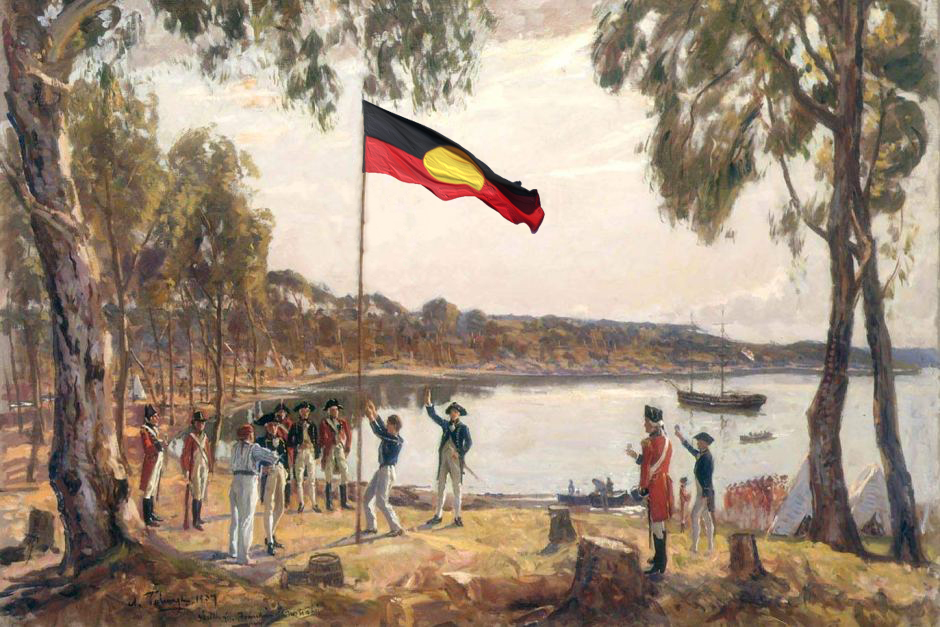 When Captain Cook made his treacherous voyage to Australia in 1770, he carried with him secret instructions from the British King, authorising him to ‘take possession of convenient situations in the country in the name of the King of Great Britain’ but to do so ‘with the consent of the natives’.[1]

On 22 August 1770, Cook declared possession of the east coast of Australia at Possession Island, which already bore its ancient name, Bedanug or Bedhan Lag, named by the Kaurareg people who lived there for thousands of years. Contrary to royal instructions, there was no agreement. There was no treaty. There was no consent.

In 1787, as his fleet sailed toward Botany Bay, Arthur Phillip, like Cook before him, carried secret instructions from the British King, commanding him to ‘endeavour, by every possible means, to open an intercourse with the natives, and to conciliate their affections, enjoining all our subjects to live in amity and kindness with them.’[2] These instructions were also not followed. Edward Wilson lamented in an 1856 newspaper that:

In less than twenty years we have nearly swept them off the face of the earth. We have shot them down like dogs. In the guise of friendship we have issued corrosive sublimate in their damper and consigned whole tribes to the agonies of an excruciating death. We have made them drunkards, and infected them with diseases which have rotted the bones of their adults, and made such few children as are born amongst them a sorrow and a torture from the very instant of their birth. We have made them outcasts on their own land, and are rapidly consigning them to entire annihilation.

Despite the Crown’s ostensible good intentions, the force and violence of colonisation cannot be described as a relationship of ‘amity and kindness’.

I think about the Crown’s unfulfilled instructions when 26 January rolls around each year. 26 January 1788 commemorates an unrealised good intention—a broken promise. Weirdly, we expect all Australians to celebrate what was in many ways the opening of a national wound, rather the healing of it. No wonder there is division: our nation has not yet done the necessary work to make right the wrongs of the past.

The date we celebrate is also historically inaccurate, for there was no Australia on 26 January 1788. When Phillip raised the flag at Sydney Cove and declared British sovereignty—unjustly denying and ignoring First Nations preceding sovereignty—the colony of New South Wales was created. Australia did not exist until 1 January 1901, when the Constitution united the disparate colonies into one Commonwealth.

January 26 commemorates an incomplete founding story. The question is: do we have it in us to complete it?

Every year, as January 26 approaches, we kick off our annual Australia Day furore—the cyclical history war of a nation spiritually and psychologically uneasy with itself. We gather at barbeques to revel half drunk in the half-told story of our land, never quite sure whether to celebrate or grieve. We rally in turns proclaiming our patriotism or mourning our loss, sorting ourselves into Invasion, Survival, or Australia Day parades. On January 26, the nation gazes at its own reflection and asks: who are we? What does it mean to be Australian? We don’t yet have a full answer.

…suggests that the offence being caused by current Australia Day celebrations can be reduced to the narrowness of the date in question – January 26. The logic of such an argument would suggest that if we were to return to July 15, or March 29 even (my birthday), the history of violence towards Indigenous people would become less offensive? Or forgotten perhaps?…

Such is the rhetoric of symbolic gestures in settler-colonial societies incapable of countenancing either the relinquishment of power, or the contemplation of genuine remorse…

If the young are our future, and I sincerely hope that they are, their pathway will be forged in action and a call for self-determination rather than hollow symbolism and a patronising call to display patience.[3]

Birch calls for substantive justice over symbolic date changes. I tend to agree.

This is also why I am unpersuaded by Fairfax journalist, Mark Kenny, who argues that ‘if the country cannot bring itself to deliver meaningful constitutional recognition of the original inhabitant owners, nor even an Indigenous advisory body, for fear of creating a so-called “third chamber” of Parliament, surely settling on a date of national celebration that does not wilfully gloss over violent dispossession is reasonable.’[4]

This is a cop out. It suggests that meaningful constitutional recognition through a First Nations voice is too hard, and that changing the date is a reasonable alternative. Kenny suggests May 9: ‘the date in 1901 Australia became a self-governing federation; again in 1927, when the Parliament shifted to Canberra (from Melbourne); and finally, in the bicentennial year of 1988, when the current Parliament House was opened.’ Sorry, but how does that address Indigenous concerns? How is 9 May more innocuous or inclusive than 26 January? We would be celebrating the democratic institutions that initially excluded Indigenous peoples, which for decades (in some jurisdictions particularly) denied them fair and equal democratic participation, and which still deny them just recognition through a voice in their affairs. May 9 is no more an inclusive celebration than 26 January. It is just another date that celebrates our British institutions—and nothing else. That is not justice.

I am drawn to Jenna Price’s challenge to Australians: Australia Day should be a day to ‘make atonement…a time to recognise our flaws and make up for them.’[5] I agree.

I have come to the view that Australia Day tensions will persist, and should persist, until our nation comes to terms with the wrongs of the past and resolves them through formal reconciliation—and by that I mean substantive reform, not mere symbolism. In 2016, I argued in The Age that Australia Day should be the date the nation votes for constitutional recognition, to ensure the injustices of the past will not happen again.[6] It should be the day we finally bring together our Indigenous heritage, our British inheritance and our multicultural triumph. A comment from a member of the public under the article suggested an efficient solution: why not hold the Indigenous recognition referendum on 26 January, then?

It made me think: rather than changing the date, why not transform and redeem it? Reform the Constitution. Sign the Makarrata. Unify the nation.

With a bit of vision, 26 January could be the date we do that which should have been done in 1788, and beyond: belatedly include a First Nations voice in the Constitution and establish the Makarrata Commission, as the Uluru Statement from the Heart requests, and bring together the three parts of our nation through a legislated Declaration enacted by all Australian parliaments, as the Referendum Council recommends.

If we did these things on January 26, the date would become a solemn day of historical reconciliation. A day of healing, resolution and inclusion. This to me seems the radical centre solution. It does not repudiate our British heritage, which is the only thing currently commemorated by 26 January. Rather, it would formally embrace our ancient Indigenous heritage and right the wrongs of the past.

Of course, to achieve such reforms—a Declaration, a First Nations constitutional voice, and a Makarrata Commission—whether on January 26 or any other date, requires morally courageous political leadership. It requires political leaders willing to lead for the national good, rather dog-whistling to try to win votes.

Turnbull and Abbott have demonstrated such leadership is currently absent. The Prime Minister, with head in sand, pretends the January 26 unites Australians: it clearly doesn’t.[7] Alan Tudge inanely parrots the three parts of Australia and pretends each is already equally celebrated.  ‘On Australia Day we increasingly recognise Indigenous people through the awarding of the Australian of the Year award to indigenous peoples,’ he said, bizarrely.[8] In other words: let’s appease our national guilt by handing out awards to Indigenous people (while also denying them a voice in their affairs). It is an argument for tokenism—dumb and disrespectful, even for Tudge.

These are not leaders who can take the nation where it needs to go. These people cannot unite our country. We will need a new government, a new Prime Minister, and a younger, brighter, better generation to rise to the fore.

In the meantime, let us make redemption of our national day our shared goal: we resolve to implement a Declaration, a First Nations voice, and a Makarrata. And we resolve to vote in politicians who will make this happen.

Why not keep the productive tension January 26 creates, and use this to propel change? Change to redeem the date, and make good, finally, on the secret instructions. Let us do that which should have been done in 1788 and in 1901: declare our shared country, guarantee the First Nations voice in our constitutional compact, and sign the treaty that will unite us as one Australia.

Shireen Morris is senior adviser and constitutional reform research fellow at Cape York Institute, the co-editor of The Forgotten People: Liberal and Conservative Approaches to Recognising Indigenous Peoples (MUP) and editor of A Rightful Place: a Roadmap to Recognition (Black Inc). Her new book, Radical Heart (MUP) will come out in July 2018.