In a 1994 episode of The Simpsons, grizzled barkeeper, Moe Szyslak, is revealed to secretly shutter his tavern every Wednesday night. He uses these evenings to read at the local homeless shelter. In my favourite scene, Moe reads—to his audience of Springfield hobos—the (fabricated) final line from Louisa May Alcott’s novel: ‘And then they realised they were no longer little girls: they were little women.’ Reverently Moe closes the book and a trickle of tears runs down his yellow cheek.

This is my go-to Little Women memory.

I first read the novel when I was ten or eleven. I hated it. Hated it wholly, hated it completely. Hated it mostly because my mum grew up with four sisters and a father who, while not away at war, died far too early leaving a houseful of estrogen in, ostensibly, a death match. The March girls tiffs were nothing compared to the battle royales I witnessed as a child. Little Women’s idealized sisterhood has always revolted me.

I may not appreciate the story but I’ve seen almost every film version. Gillian Armstrong’s 1994 take was on my undergraduate cinema studies curriculum. When I wrote a book on Christmas films, I watched a slew of spins on the sisters sacrificing their long-awaited Christmas breakfast to their impoverished neighbours. In writing two books on film remakes more recently, I revisited the story yet again, this time examining why certain tales—like Little Women—keep proving to be catnip for filmmakers every generation.

I had no interest in seeing Greta Gerwig’s incarnation and had intended to give the film the widest of berths until I read one tweet. One tweet that haunted me for weeks in a way no single tweet has any right to haunt.

Just before Christmas, Janet Maslin, film and literary critic for the New York Times, tweeted: ‘The Little Women problem with men is very real. I don’t say that lightly and am very alarmed. In the past day have been told by 3 male friends who usually trust me that they either refuse to see it or probably won’t have time. Despite my saying it’s tied for #1 of 2019.” 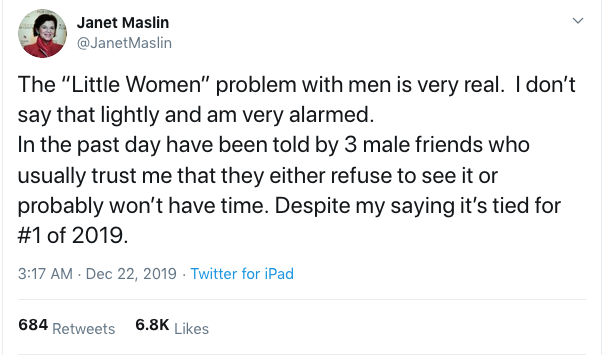 And it burrowed under my skin.

The thorough subjectivity of best films aside, why does it matter whether men see a film or not? Who cares if they make up excuses to avoid it? What makes Little Women uniquely worth their time and dollars?

I, of course, know the suitably feminist answer. In a world where women aren’t behind the camera enough, or given enough protagonist roles, or where ‘women’s stories’ aren’t given sufficient critical or audience attention or Boxing Day trumpet fanfare openings, we need to be supportive when a blockbuster like Little Women is released as a serious awards season contender. Agreed. And it’s genuinely a great thing when such a film does well because it means the next time a woman wants to make a film about women, her chances of funding increase.

But isn’t it okay to have films that explicitly—and maybe even exclusively—target women? Isn’t it perfectly acceptable for men not to be interested in every single film ever made? Can’t a film be good—even be great—and at the same time not seduce men?

The Alcott story has never courted a male audience. In fact, there’s a pivotal scene in Gerwig’s feminist reimagining where the gruff male publisher has no intention of buying Jo March’s manuscript. His daughters are the ones to convince him of its merits. Little Women is unabashedly a women’s story. And surely that’s okay. Surely that’s enough. Surely if there’s a point that we writers about gender and culture have been banging on about for decades, it’s that the things that women like are important too and that men don’t need to love it for it to be important. To be culturally significant.

But there’s something else about the Maslin tweet that irks. Why Little Women? I’m not asking why it was one of her favourite films—we like what we like, after all—but why does she care if men specifically avoid it? I don’t doubt men ignored lots of other women’s films released in 2019, so why does it disproportionately matter if Little Women got eschewed?

Why Little Women, say, and not Booksmart? The second-best film I saw in 2019, Booksmart is every bit a women’s story: directed by a woman, written by women, about the lives of women. And, unlike Little Women, it’s fabulous. Not only is it a better insight into actually being a woman today, but it’s funny and pithy and it received nowhere near the attention it deserved. So why aren’t men being guilt-tripped into seeing it?

Why Little Women and not Portrait of a Lady on Fire? The third-best film I saw in 2019, Portrait is also a women’s story: directed by a woman, written by a woman, about the lives of women. It’s also sexy and moody and melancholic. It’s even got period garb! Whereas many articles lamented men’s lack of love for Little Women, where’s the freak out about their absent love for Portrait? Where’s the accusations of misogyny to explain all those unpurchased tickets?

Come to think of it, why Little Women and not Animals? Why Little Women and not Untogether? If we’re being prescriptive about the kinds of films men should see to appropriately honour women’s stories, women’s lives and women’s art, Little Women doesn’t feel like the strongest case for this. In 2019 there were simply many more films about the lives of women that no one is mounting a special case for.

Scrolling the list of films I saw in 2019, I’d actually be far more inclined to suggest movies like Pink Wall, The Wolf Hour, After the Wedding, Maiden or Diane as more interesting and more unique tales of womanhood.

Equally, I’d nominate films like Untogether, Before You Know It, American Woman, Little Woods and The Quietude as much more insightful studies of sisterhood.

To frame Greta Gerwig’s film as some gold standard example of women’s art is problematic. For many filmgoers—certainly so for me—there’s a built-in lack of resonance with the flouncy dress/scarlet feverish/endlessly-forbearing women of New England yore. If critics feel a yen to manipulate men’s attentions, I’d rather steer them towards films that didn’t benefit from megabucks marketing campaigns. Little Women after all—happily—seems to have done pretty well for itself, thanks very much. There are so many better pop culture causes to guilt-trip men over.

Lauren Rosewarne is a Senior Lecturer at the University of Melbourne. Her eleventh book – Why We Remake: The Politics, Economics and Emotions of Film and TV Remakes – will be published in 2020 by Routledge.