You know that scene in Mean Girls where Regina George is wearing sweatpants on a day she’s not allowed to by her clique? The one in which she’s not wearing them because she wants to, but­­ because they’re ‘all that fit right now’? Privy to the dramatic irony of the scene, we know that her bodily incongruence is due to sabotage by the flawed heroine of the film, Cady Heron. Cady is feeding Regina Swedish protein bars to make her gain weight so rapidly she loses her hot bod/social position (which are one and the same, of course). Remember when Regina storms off and another girl who is actually fat walks past, slams into her velour-clad hips and quips, Watch where you’re going fat ass, and the whole canteen laughs? Like the ultimate punishment one can face is getting called a fatass by a fully objective fatass. Like the worst thing one can be in the world is the fattest person in the room.

They say that when you age you choose either your face or your ass. I don’t know who this ‘they’ is supposed to be but they seem to speak in dehumanising maxims a lot, and I’ve heard this one enough times for it to be engraved in the limited real estate of my brain. You choose the fatty deposits in your cheeks or the thigh gap between your pleats. There’s this skincare ad I saw in the early two thousands that’s been rolling around in my head since: your mother’s wrinkles, your daughter’s pimples. It conjures the most horrific of chimeras, reflected in its double-edged sword like a wrinkly, oily gorgon.

There are so many things to worry yourself into wrinkles or fat-rolls about. When I was five I was lonely, sad, feeling abandoned. I anxiously ate a whole box of chocolate royals while mum’s friend was babysitting me. She yelled at me for being greedy. Watch where you’re going fatass.

When I was fourteen my sister and I walked into my grandma’s house. Grandma grabbed my sister around her waist, pulled her onto her lap and exclaimed ‘Eloise, my goodness you’ve lost so much weight!’ My sister looked at me apologetically, and said with a soft, bruised voice: ‘I’m Stephanie.’ Watch where you’re going fatass.

The other day I went and saw Grandy and the first thing she said to me was ‘I’ve lost ten kilograms!’ The next thing was that she doesn’t eat bread anymore. She made us lunch and sat there, not eating any.  Watch where you’re going fatass.

Every day my father eats stone fruit. He doesn’t eat lunch. He goes for a run around the tan instead. Watch where you’re going fatass. 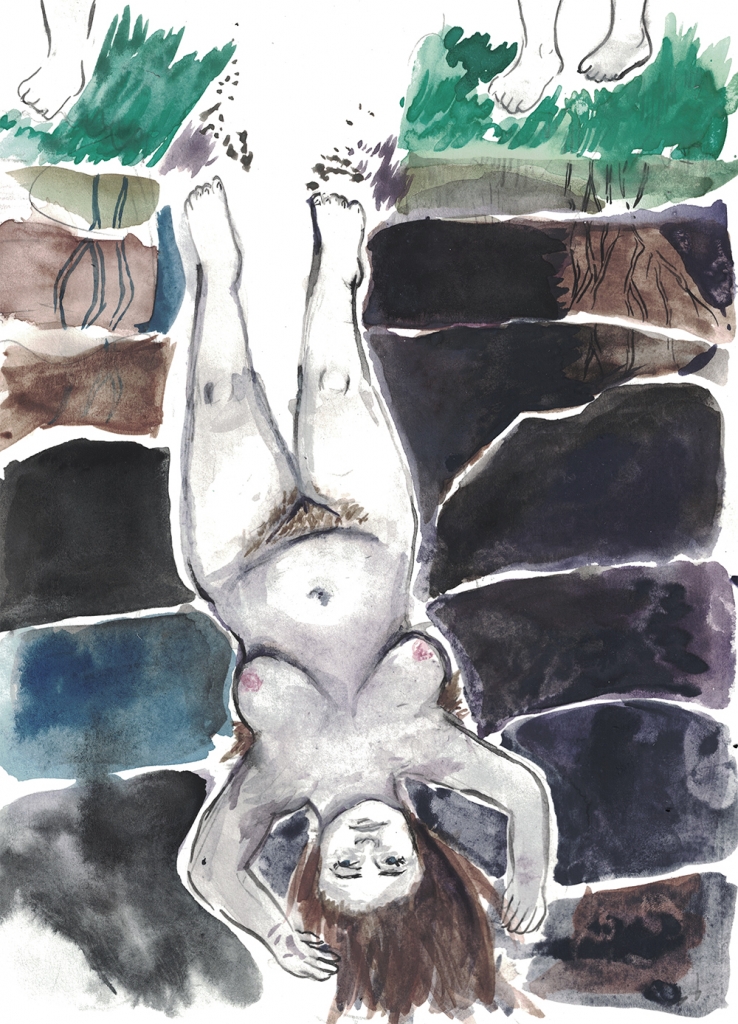 There’s this reality show called True Beauty from the early two thousands that I’ve been watching. It’s a competition to find out who is the ‘true beauty’ amongst a bunch of people who are the pinnacle of attractiveness according to the standards of the era. The whole idea is that they THINK they are being judged solely on their physical beauty, but they’re ALSO being judged on their inner beauty. So it’s not even an either/or scenario, which is what I initially thought when my friend told me about the premise of the show. They are being judged both on their looks and the content of their character, which I think is an ethical pedagogy intriguing in its deep-seated fucked-up-ness. There is a rejection of the Kantian mind-body dyad—they’re interwoven, irrevocably so—but ultimately, outside beauty trumps inside beauty. Outside beauty is the blind bet, the necessary cornerstone on which the game is built. Inside beauty is just a wildcard. There are no ugly contestants on the show; there are no fat contestants. At the end of each episode the eliminated person’s portrait is removed from the wall by a janitor. The janitor takes it from the gallery of portraits still containing the more hot and more ethical contestants who remain, places the portrait in a dumpster, and wheels them away. Less-hot people don’t get to ride in the dumpster at all. I don’t know where the janitor fits into all of this.

My therapist, god love her, always finds a way to ask how I have been eating. Watch where you’re going fatass.

I draw lots of naked self-portraits. I started doing this when I was writing a column for Scum Magazine about my life. I aimed to write baldly and unapologetically about myself. As it turns out, the times in my life that are the most bald and unapologetic cut closest to the skin. I sawed through my casing until you got to my birthday suit. I wanted to draw the moments when I was in ecstacy in bed with my partner or lying catatonic in bed unable to process the world or naked and masturbating in the bath as self-care. I wanted my parents to stop reading my work.

My uncle once told me to stop putting near-naked pictures of myself on the internet. Whenever anyone says anything to me like this I turn into Erin Brockovich and say: ‘they’re called boobs, Ed’. Or at least, I wish I did. Due to the chronic brain-to-mouth time warp I find myself stuck in as a writer I just said nothing and then thought of a nonsensical pop culture zinger months later. B-doom-tssssssssh.

When I was fourteen a friend of a friend came to Southland with us. She said that my face shape was pretty, and my features were too, but together they were not.

When I was fourteen I worked at a Hungry Jacks. A guy came in and said he wanted to be served by Anna. I told him I could serve him, and he said he wanted someone good-looking.

When I was seventeen I worked at a bakery in a strip mall between a video store and a 7/11. I would pick up a snot block, take a bite, and throw the rest in the bin. I was trying to be good; I gained fifteen kilograms in a year.

When I was nineteen I went to a high school reunion and a girl said that I was the most improved, looks-wise. Another friend asked me how I had lost the weight and I said: drugs.

My last job was in a school office and I weighed more than I did at seventeen. If you’ve ever worked in an office you’ll know that it’s a real mind-fuck when it comes to these things.

I’m pretty sure there is an ancient theory that says that the amount of chocolates in an office multiplies exponentially the amount of anxiety around eating said chocolates. There is a game of impossible long division every time someone requests a smaller slice of birthday cake. A desperate mantra, repeating over and over, a battle cry that screams inward at 120bpm: We are trying to be good this week. We are trying to be good. 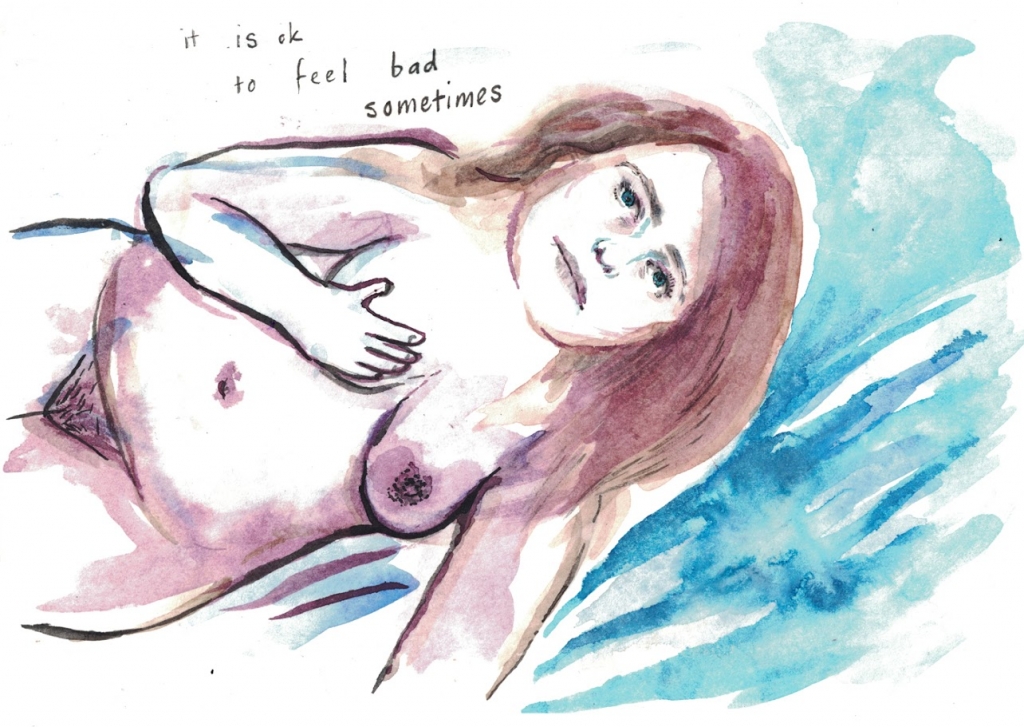 When I went to live in Japan at twenty-two, I told everyone I was going because it would be nice to teach kids and to learn about a new culture. Really I was going as a way of waiting out and hiding from my thoughts about my body. It bought me time to wait until I was comfortable. I would sit in isolation, grow my hair long, lose ten kilograms. I would come back when I was hot enough. I would wait until I had a body that was acceptable.

I did lose weight because I didn’t eat and drank instead. My hair did grow and I pulled on it and picked at my scalp anxiously until it bled. I stayed up all night hating myself and it didn’t make me feel any better. I chose losing my ass and I suffered. I left Japan early, came home depressed, a skinny girl with pallid skin and a sad brain. A mishmash of disappointments, a chimera of failure. My mother’s wrinkles, my daughter’s pimples.

Counting calories. Counting wrinkles. Counting kilos. I’ve never been much at maths but keeping a leger of all these things comes easily to me.

The best thing one can be in this world is a thin person, but I wouldn’t know about that.

I wanted to apply to the Bachelor as a joke but one of the application’s first questions asked for your measurements. Now I guess the joke’s on me.

Things men have said about my body to me in an intimate naked setting:

‘Your tits come from nowhere’.

‘I love hearing your fat ass slap up against my balls’.

‘I love your belly’.

It’s hard because none of these are objectively bad things, they should not be objectively bad things. But I don’t know who gets to hold the cone of objectivity, who the arbiter is. Or perhaps I do and that’s why these things make me so uncomfortable. I know what the standard is, and it’s far, far, far from a median. There’s no way of accounting for the gap between this and reality. There’s no way of holding these standards out. They are tigers crawling over the zoo walls at night, pacing the city streets. Staring at you dead in your big fat eye, hissing watch where you’re going fatass.

I’m sorry, I didn’t mean for this to be such a dark thing. Diet culture is like this tunnel and it’s only the people who are thin who can fit through the crawl hole and escape. Or maybe no-one can escape. I hope there’s a way.

One way of empathising with oneself, for people who don’t have much time for their own feelings, is to imagine you are a different person. Not a thin person, not a perfect person, just anyone else, a human being with feelings that are valid. You tell this person the things you tell yourself every day and you ask yourself if it’s fair. Usually, on a good day, you can tell that it’s not.

She is brave and she does not put up with my bullshit.

She is vulnerable and open and naked and she likes to fuck and she does not give one. I can see her from the outside, I can feel her on the inside.

I can choose not to throw her to the tigers, if I want. 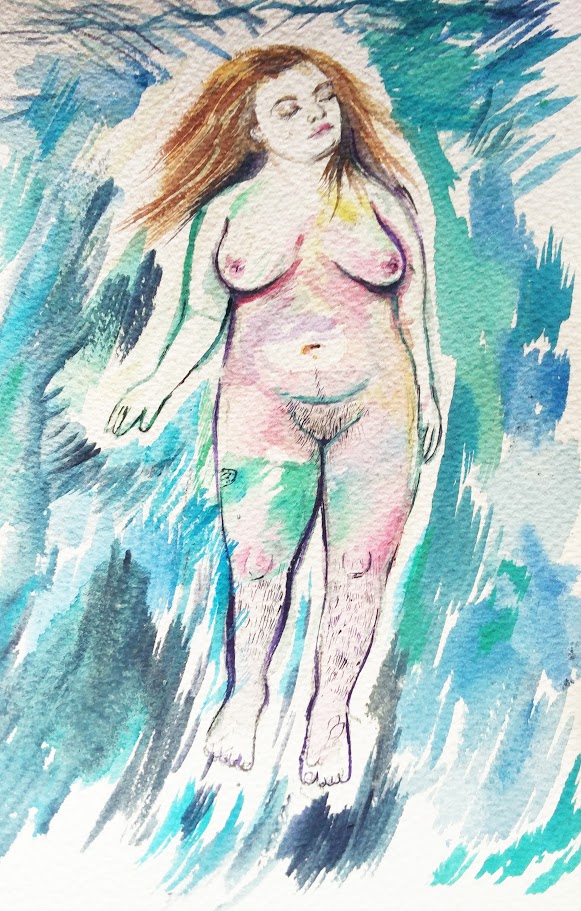 Eloise Grills is a comics artist, essayist, zine-maker and poet living in Melbourne. Her work has been published widely, most recently in The Lifted Brow, The Spinoff and Queen Mob’s Teahouse. She edits memoir for Scum Magazine. She tweets and grams from @grillzoid, and uses Patreon to cover her arse: www.patreon.com/grillzoid/


Some of the images in this piece have previously appeared in Scum Magazine, The Lifted Brow and Girls Will Be Girls.