Earlier this month I declared on Twitter that I’d adopted the term ‘birdster’ to describe people who love birds but who aren’t obnoxious about it. It was a joke; little did I know that only a couple of weeks later people all over Australia would turn out to be birdsters.

The Guardian’s ‘Australian bird of the year 2017’ poll on Monday came out of nowhere, unanticipated and unexpected, like a vagrant bird that takes a turn down the wrong migration route. Such vagrants do occur, and if you’re a twitcher you’ll drop everything and rush to see one; but if you’re a birdster you might instead agonise over whether to vote for an kookaburra or a pardalote on the internet. 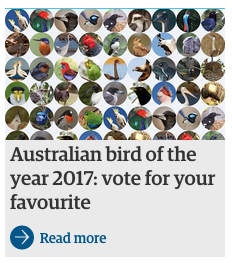 I’ve been birdwatching since I was 12 years old, but I’ll side with the birdsters over the twitchers every time. Once I overheard two women talking about parrots: a rainbow lorikeet flew overhead and one of the women told her friend earnestly and with great affection: ‘I love rosellas’. A twitcher would’ve corrected her, but a birdster would just recognise a kindred spirit. The point is not to know the species but to unabashedly embrace its presence.

The joy of the Guardian’s poll is that it smashes straight through the gate-keeping that’s often attached to birdwatching. Birds are the most obvious group of animals in the world; you don’t need to be able to tell a shirke-thrush from a cuckoo-shrike to hold deep affection for them. On a 45-minute ride home from work through inner suburban Melbourne I count 35 different species of bird. Australia has close to 1000 bird species so choosing only one as a favourite is ridiculously daunting.

I voted for the pied currawong. It’s not a popular choice—especially when I explain my love for currawongs by saying they’re the foxes of the bird world. They have the same cunning, there’s the same intelligence in their eyes: watchful, patient. When Australians think of foxes though they think of dead bilbies; likewise pied currawongs mean baby fairy-wrens torn from the nest.

But here are the real reasons I voted for the pied currawong as my favourite Australian bird: because I can remember vividly, sight and sound, waiting for my dad to pick me up one Canberra evening at dusk and a flock of them singing from the buildings around me. The whole repertoire: the clarg-clarg, cala-la; the ca-laaaw; the currawong, currawong. Because currawongs have accents, and when I first heard them singing in Melbourne the phrases were familiar but the intonation was as different as glass is from water. Because I’ve been in Melbourne for fourteen years now and I can no longer hear the difference and maybe that means Canberra’s no longer my home and Melbourne is.

The fact that they’re everywhere and that they seem like a kind of nonchalant miracle means birds are ready repositories for our nostalgia and sentimentality. This gives them a unique place in the public consciousness but it also blinds us to the fact that so many of them are under stress. Australian white ibises, the bin chickens of repute which seem set to win the poll, are scraggy white geniuses of survival and adaptability. Currawongs are no less so, in their way. They may not forage in the detritus of human civilisation like ibises do but they know an opportunity when they see it. From the valleys of Canberra they’re supposed to migrate into the mountains come summer but they haven’t done that for generations. Why bother? A city’s a feast all year round. That’s why noisy miners are swarming too, and rainbow lorikeets. The changes to Australia’s birdlife since European arrival are not always the ones we expect.

Birds, often, are gateways to a love of the natural world. As we impose ourselves upon the environment around us in ever more ruinous ways that’s a love on which the very future of our planet will depend. We need to talk about this if we’re going to change it. The Guardian poll’s a fun diversion at the start of a working week. After it’s done we’ll all move on to the next distraction. But perhaps every now and then someone, somewhere will stop and think about whether they should’ve voted for the magpie instead of the willie wagtail. And then maybe they’ll ask a friend whether they voted in the poll. And then we’ve got the start of a conversation.