Ladies and gentlemen of the jury, a thread. I put it to you that a great rabble of opinion writers, especially on the right, in the interest of criticising Australia’s lockdown policies, have magically and mindlessly transformed Sir Peter Ustinov into Clive James.

For what it’s worth, the comment was also reported in the Sydney Tribune’s ‘1 Minute Parking’ column on 20 September 1978. 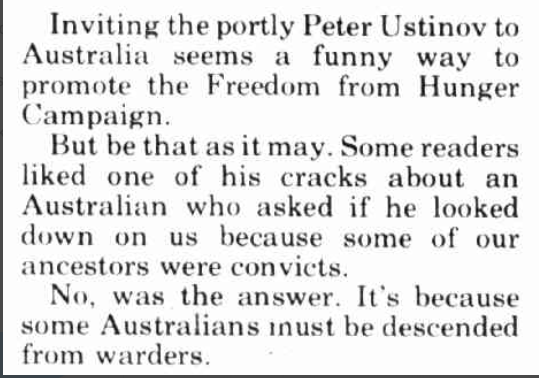 It doesn’t matter whether Ustinov was ever actually asked this. Being Ustinov, which is to say one of the great raconteurs, he wasn’t above repurposing a good bit. When he told @ProfSteveKeen the story, the journalist became a racist cab driver.

Magnificent raconteur and wit that he was, I'm sure Ustinov used it in many forms subsequently to first uttering it. But that's how he said it in my Freedom From Hunger "Ideas Centre" office in the late 1970s ('79 I think). pic.twitter.com/xQyWnHoIEL

[UPDATE: I have been informed by @ProfSteveKeen that there really was a racist cab driver—Steve met him—and that the conversation has been recorded verbatim. Either way, Ustinov used the line more than once. Which is fine. It’s his line.]

A paper by historian Peter MacFie, ‘Dobbers and cobbers’, also cites the story. The paper appeared in Papers and Proceedings, the journal of the Tasmanian Historical Research Association, in September 1988.

And in the second chapter of William De Maria’s 1999 book Deadly Disclosures: Whistleblowing and the Ethical Meltdown of Australia. My point is that it pops up quite a bit and isn’t terribly difficult to find. (We’ll get to why it’s taken me so long later.)

On 24 August 2020, when Melbourne was in the midst of its infamous second lockdown, Sussex-based ‘libertarian writer and researcher’ @cjsnowdon tweeted a half-remembered version of Ustinov’s bit. He thought it might have been Clive James. Honest mistake.

To be fair on @cjsnowdon, someone told him it was James five years earlier. The same tweet was addressed to @_HelenDale, which will become relevant, and kind of funny, in a moment.

Anyway, about a week later, on 2 September 2020, British writer @guybirchall, who follows @cjsnowdon, writes a piece for the state-owned Russian media outlet RT. He uses a syntactically tortured version of the line that’s nowhere else in existence. He frames it as a direct quote.

Three days later—we’re gaining momentum now—on 5 September 2020, @RebeccaWeisser trots out a paraphrased version of the line in The Spectator Australia. 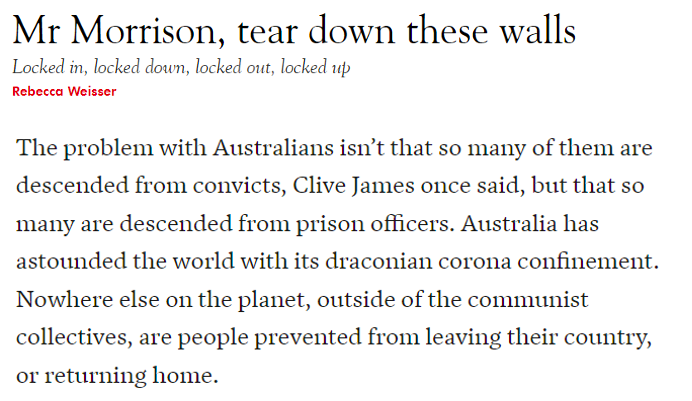 Allow me a brief detour at this point as the roads diverge in the wood. @benv_w has suggested to me that @_HelenDale (“Australian literature’s lone classical liberal”) becomes relevant at this point.

He cites her 23 December 2020 piece in Standpoint, which uses a similar line. But crucially for our purposes, @_HelenDale does not attribute the line to James. In this piece, at least, she doesn’t attribute it to anyone. 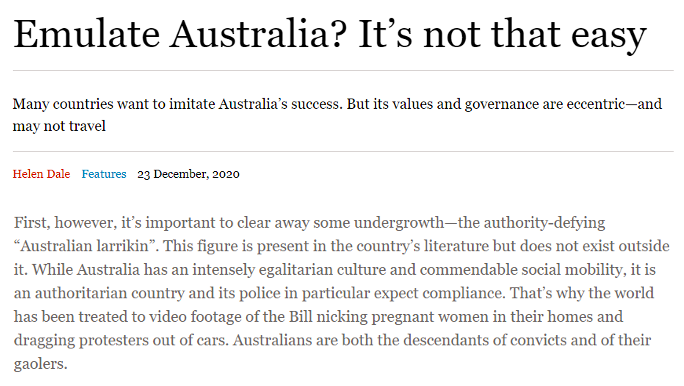 I don’t think that counts. Also, to be fair on @_HelenDale, in a 12 November 2020 CapX piece, and again in a 26 September 2021 interview with @GBNEWS, she credits Melbourne University’s @DrKatyBarnett with the line, which the latter used in a Quillette piece on 2 October 2020.

I know it was five years ago and that no one really remembers random tweets, but I still think it’s funny that both @cjsnowdon and @_HelenDale were told it was James by some rando at the same time. This is very much one of those right-wing ecosystem things. [Update: I also think it’s funny that the author of The Hand that Signed the Paper is the only person in this saga who doesn’t mis-attribute the line to James.]

You might have noticed that it’s also peculiarly British. A lot of British and UK-based writers, writing for British publications and their Australian spin-offs, about the prisoner island. They’re the ones who sent the gaolers here!

Anyway, all that’s about to change in a moment with the entry of the Australians into the race.
On 4 December 2020, @JustTwenteen uses another paraphrased version of the line in a piece for the London Telegraph. To her credit, Sarah is thus far the only journalist who has gotten back to me with a source. 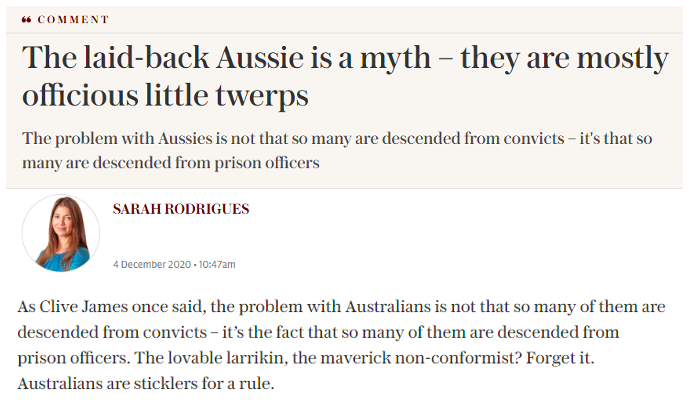 The editor who commissioned @JustTwenteen’s piece asked her to include the line and provided her with a link: it was to @RebeccaWeisser’s Spectator Australia piece. (Sarah seemed pretty embarrassed about the whole thing when we discussed it.)

A special shout-out to Steven Schwartz from the Centre for Independent Studies. On 9 February 2021, he attributed the line to James in The Spectator Australia. On 21 February 2021, he did the same thing in The Australian. Contrast and compare. 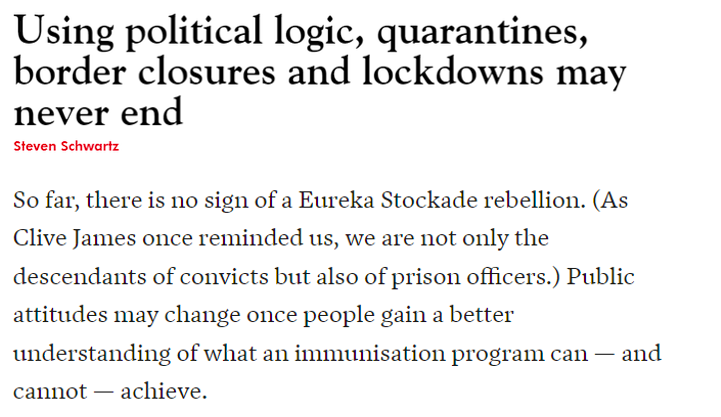 There are changes to the first couple of paragraphs before Schwartz regurgitates the previous piece. As a former freelancer, I admire this chutzpah. It also serves as a nice little metaphor for the whole stinking thing.

You will have noticed that, until this point, with the sole exception of @guybirchall, none of the writers have dared to attribute the line to James as a direct quote. That changes on 6 May 2021 with @PhillipCoorey‘s decision to whack it between quotation marks in the Australian Financial Review.

There are now two, different, directly-attributed quotes in circulation. One of them must be wrong, right? Or, given the sentiment doesn’t really align with any of James’s public pronouncements on Australia, they both are.

As @_ColdHands_ pointed out to me back when I started looking into this, neither version exists in the online database of all James’s published works. Which isn’t really surprising given it’s Peter Ustinov’s bit.

Searching the https://t.co/bQhq1laKtz for "convict", "prison officer", "prison guard", "warder" & "wardens" have all failed to locate it, so it's not in his printed works. If it's authentic, it must be from his TV work. 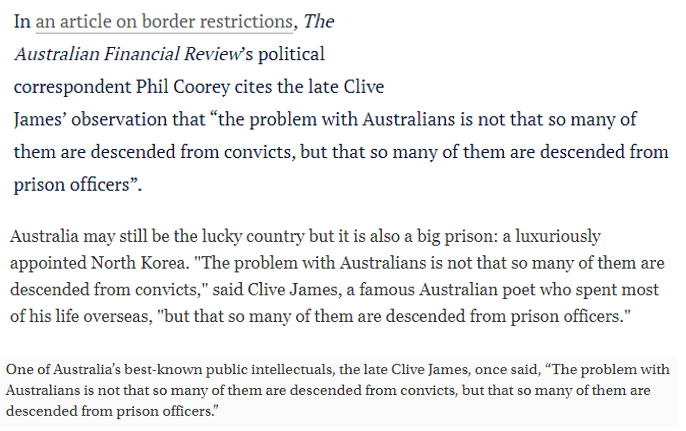 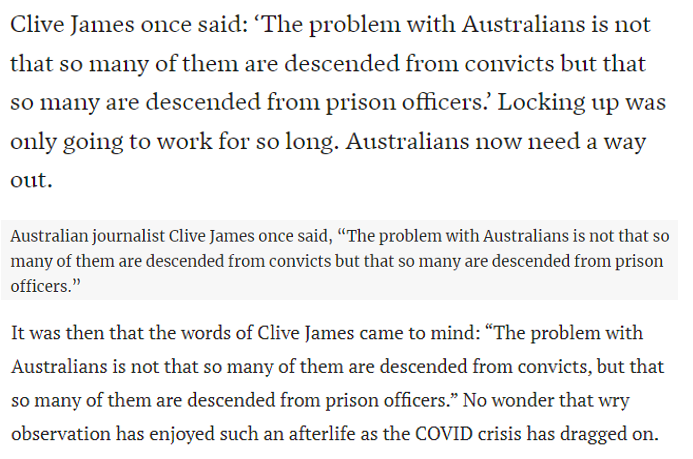 I mean, literally as I’ve been writing this thread, The National Review has published an article asking: ‘When Will Someone Hold Human-Rights Hearings on Australia?’ It quotes the line. It is a direct quote. It is attributed to James.

There can be no question that @PhillipCoorey’s piece was the turning point here. It laundered the line. It’s everywhere now.

Is it possible that Peter Ustinov told Clive James this story and that James went about using the line himself? Sure. But I can’t find any evidence of that and none of these writers can, either. They have been cannibalising one another. It’s turtles all the way down.

Or, to put it another way, it’s a Matryoshka doll of bullshit.

Don’t get me wrong. I agree with Ustinov’s sentiments. Australia is a country of narcs. We are, to borrow from Lawrence of Arabia, petty, barbarous and cruel. But Ustinov wasn’t talking about our lockdown policies. He was talking about us as a people. It’s different.

Why, then, do I care? I care because, for all his faults, I still value Clive James’s work, and I think there’s something pretty disgusting about putting words in the mouth of a dead man.

I care because these people are supposed to be journalists—most of them, anyway—but haven’t shown the slightest interest in doing the most basic work of journalism: checking one’s sources.

And I care because, when I look around and see where else this quote has been rocking up lately, I feel I need to wash my eyes out with soap. Clive James, the author of Cultural Amnesia, is being turned into an alt-right meme.

Search ‘Clive James’ and ‘convicts’ on Twitter. Google it and follow the Facebook links. Be prepared to read about Ivermectin. Go on. You’ve read this far.

I said at the beginning that I’d explain why it had taken me so long to get here. It’s kind of embarrassing. The thing is, because there are so many nut jobs out there, passing off the quote as James’s, I was making a point of avoiding links to unknown Twitter accounts, etc.

As a result, it was only this morning, when @cityoftongues suggested that the quote might have been Peter Carey’s—it isn’t, people!—don’t attribute it to him!—that I got back onto Google and finally stumbled across @cjsnowdon’s tweet.

Peter Ustinov I believe is the originator of this in a true story.

Assuming that @cjsnowdon’s tweet—which, again, I believe was an honest mistake—was somehow the beginning of all this, then the writer, or writers, who first encountered it would have also seen @CountofDown‘s response.

I should point out that it took me about as long to confirm that Ustinov had told the story as it took me to determine that the line probably wasn’t James’s: about five minutes.

I’m still willing to believe that Clive James said it, by the way. He did a lot of television work. As @_leo_s has observed, there is still the lost NRL Footy Show tape to track down.

If someone can source either of the direct quotations for me—either @guybirchall’s RT one or @PhillipCoorey’s viral AFR one—I will be a much happier man. I will also eat my shoe.

Here, then, for your viewing pleasure, is a compilation of all seven interviews Michael Parkinson conducted with Peter Ustinov. Ladies and gentlemen of the jury, I rest my case.